Wind Man's stage is one of the more dangerous, and also can prove quite irritating, but it's a great starting point because its boss is reasonably weak to your standard arm cannon. 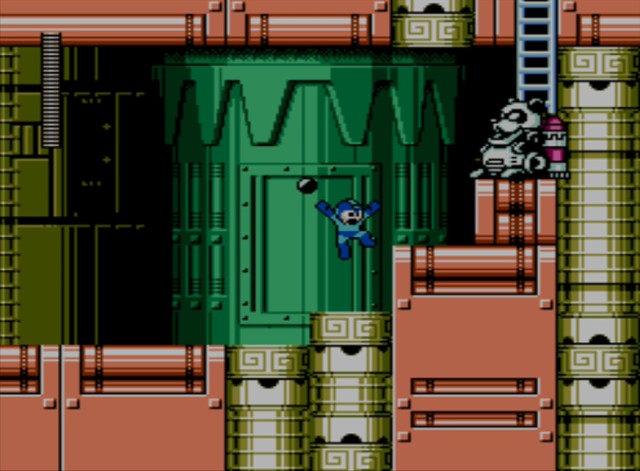 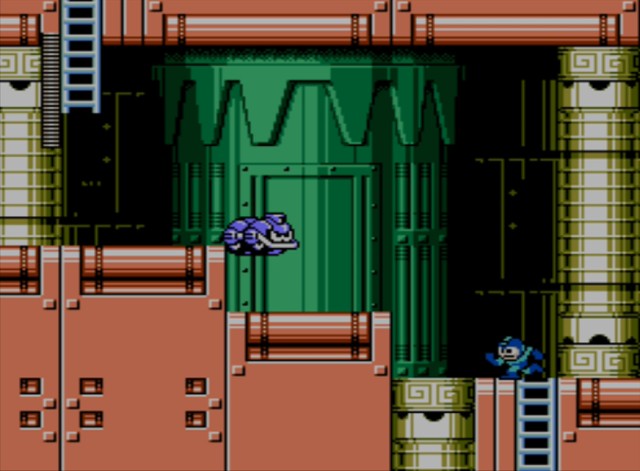 From the beginning, head toward the right with your arm cannon charging as you advance. That's a good idea in any Mega Man game, really. That way, you can eliminate enemies you might happen across, before they have a chance to mount an attack. In this case, it puts you in good shape to inflict most of the damage required to defeat the first enemy, which looks like a bear and launches shells in a high arc. Continue right from there, along some steps, defeating another such enemy and climbing a ladder into the next room.

Here, a caterpillar-shaped foe will roll toward you. Wait at the top of the ladder you just climbed, charging your arm cannon, and then let loose the charged shot when the enemy drops to your level. Then climb another ladder. 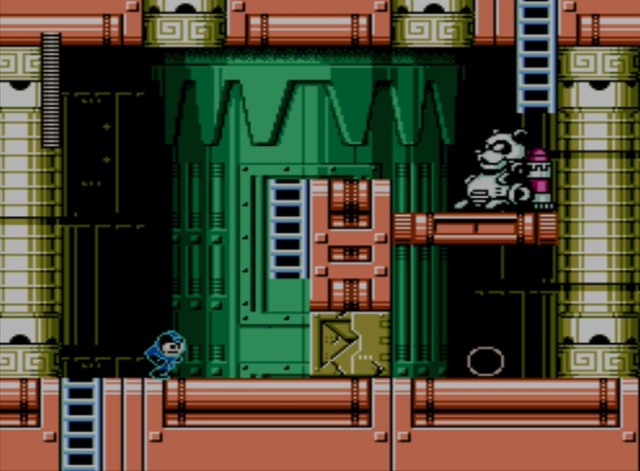 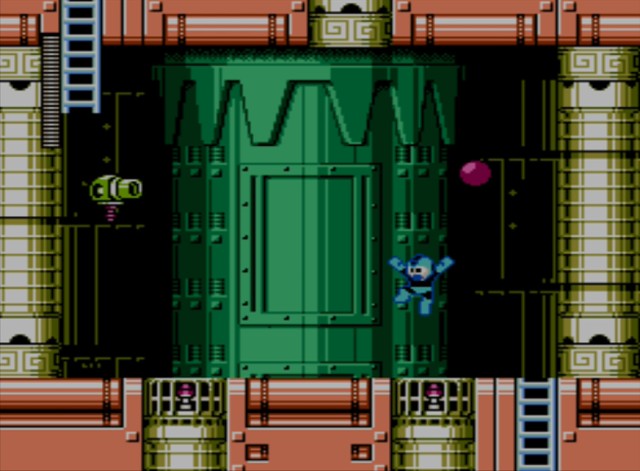 Next you need to defeat another of the bear-shaped enemies. You can stay at a safe distance and jump and fire charged shots to defeat it, since your shots pass through the ledge. That's safer than trying to climb the ladder and getting close to its arced shots. Once you defeat it, climb the ladder.

In the next chamber, a green cannon floats near the upper left side of the screen, just ahead of a ladder. As you cross this room, the giant fans along the room's base will cause you to gain elevation, perhaps making you collide with shots from the cannon, so it's important to hit it with a quick charged shot or two. That way, you can minimize damage before crossing the room and climbing the ladder into the next area. 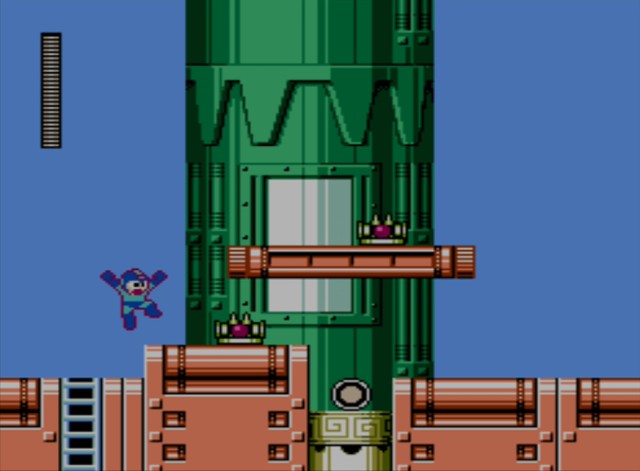 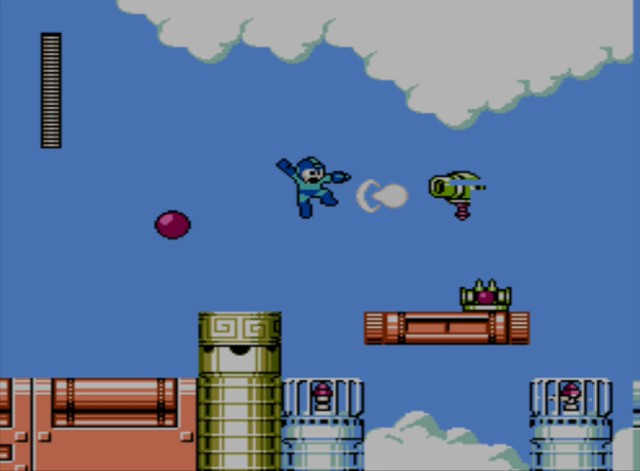 Enemies you encounter here are tricky because they slide back and forth along the ledge, and their speed increases if they're on your level. Let them start in the opposite direction, then hop quickly to the ledge and be ready to leap over them as they slide back your way. Proceed toward the right in this manner.

You'll have to let more fans give you the elevation you need to continue here, and watch out for the green cannon. Take it out quickly before you try to advance too far. Beyond that, you'll also find a second such cannon. You're best letting the fan just ahead of it keep you in the air as you pelt your target with shots, then push to the right when you are at peak height and the sliding enemy is headed back toward the right. Land, jump over that foe, and then keep going through a rather dangerous area. 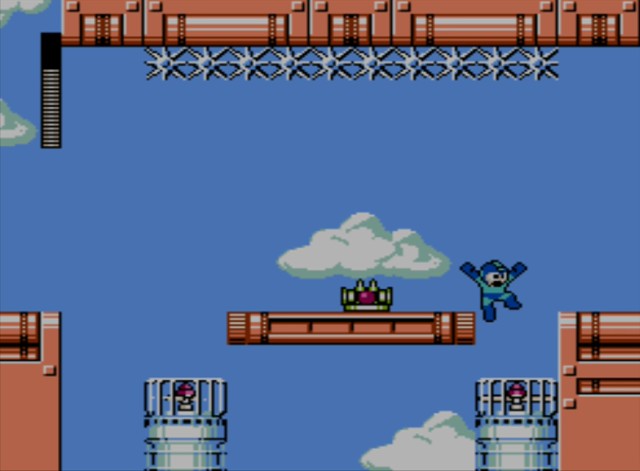 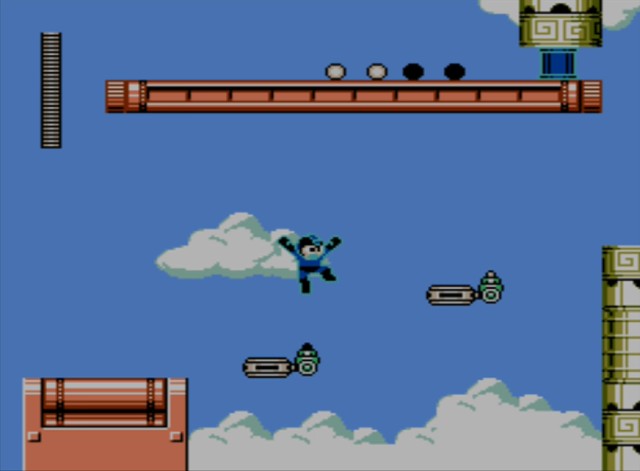 The fans here will send you quickly skyward, which is normally good but not here. Spikes line the ceiling, and brushing them even slightly is fatal, even with a full life meter. It's better to push to the right and take damage from the sliding foe, if you have a choice in the matter.

Continue further right and you'll find a new sort of threat: platforms. When you jump on one, hesitate for a split-second, and then jump right. The platform on which you stood will quickly slide to the right and allow you to find solid ground once more. If you stay in place, you'll just drop to the ledge. Further to the right, you have to keep moving along similar platforms, which are now suspended over a bottomless pit. Cross along several of those to reach and climb a ladder (the good news is that if you do happen to die here, you've reached a checkpoint and won't have to repeat the stuff that came ahead of that). 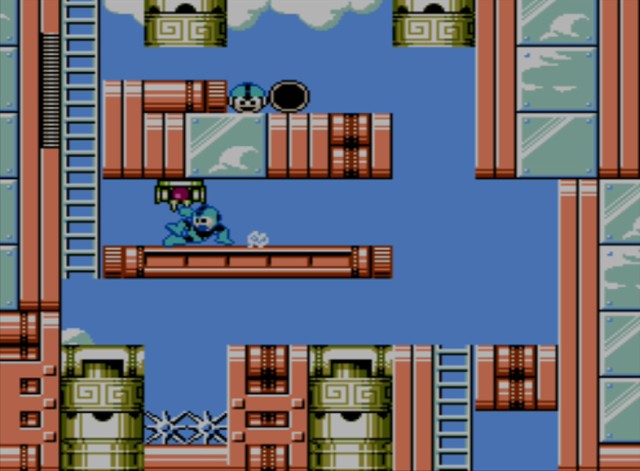 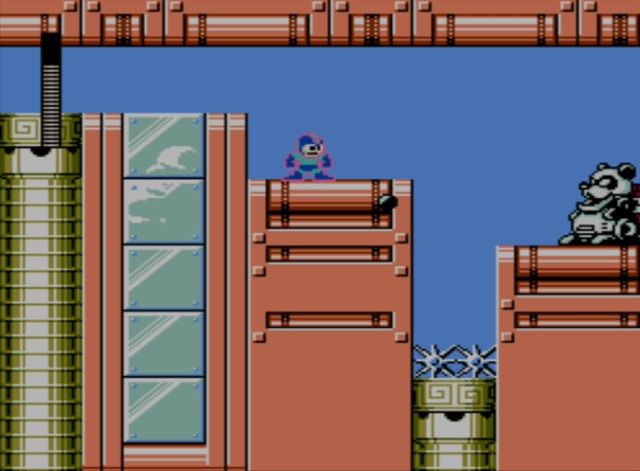 Once you climb the aforementioned ladder, you'll find yourself in a chamber with a 1-up icon and some energy resting on a high ledge. Below that, one of the sliding, spiked enemies is hanging from the ceiling. You can easily slide under him and climb the ladder, and it's also easy to slide quickly to the right for the extra life and energy, if you're in need. Then climb into the next screen.

You'll see another of the bear-shaped foes. Defeat it in the usual manner and proceed to the right, where you'll find yet another. Stand at a distance, so that he's just barely on the screen, and you can hit him with charged shots from the ledge. Then hop over the spike pit and keep going. You'll need to kill one more of the bear sentries before you can pass through an opening. 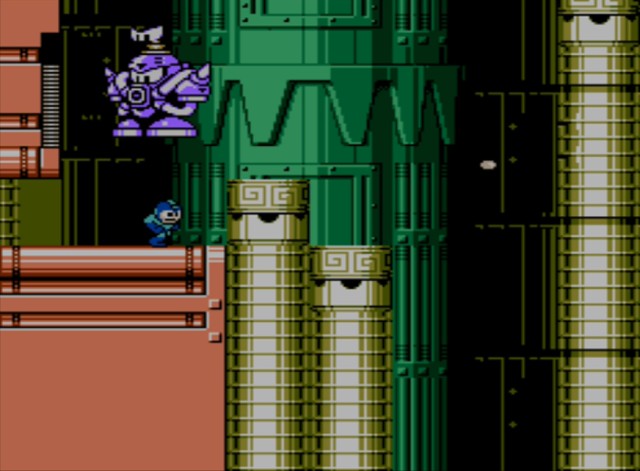 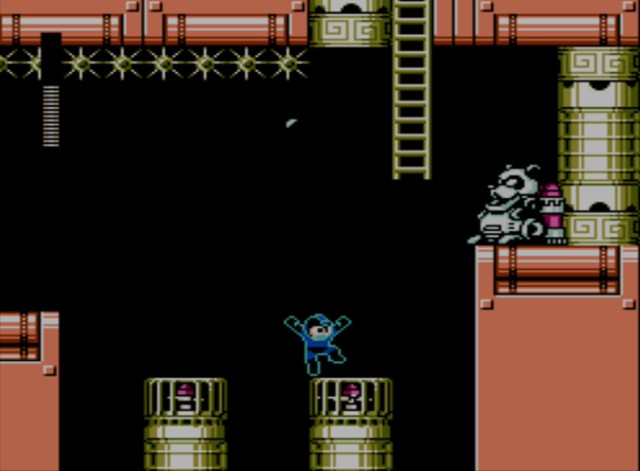 In this area, a powerful enemy leaps toward you. The best strategy seems to be to start slightly forward as you enter, then let him leap in the air. With luck, you can slide under him, then quickly hop over the short wall to the right and drop down through the opening without taking damage.

Try to hug the wall to the right, and then face left as you land. Blast a few caterpillar-shaped enemies that roll toward you, then drop through the next opening. Now you must proceed along a series of ledges with more of the bear sentries. They're easy to defeat, but mind the pits and don't let any fans blow you into spikes along the ceiling. The guy on the far right likes to hit you with a few shots, but that's better than a fatal brush with the spikes. It's sometimes possible to make it up the ladder without tending to him, but usually you'll just take damage and fall back toward the fan. Fortunately, the next screen lets you fill up on energy and then you can head to the right to face the area boss.


Your greatest risk from Wind Man is that he will collide with you. Avoiding him is trickier than you might suppose, too, because he has the ability to suck you toward him. 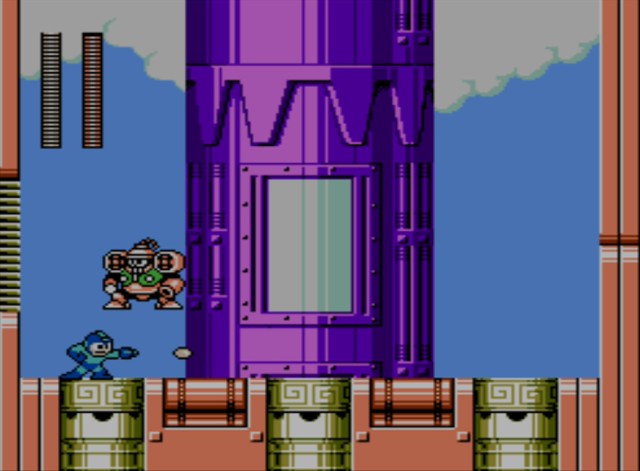 As the fight begins, Wind Man will often lift into the air, then fly forward and come crashing to the ground. He typically won't entirely cross the screen, but that doesn't matter. You need to slide under him while he's airborne and get some distance, or else you'll be cornered and perhaps take a lot of damage.

When he lands, Wind Man will either try to suck you back toward him, in which case you should repeatedly slide in the opposite direction, or he'll toss a couple of whirling blades your way. This he may do twice. They're easy to jump or slide between, once you see their pattern of movement, but don't jump so brazenly that you get too close to your foe. Always be ready for him to fly across the screen, and always keep as much distance as possible. As for your own attack, you should just blast him with charged shots when you can do so safely, or regular shots in a pinch. His life meter shouldn't last too long. The important thing, of course, is that yours lasts longer.