The first stage of the castle is a good warm-up for what is to come. Begin by equipping the Metal Blade weapon and heading to the right. The birds you've no doubt come to love will zip across the screen above, dropping their eggs, so be prepared to nip that problem in the bud with some diagonal blade shots. You'll soon come to a short, stone tower, and the easiest way to scale it is to use Item-3. Hop on board, ride up the wall, then keep moving.

There are plenty of hardhat enemies just beyond, so take those out as appropriate and move on until you've reached a second surveillance tower. Scale this wall, as well. On the other side, there's a station that generates projectiles, so use a Metal Blade to take those out and fill up on any necessary life and special weapons energy. 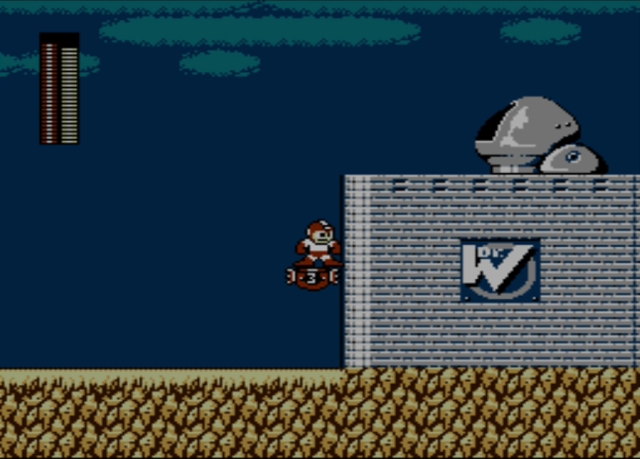 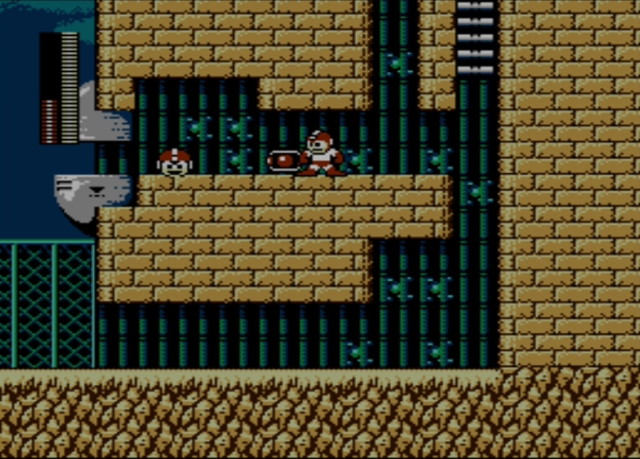 When that is tended to, turn your attention to the stone wall at your right. Use Item-3 again to scale this. If you're having trouble, press 'A' and 'B' at the same time while near the wall and you should be able to place the item and ride it. If you try to press one button at a time, you have to be more careful with your timing.

Partway up the wall, you can head left for an extra life and a special item refill tank, but doing so means you'll likely have to drop down and then ride Item-3 up the wall again. If you need to, you can head back left and shoot projectiles for energy.

Once you do climb the ladder along the right side of the screen, you'll find yourself near one of the shielded soldiers, so exercise caution as you take him out while avoiding his shots. You can stand below and chuck Metal Blades diagonally to finish him off, if you want. 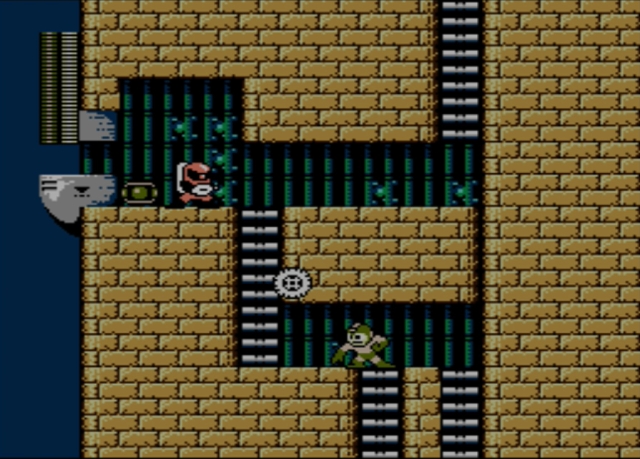 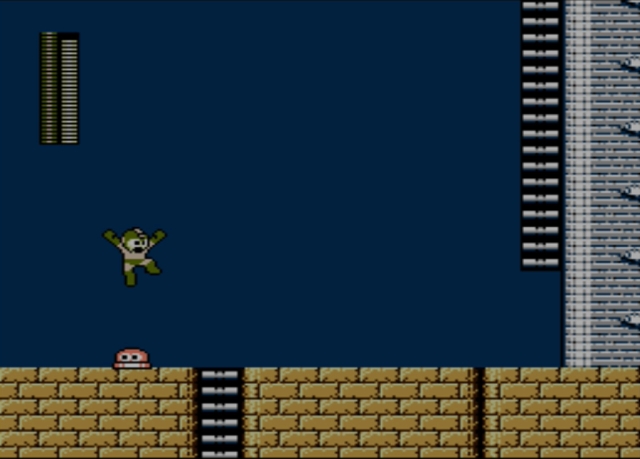 The ladder on the right side of that screen leads to yet another armored guard, whom you should take out as you did the one previously. This is the stage's halfway point screen. The next ladder takes you up to solid ground, and another of the springy monsters. You can wait for it to pass, or you can quickly climb to the top of the ladder and hop left, then hop back right and over the robot as it rapidly approaches. Then go to the wall and climb the next ladder to its top.

You now will find yourself looking out to the left, over a pit. There's a ladder in the upper left hand corner, but reaching it can prove difficult. Switch to Item-1. Now, you will need to hop out using three of the ledges to reach the ladder, without falling too short or gaining too much elevation. If you create a ledge, then jump, then create a ledge, then jump, and repeat, there's a good chance you'll get too high and bump your head just short of grabbing the ladder. Instead, press 'A' and 'B' simultaneously as you make three swift jumps to the left. You'll arrive at the ladder with plenty of head room to spare. 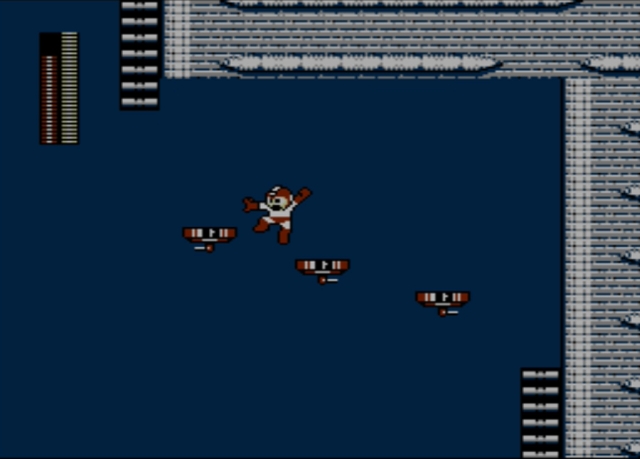 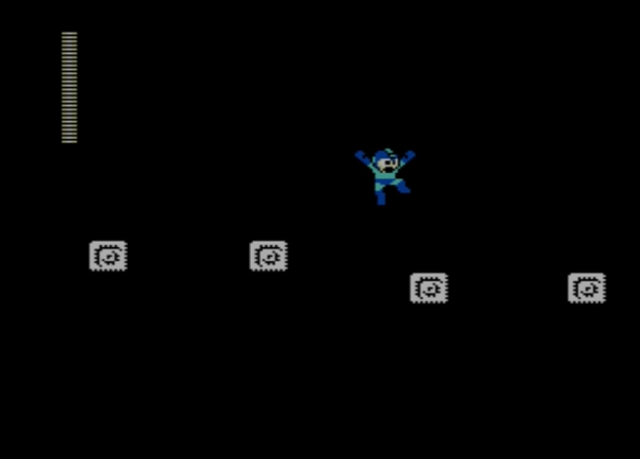 When you climb to the top of the ladder, the stage is almost over. Head right along the lengthy ledge, cross along two longer ledges, and ahead you'll see a series of single gray blocks suspended over space. Start crossing those and you'll find yourself in the midst of a prelude to the impending boss battle.

As Mega Man works to cross the wide, bottomless pit leading to the right, the game will slow slightly and a huge monster will rise from the depths behind him. If Mega Man hasn't moved far enough to the right, the dragon will bump him and he'll die immediately. Otherwise, he must advance quickly and often the next portion of safe footing will not even be fully in place as he leaps. If he moves slowly, the dragon will bump him or his ledge into the abyss.


Keep hopping along to the right, until you come to a cluster of three ledges, at which point the dragon's life meter will appear on the screen.

You want to start at the lower left of those three ledges, positioned so that you hang slightly off the left side. That way, if a fireball hits you, it won't necessarily dump you into the pit. Fire left a few times, and be ready for the first fireball. Leap over it, fire a few more times, then leap to the next block to the right and face left again. Fire a few more shots, and be ready to jump yet again, this time to the top left block in the formation. 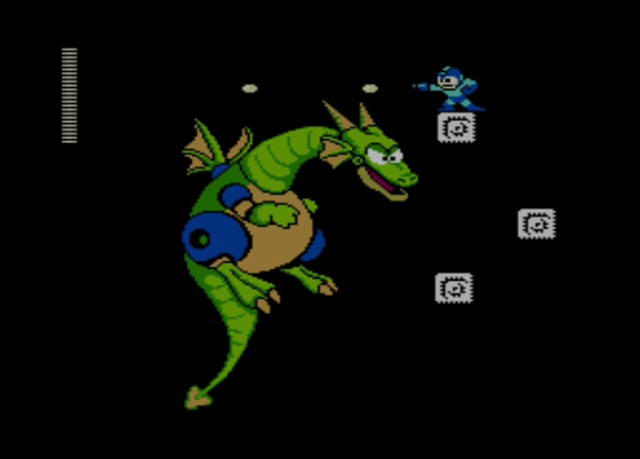 From there, just mash the fire button. As the dragon glides up to reach you on the high ground, you will likely get in enough shots to finish off its life meter. If you don't, be ready to jump another fireball barrage and keep shooting. You should win soon enough.