With your new special ability in hand, it's time next to face Quick Man's deviously constructed stage. For newer players, this is one of the hardest parts of the game, but it'll be no sweat if you keep a cool head.

From the start, use Item-3 to ride the wall to the left up to a ledge where a 1-up icon rests. With that collected, go ahead and drop down the pit at the center of the room. In the next screen, short red stations send out projectiles. You'll want to avoid the shots as you cross over the two small recesses and continue, though it's hard to do so.

Once you drop down the pit on the left side of that screen, you'll want to head to the pit on the right side of the screen to drop down that, as well. Before you do, pause to catch your breath. The next section is one of the two difficult portions of the stage. In the coming corridors, beams will quickly flash across the screen in set areas. Getting caught by one of those is instant death. You'll have to move with the speed of a fleeing gazelle to avoid them, and you'll likely need to memorize their positions. 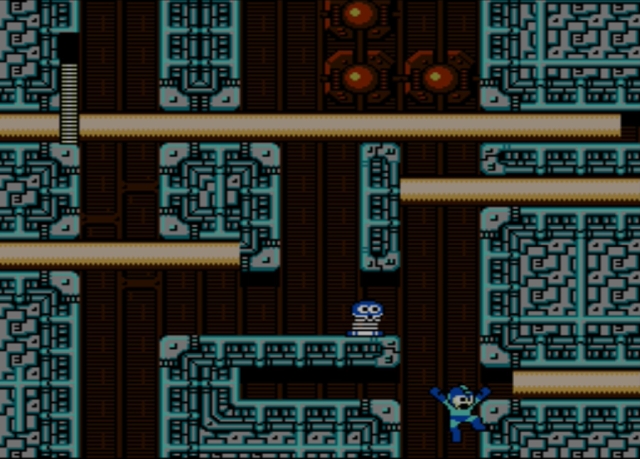 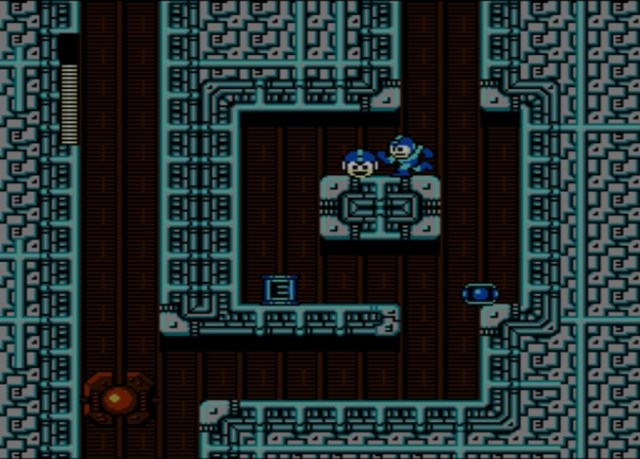 Fall into the first screen and hold left as you do so. Descend the steps quickly, and fall down the gap on the left side of the screen. Now as you continue falling through this screen, hold to the right. You'll fall down to the next screen, where you should hold right yet again. However, note the narrow ledge near the bottom. You will likely land on it briefly. When you do, walk right far enough so that you immediately fall off it, and drop down into the next screen. Now hold slightly left and you'll land on a ledge next to another 1-up icon, which you of course want to collect. Drop left from that ledge to collect the game's second energy tank. You'll likely want it for the boss encounter at the end of this stage.

Now that you have made it this far, drop down the pit to the left side of the screen, and you're past the first (and easiest) of the stage's two beam gauntlets. 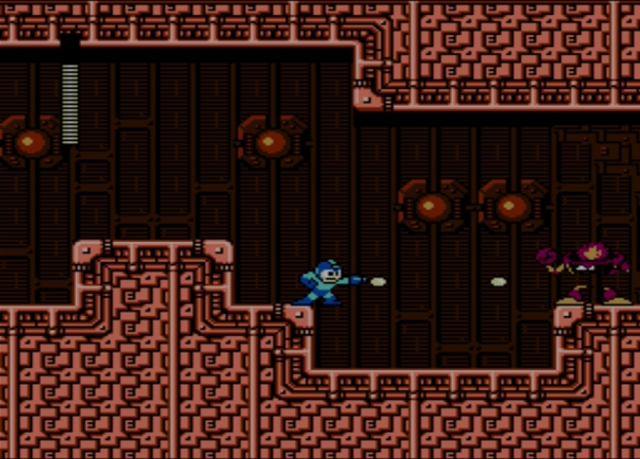 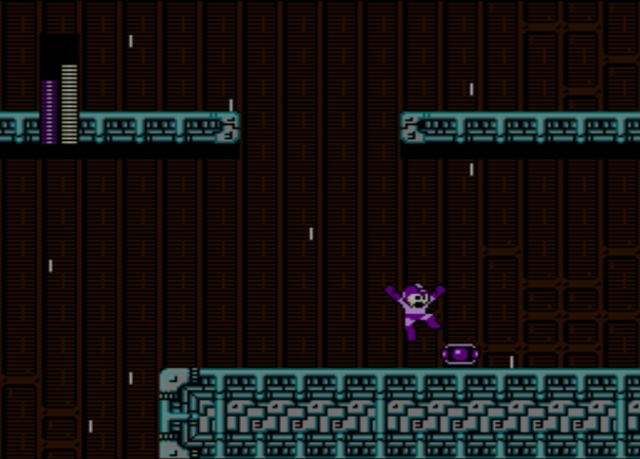 The area in which you now find yourself should be simple by comparison. As you move to the right, the screen will darken. There are basically two sets of block pyramids here, so just hop and climb to the right. You'll encounter no pits to worry about, just three flame-tossing enemies. Take them out with your arm cannon shots and proceed until the room lightens and you see a pit to your right. Time to take another breath; you're at the second of the stage's gauntlets.

At this point, I should mention that your Time-Stopper freezing move will pause the beams. However, it feels cheap to use it, and you'll really only want to use it if no other choice presents itself. This is because the special weapon also works great on the stage boss, and you'll have to refill the meter with difficult robot encounters at the bottom of the shaft if you use it during the descent.

When you're ready, drop down the first pit and hold left. You'll have to work your way around a small ledge there, to drop down the center of the screen before beams strike. As you fall down through the next screen, aim first at the center so you fall through a gap onto a ledge, then run quickly along the left so that you fall down to another ledge, then from there into open space. As you fall, return Mega Man to the center of the screen so he falls through another opening, then immediately hold left. You'll land on a wide ledge, so drop down off its left side, and now hold to the right as you fall down yet another screen. Descend the set of ledges leading to the right, then immediately head back left as you fall down another screen. Hold left so that Mega Man is positioned around a third of the way from the screen's left side. He'll fall past some pointless power-ups, which is just fine, into the next screen. Immediately, head right to drop down to another ledge, then left to drop down from there before a beam strikes. As you fall now, aim for just right of the screen's center, to fall through a final screen. When you land, quickly run left and drop down the pit on that screen's left side, to safety. You've survived the second gauntlet. 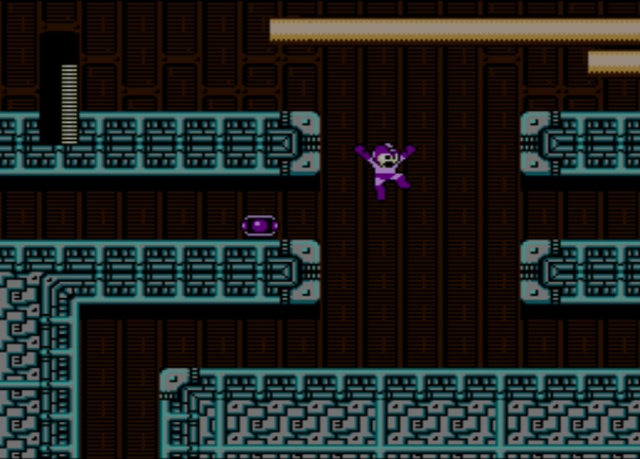 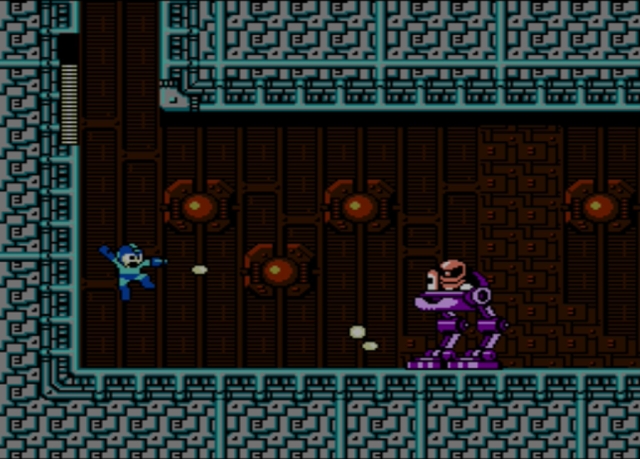 The stage is now almost over. You now should proceed to the right, past more of the mech robots familiar to you from the Flash Man stage. If you've tackled this stage later in the game, note that Air Man's special tornado attack will take out the mechs in one hit! As you likely don't have that ability, however, just use your normal arm cannon fire. Past two of these mech machines, you'll find the gate leading to the stage boss.


This fiend is quite difficult, but you can make things simpler by starting with Flash Man's special Time-Stopper attack. The best trick is to start toward the right after immediately falling, then let Quick Man jump toward you. He jump has a high arc that will carry him over your head. As he is descending and about to land, choose that moment to use the time freeze attack. This will drain around 1/2 of Quick Man's life, right from the start.

As an added bonus, you can safely cross the screen while the freeze drains the robot's life, then turn so that you're facing him from behind. Now, as soon as the Time-Stopper meter is completely drained, switch to your standard arm cannon and finish your attack as he crosses the screen to try and hit you. 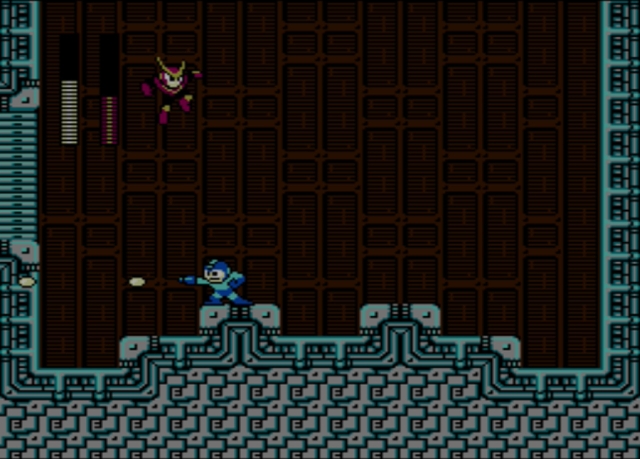 Quick Man darts quickly about the screen, true to his name. If he gets back to where you are on the right side of the screen, keep moving back and forth to make yourself a hard target. When he jumps into the air, he'll likely toss some boomerangs toward you diagonally, so be prepared to jump those. Also, be prepared to take some damage from physical contact with the devious robot master. It's nearly inevitable. However, you'll soon find yourself victorious if you keep up the rapid firing. Stay focused and you'll win the battle and Quick Man's boomerang attack.