At the end of a long, flame soaked sewer system, you'll find Heat Man. It's the level navigation that is the issue.

Start by heading to the right, as always. You'll need to hop from platform to platform, avoiding the lava flow between them. Monsters will be dropping from the ceiling as you progress, but you can easily take out each of those with shots from the Metal Blade. There also are more of the robots that look like miniature trash cans. These are produced by the numerous black holes that dot the wall behind this portion of the level. 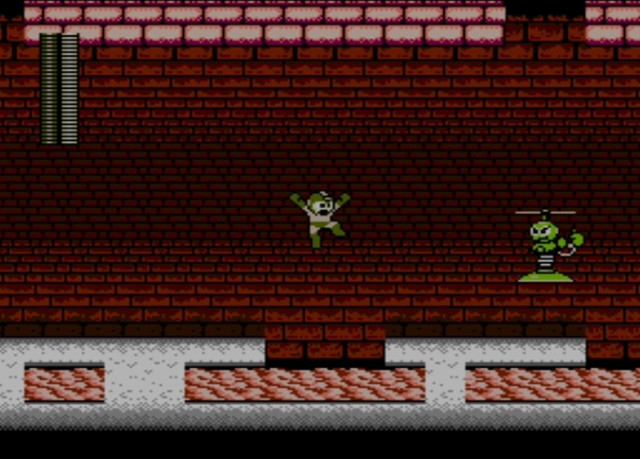 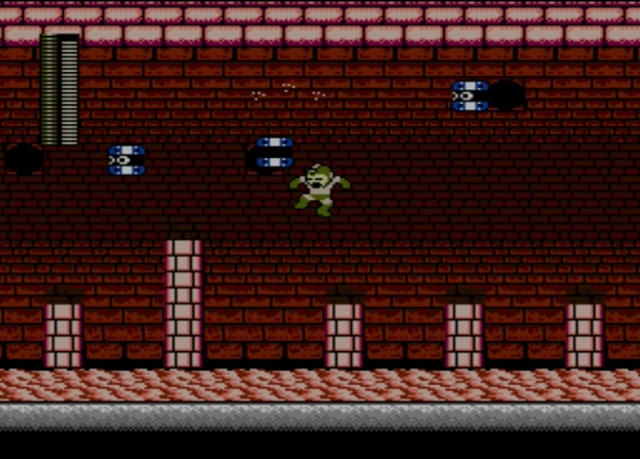 Work to the right and you'll soon come to a series of brick columns rising from the lava. The number of black holes and enemies here quite naturally increases, so you'll have to take out opponents, quickly hop to the next ledge, and repeat as necessary to get across the molten soup. Note that if you are bumped by an enemy and knocked into the lava, you may be able to jump out before your temporary invulnerability wears off. If not, consider yourself dead; touching the lava while not immune is fatal.

When the lava ends, the stone ledges do not. You'll have to cross several more that hang over a bottomless pit, before at last you can make a long leap to safer ground. There are more of the springy enemies here, so watch for them as you climb some ledges and proceed to the right, where a ladder will lead you down to the room below. 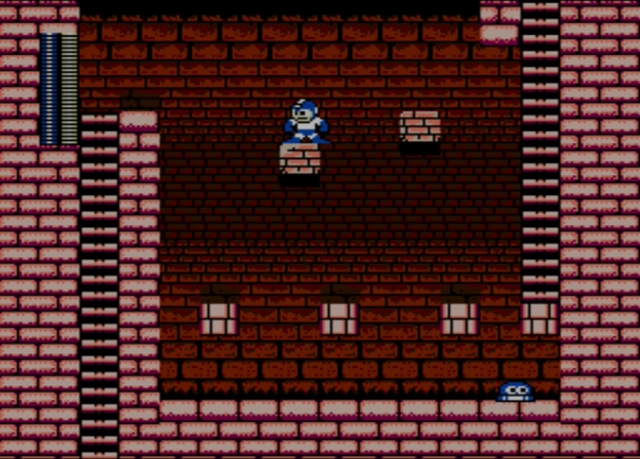 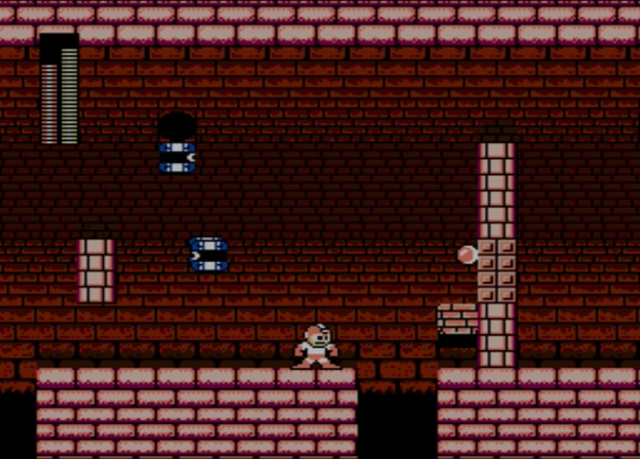 Here, the notorious appearing/disappearing blocks from the original Mega Man make their appearance. It's easy, though, and you'll move past this just fine if you are patient. Start by standing on the second brick from the wall (the one on which the ladder rests is the first). When a block appears to your upper left, hop onto it, then immediately hop straight up. If you time it right, a new brick will appear beneath you. You'll be standing on it, and from there you should wait a brief moment before jumping left, where the room's third brick will appear for a time. From there, you can jump over to another ledge, then descend that ladder.

The next room is another lengthy chamber with more of the bricks, as well as the garbage can enemies. Patience is again a necessity. Head slowly to the right. The columns here have destructible walls at their base, if you want to use Crash Bombs and go that route. A simpler method is to just use the disappearing/reappearing blocks to scale them. However, you'll have to risk several bottomless pits along the way. Time your jumps poorly and a block might suddenly occupy the same space as Mega Man, at which point you'll land back in the soup. Take your time to plan the jumps and this section is a piece of cake. 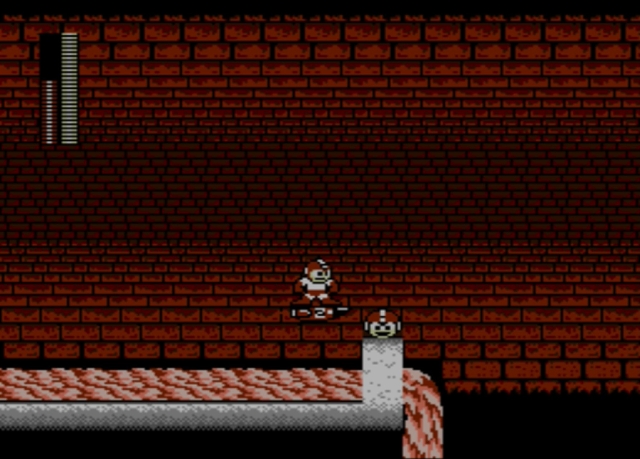 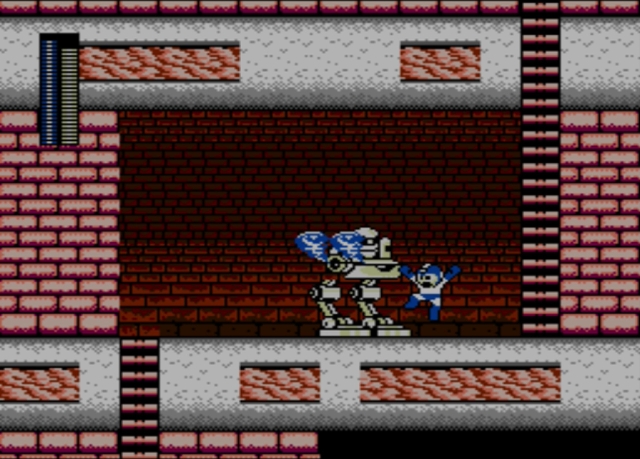 Once you get past the potentially dangerous columns, you're almost through the stage. Hop over some pits to the right, and continue along until you see a spring-like enemy racing toward you. Hop up to the ledge, then proceed along it while the springy fellow passes below. Or, if you prefer, you can also just take him out with the Quick Boomerang.

Now you have a choice. You can use disappearing/reappearing blocks in the area to make a long crossing over first solid ground, then lava. Or, you can drop down to the ground below and proceed to the right, to a short gray wall overlooking the lava. Once at that wall, you can then use Item-2 and safely fly over all the lava, over the bottomless pit beyond, and to safe ground. I recommend the latter, unless you just want to challenge yourself (and it is quite the challenge).

Once you're over the lava and the bottomless pit, you can press to the right and then descend a ladder, to a room with one of the mech robots. Take out his legs with an Air Tornado shot, then defeat the rider. Continue left, down the ladder, and you'll at last find yourself at the gate to the robot master. Whew!


Though he's a bit hot under the collar, Heat Man still shouldn't present much of a challenge if you counter with the Bubble Lead.

When he first appears, Heat Man will throw a set of flame columns that rise from the ground. It usually lands between you and he, so you'll have to leap it (and likely take damage) to have any chance at a clear shot. If Heat Man doesn't start blazing at this point, quickly hit him with the Bubble Lead. However, you should prepare to jump if he blazes, as he'll soon be flashing across the screen, impervious to your attacks. 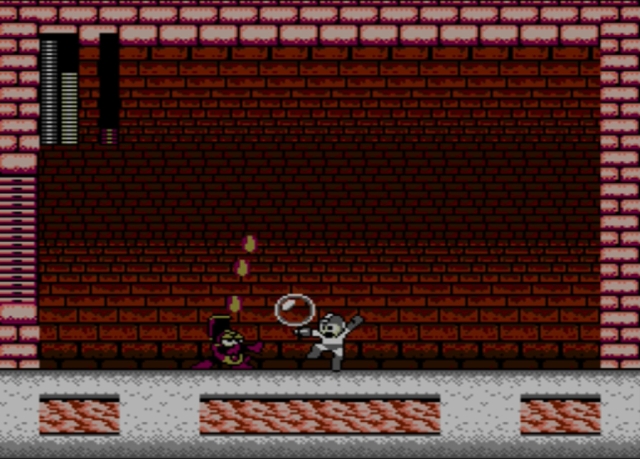 The battle ends when you've managed to break through his defenses and hit him three times with the Bubble Lead. Your rewards are the fire attack and Item-1 (a useful platform item you'll have to use throughout Dr. Wily's castle).