Massive trees and a series of caves that overlook a vast canopy of forest are the highlights in the stage Wood Man calls his home. You'll also want to look for leaping ostriches and giant wolves.

Before you encounter those beasts, though, you'll begin by heading right past a set of bats and rabid rabbits. The bats cannot be hurt while they are hanging like balls from the tree limbs, but the minute they swoop down to attack, they're fair game. Have the Metal Blades ready and toss them diagonally if appropriate, or get below a descending bat and send your shots to the sky. The rabbits are a threat of more concern, as they hop toward you and will toss the occasional carrot. You can leap the carrot, but a better tactic is to send a flurry of blades toward the rabbits before they get the chance to launch a proper attack. 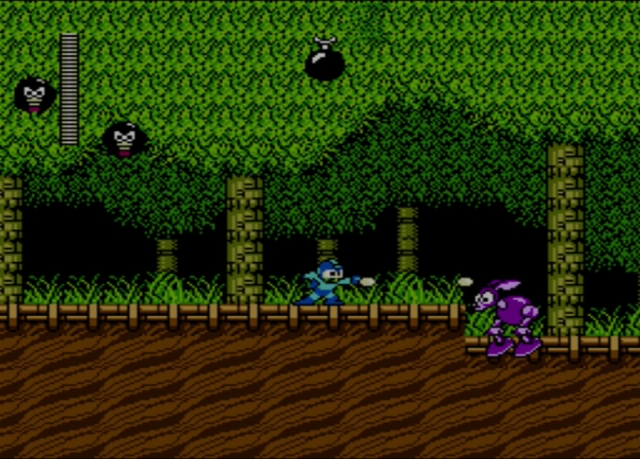 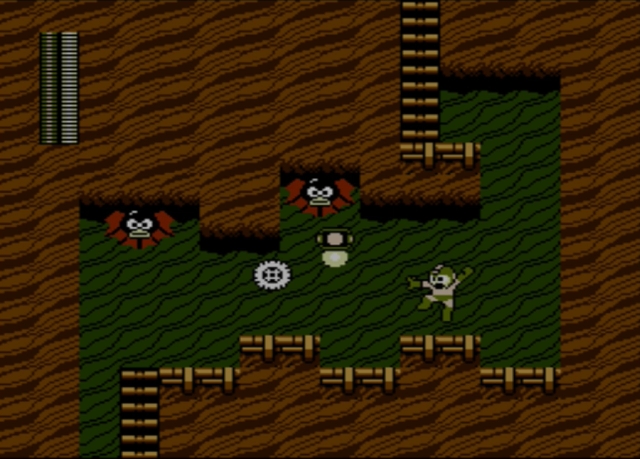 Past the bats and rabbits is a ladder. Descend it quickly (you can jump partway down to manage a swift drop, which is a time-saving tactic I employ). You're now in a room with more of the bats, so drop down to their level and take them out with more Metal Blades when they expose themselves. You can now drop down a pit to the left, into a room with the first of three giant wolves.

These guys are trickier than you might suppose, and the last thing you want to do is stand at the base of the ladder; the wolf on the right side of the screen will send an inverted arc of flame that will toast Mega Man. Instead, work right and drop down to a level even with the wolf (you may also hop and throw your blades downward at an angle). About five or six Metal Blades will spell the end of Mr. Wolf. 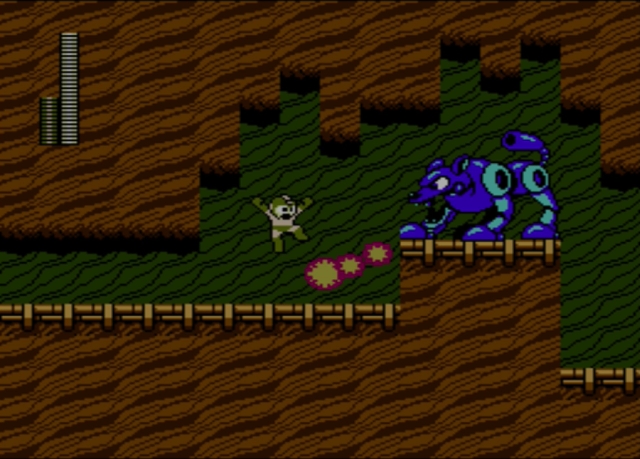 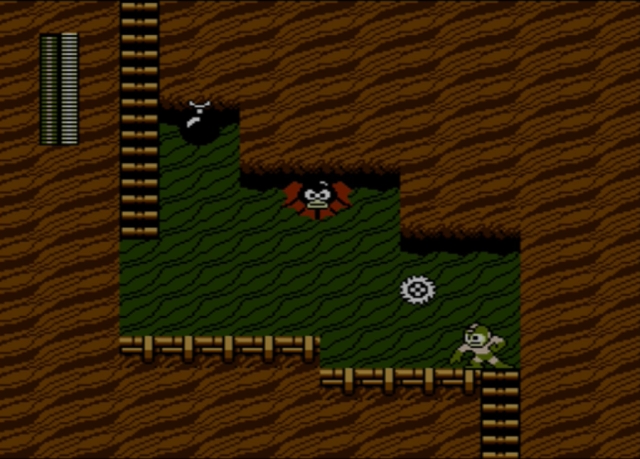 There are two more to follow, in the succeeding two rooms. You'll have less room to work with at this point, but should still be able to make the trek. Just remember that when the wolf spews his flame, you can jump from the left of the first of the fire, and land so that it has passed underneath you. Repeat this technique a few times, tossing a blade or two at each leap, and you'll do just fine.

Beyond the three wolves is a ladder leading up to a room with more bats, then another passage that leads to ledges overlooking the forest. As you head to the right, mechanical apes will latch themselves to the ledges just in front of you. Quickly throw Metal Blades down at them. About three hits should take out any apes that happen to appear. If you don't move quickly, the beasts will leap up to your level and cause you damage.

While this section may sound simple, you also need to watch for the birds overhead, which toss their eggs downward like bombs. If these strike a ledge, they burst and a flock of angry baby birds will fly toward Mega Man, so you want to hit bird and eggs with your blades in time to avert such a disaster. When you cross over this set of ledges, there's yet another ladder to descend. 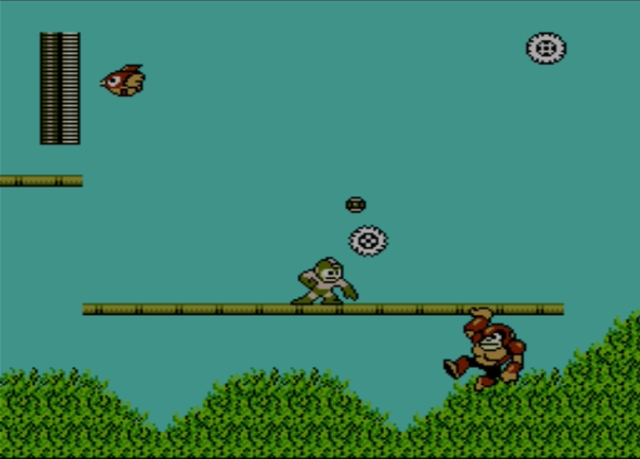 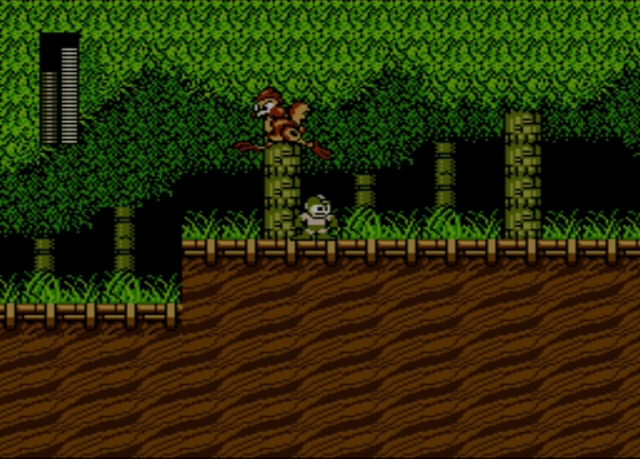 Climb down that and you're in the first of three rooms with the mechanical rabbits. As always, move forward and throw your blades downward at an angle to take care of them before they can counter with carrots. When you pass those three rooms, you're on the forest floor once more. This time, the threat comes from ostrich-shaped robots that prance toward you. I haven't experimented enough to find a weapon that harms them, but that's just fine. Move forward in short spurts, pausing to stand still when a bird approaches. If you stay in place and paused quickly enough, the foes will jump directly over your head when they come within range, and you won't take any damage at all. Continue past the birds and you'll reach the gate leading to the robot master of this area.


When a robot lives in a hollowed out stump, you know he's going to be cranky. Wood Man is one such robot. When you enter, he'll toss leaves up to the ceiling while another set encircles him and protects him from your firepower. He'll then toss that bunch at you and the leaves on the ceiling will descend as he hops toward you. It's hard to avoid the falling leaves, so instead focus your energies on Metal Blade shots. 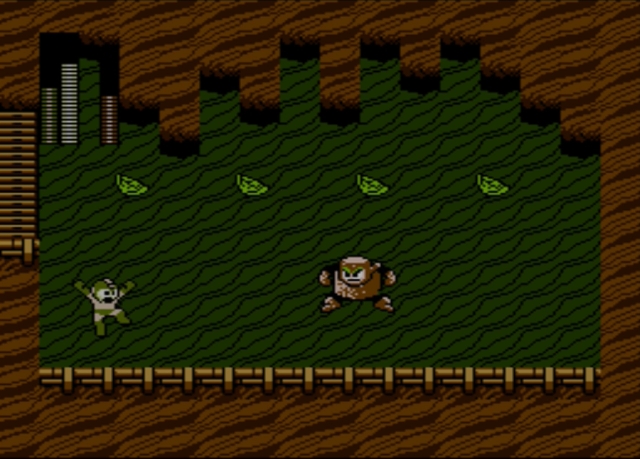 You can hit him with one barrage that will take down most of his life before he repeats the same pattern again. Just repeat what you did before until you are able to finish him off with a second set of Metal Blades. It's a fairly easy encounter.