Of all the stages in the game, this is the one that irritates me most. It seems most people agree, too. The first half is a set of trick ledges, while the second is a complicated ride on rails that leads to an enemy I used to always lose one life battling. 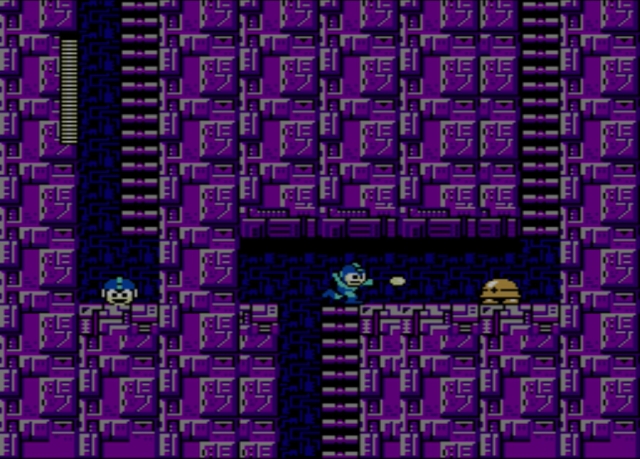 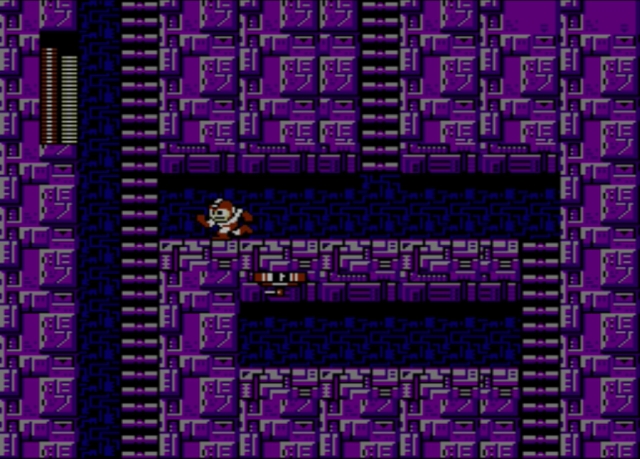 To begin, make sure your Crash Bomb meter is full. If not, grab the two refills nearby. When that's done, climb the ladder directly overhead. At the top, you'll fight a hardhat enemy, then climb yet another ladder. In this screen, some of the floors are not so solid as they seem. Climb up to about mid-level, then jump to the ladder that leads up to the next screen. Yet again, the footing is not solid. You'll pass right through some of the ledges if you try to walk on them. Either keep trying until you figure out which ledges are safe and which ones aren't (a fall isn't fatal, just irritating), or use Item-2 and fly over those blocks to the ladder that leads to the next screen. Item-1 can work as a nice alternative, also, as pictured in the screenshot.

When you reach this screen, walk across the (thankfully) solid footing at the lower level, and climb the ladder up to the bridge leading over the bed of spikes. There's false footing here, too. You can either run toward the ladder and jump when you're sure Mega Man can reach it (the false floor is just to the right of the ladder), or you can use Item-2 again and fly to safety. 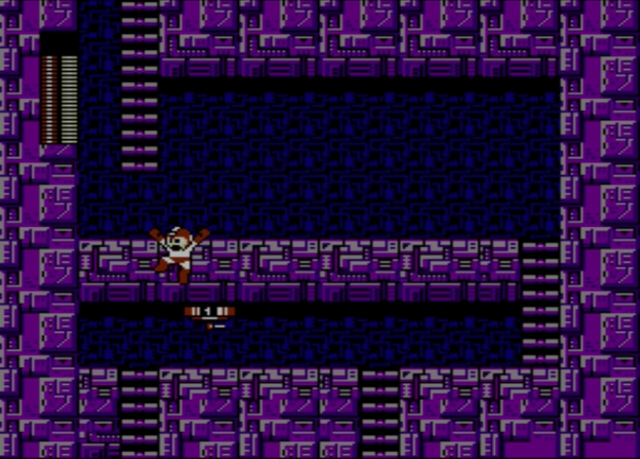 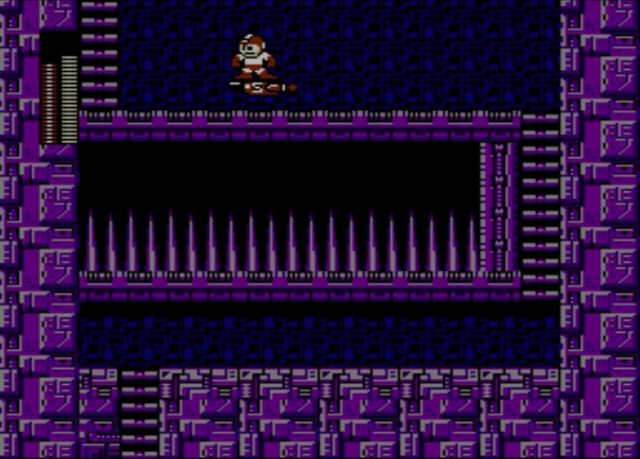 Climb that ladder into the next room and-you guessed it-you'll find even more false footing. Note that on this screen, you can cross to about the halfway point on the second ledge up, then use Item-1 to create a platform and ride it up through the false floor to the ledge above (to determine the location of the false floor, just hop until you find the ceiling you can pass through). By riding that ledge, you can reach more solid footing and grab the castle's last energy tank, if you need it. Otherwise, just climb the ladder on the left side of the screen, up to the next screen.

At last, you're done with the false footing, and at the level's midway checkpoint. 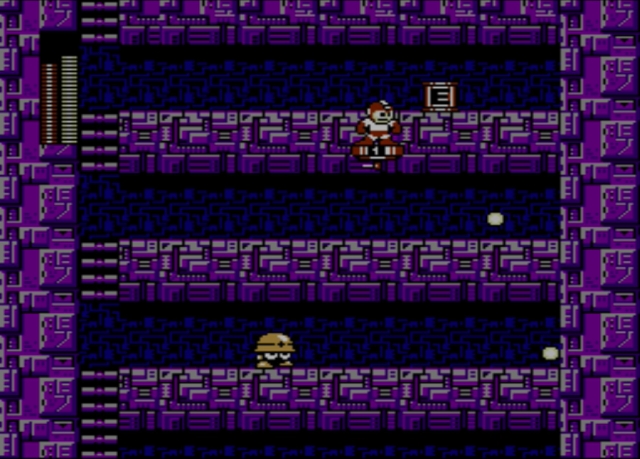 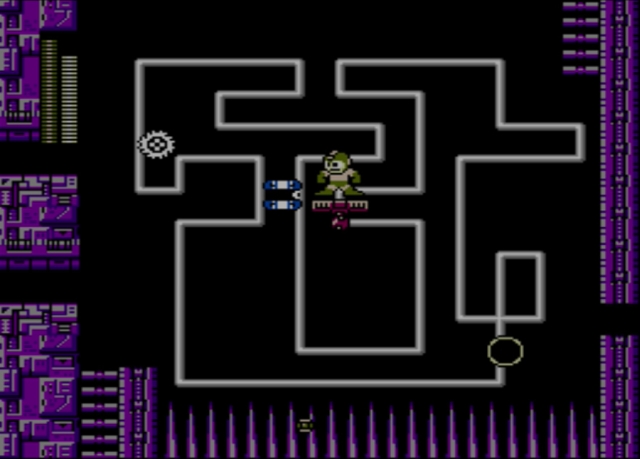 From here, walk to the right, where a ladder descends to a series of four rooms with lifts. You'll want to have the Metal Blades equipped, if you don't already. In the first room, wait for it to pass beneath the ladder and start its upward climb. You can now safely drop down. Ride the lift until you can jump and reach the ladder on the screen's lower left corner, then climb down it so that you're hanging over the pit of spikes in the next room.

Now you should wait until a straight drop will allow you to land on this ledge. Ride it toward the right side of the screen, but be prepared to jump up to the first outcropping. If you try and ride the platform all the way through, other ledges will knock you away. From your new vantage point, wait until the moving platform passes through the narrow opening, then hop back on it. Ride it for a short moment, then from there jump to the right. Drop off that ledge to the next ladder, and descend it into the next room.

This third lift room is one of the easier ones. Hang on the ladder until the lift is below, then drop down to ride it for a moment. When you near the short, block wall, you'll have to hop onto it briefly, then from there back to the moving platform as it takes you down to the point where you can drop through the opening. 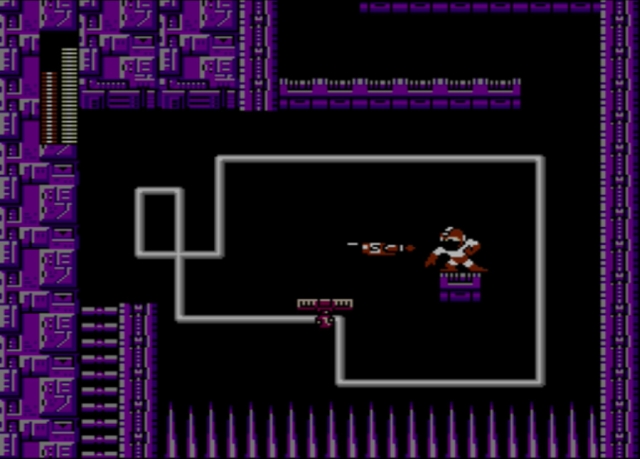 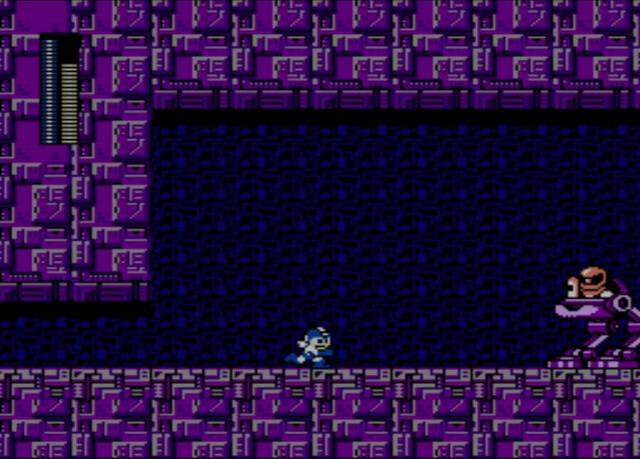 You're now on a ledge in the final room with moving platforms. Walk over to the edge of that ledge, and drop down to the moving platform as soon as it is in position. From there, hop immediately to the single block to the left, over the spikes. Now you have two options. The first is to wait until the platform moves around so its positioned about halfway between you and the ladder, then jump to the platform and from there to the ladder. Otherwise, you can use Item-2.

When you reach the safety of the ladder, switch to the Air Tornado and drop to the room below. You're now in a long passage with three shielded robots, two of which are riding robots. Take them out one at a time, as per normal, and you'll finally come to the gate that leads to the stage's guardian.


The room in which you find yourself is filled with cannons mounted on the wall. The only thing that will harm them is your Crash Bomb. Unfortunately, most of the cannons are also blocked by walls. These walls can be destroyed by Crash Bomb shots, but there just isn't enough energy in your tank to do both in one round, even if your meter starts out full.

You have two options here. For years, I would follow the first of the two options. However, you should learn from my stupidity and follow the second. Here are both options, outlined in their full glory: 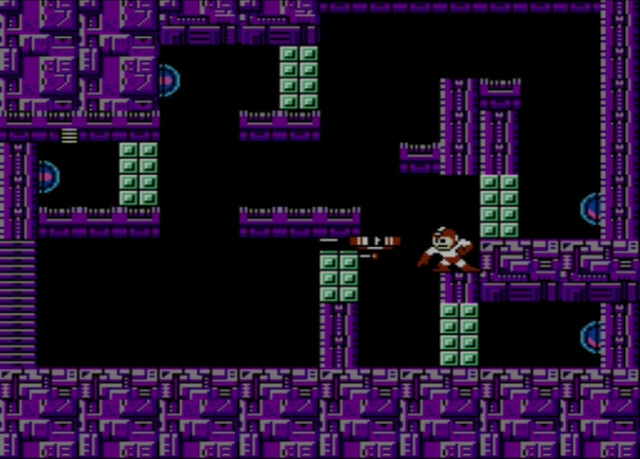 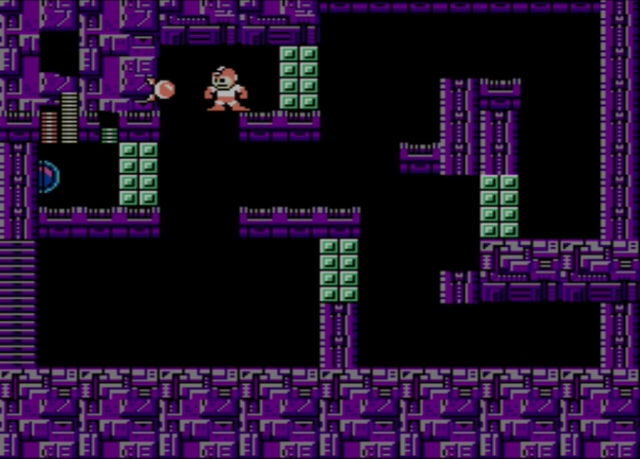 1) The first time you reach the bosses, take out each of the walls, then let the cannons kill you. When you reappear earlier in the stage, backtrack to fill up your special weapon energy again, then re-attempt the cannons. This time, you'll have plenty of firepower to take them all out (the walls won't have reappeared).

2) Use Item-1 (and in a narrower space, Item-3) to ride up over the walls (while avoiding cannon shots) and take out only the cannons with your shots. This will save you the time of attempting the boss with two lives. It's particularly useful if you arrive at the cannons, only to find that you're down to your last life. Who wants to go back and refill your special weapon meter, anyway?

Like I said, the second option is superior to the one I followed for years. Use the first option only if you have difficulty with the second and are patient. Also, you can sometimes avoid damage from the cannon fire if you rapidly pause and unpause the game just as they are firing. You will blink and the shots will go through you. It's a tough fight, in any case, so don't be afraid to use an energy tank if you must.