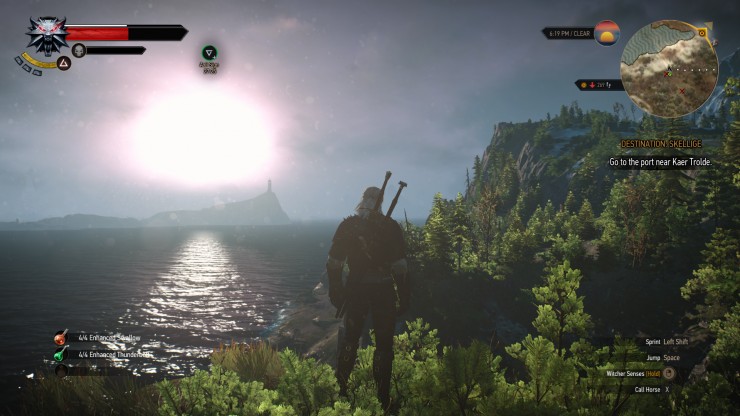 So why don't I have a review to show for it? After a hundred hours, could it be that I still don't have a solid grasp on whether or not I'd recommend the game? Certainly not. Most of my time with The Witcher 3 has been spent exploring the world and engaging in side quests, and even after about four straight weeks of this, I'm still actively looking for reasons to prolong the experience. After a hundred hours of game time, I still don't want it to end. That's remarkable. That's unheard of, especially given my lukewarm reaction to the first two games. Obviously, The Witcher 3 is amazing. Obviously, it gets my highest possible recommendation, and I don't need to see it through to the end to say that with confidence.

But what's particularly noteworthy about all of this is that even after a hundred hours, I've still got an awful lot of game to see. The Witcher 3's world is split primarily into two regions, Velen and Skellige. You go to Velen first. It's your typical fantasy woodland area, except that I can't recall ever such a traditional setting rendered in a video game on such a staggering scale and with such a breathtaking eye for organic details. I spent about 80 hours there before moving on to Skellige, a set of islands with harsher weather and more mountainous terrain. Most of my time there has been spent Wind Waker-ing between land masses, and I haven't even touched the story quests yet. Assuming that The Witcher 3's story is evenly split between its two major areas, this means that even after all of this time, I'm only halfway through the campaign.

I will, of course, be saving my most in-depth critique of this game for my eventual review (assuming I finish this before I die, which feels like a tall order at this moment), but let's just say that for all of The Witcher 3's issues, and it has many, it is now the new benchmark for open-world RPGs. And not just because it's big, but because everything that inhabits this world is genuinely interesting. Minor roles are well-written. Exploration yields rewards beyond flat experience points. Everything here has purpose, history, and context within the Witcher universe, a place that I've never felt truly absorbed in until now.

Mechanically, there's still a lot that CD Projekt RED needs to iron out, but there's a reason we're always more forgiving of that in rich, ambitious titles like this and Skyrim: because there really is a bigger picture. And where the first two Witcher games felt walled-in, the third entry is CD Projekt RED bringing their vision to life. I can't wait to tell you why.