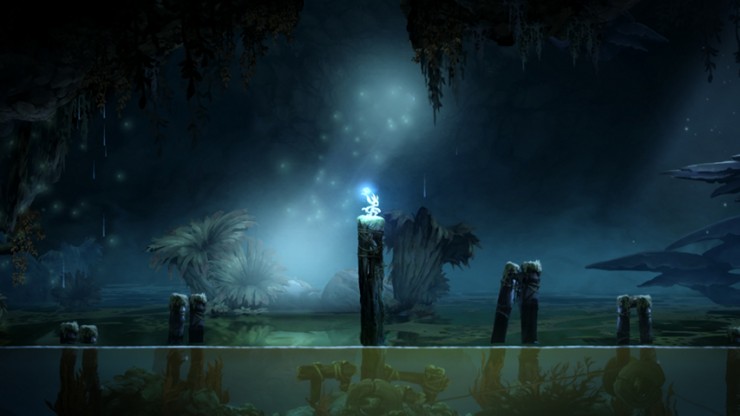 Apotheon (PS4) - This was free for PlayStation Plus users, and honestly, I'm glad I didn't pay for it. It's a 2D action-platformer based on Greek mythology, employing the art style used during that period. A nice visual hook, but the combat's really lousy, a combination of loosey-goosey controls and enemy AI that seems more interested in running up and giving you a hug than presenting a challenge. So bland that even the initially intriguing art style grates after a short session. Didn't get very far and probably won't be back.

Cubot (PC) - Not much to say here. Picked it up for a few bucks on Steam and enjoy it as simple puzzler in which you roll cubes simultaneous around 3D grids. Challenging but unintimidating game that's nice to play while you're watching a movie or show with one eye.

Disorder (PC) - A short, concise 2D platformer that attempts to convey depression and anxiety through interactive means, depicting a downward mental spiral through increasingly intense visual cues and a sharply inclining difficulty curve. Let down by some melodramatic writing and some overly finnicky controls (which hurt some of the late-game stuff), but it's okay. Solid experiment.

Drizzlepath (PC) - Bought this for a few bucks basically because it looked pretty and I'm not past the point of gawking at what my new video card can do. Unfortunately, it's obviously a low-budget production and horribly optimized, so it runs poorly. Beyond that, it's a self-described "walking simulator" with a charismatic narrator and some delightful music. Not really my thing, but would've been a lovely technical showcase if it ran better.

Game of Thrones: A Telltale Games Series (PS4) - The first two episodes are out. The first is fantastic. It hits fast and hard, then hits hard again right at the conclusion. Game of Thrones is a franchise full of moral ambiguity, so it's a perfect fit for Telltale, and as a side-story, it's smoothly integrated enough (with some familiar characters) that I have no trouble believing that this fits into the show's mythology. Second episode was kinda uneventful, sadly, but I have high hopes for this run altogether.

Grow Home (PC) - Loved it. Really delightful platformer with an astounding sense of scale and some nifty experiments with physics, procedural animation and character manipulation. It's astounding that this came from Ubisoft because this feels like a charming indie release to the bone. My full review is over at GameCritics.

Hand of Fate (PC) - Really unique little cross of dungeon-crawling and text adventure, framed as a tabletop/card game livened up with diversions into Batman Arkham-style combat. Looks like the sort of game you need to spend ages, but it's actually very easy to get into. The dealer is one of my favorite characters in quite a while; witty without being obnoxious or tone deaf, and seemingly never runs out of things to say. I recommend this one.

#IDARB (Xbox One) - Basically a sports game (most closely resembling soccer) that plays like a 2D platformer. It's kinda fun, but it's absolutely plastered with social network overload; the concept started on Twitter where it was developed into a full-fledged title, as evidenced by the hashtag title. I'd be able to deal with that, but the game's sense of humor is awful and basically just amounts to an announcer screaming famous movie quotes out of context. That alone kinda makes me not want to play, honestly.

La-Mulana EX (Vita) Remastering of a game I've never heard of. Not overwhelmingly difficult, necessarily, but very unwelcoming, set in a world that basically plays like one massive Zelda dungeon. The jump controls take quite a bit of skill to use properly and it's difficult to keep your bearings in the game's world, but there's very little downtime and the satisfaction in figuring out the environmental puzzles in constant. Cool, but not for everyone.

The Old Tree (PC) - Neat little fifteen-minute point-and-click with some intriguing depictions of alien worlds and decent puzzles. It's free on Steam and it won't take much of your time, so eh, check it out.

Ori and the Blind Forest (PC) - My favorite game of the year so far without question. Unfathomably beautiful but also relatively traditional in its approach to Metroidvania structure. That's fine by me. Some really inventive platforming mechanics leading to equally inventive platforming sequences, and it's framed with a story that's emotionally ravaging but doesn't get in your way. If this sort of game is your thing, this is the best example of it in quite some time.

Tales from the Borderlands (PS4) - It's really nice to see Telltale do something lighthearted for once. Only one episode is out, but I think I actually enjoyed it even more than Game of Thrones; it's fast-paced and the characters are wild and memorable. Will definitely be sticking with this one.