I know what you're thinking: "Just what we needed, another Xbox Live word game..." Well, cheer up, because Quarrel isn't your average Scrabble clone. It's a charming combination of word unscrambling and turn-based strategy warfare. Wait, wha-? No, you didnt read that wrong; in Quarrel your goal is to control all of the territories on the game board using the unstoppable force of your Word IQ. 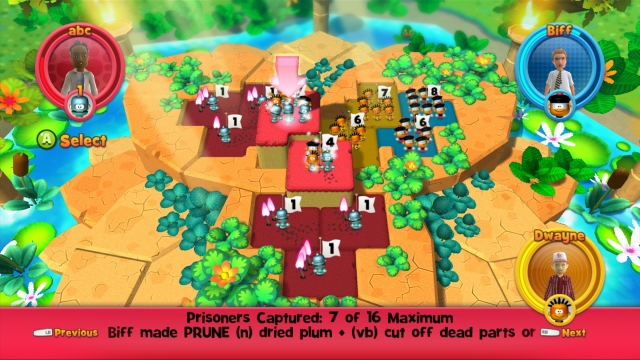 I'll grant you that it sounds like a strange combination, but the game's charming art style somehow makes it all feel hunky-dory. Your armies are represented by cutesy 2D ninjas, robots, Scotsmen, and other fun characters, and combat consists of letters being hurled across enemy lines. The onslaught of charm is fiercest when you hear the little combatants speaking their own brand of Simlish as they shout out your mighty, high-point words! Or when, as in my case, they mutter puny, low-point words under their breath. 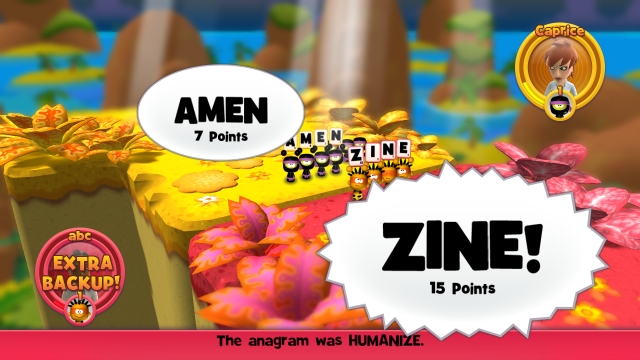 Don't worry; my wordsmithing skills improved over time and so will yours. The game's tutorial will start you on your path to word domination (see what I did there?). At first the play mechanics can seem a bit overwhelming, but I found the concepts easy to master in the span of a few minutes. In fact, I found the game to be a little too easy to master for my tastes.

I know it's an adorable little Xbox Live Arcade title, but the shallow gameplay made the competition rather lackluster. The introduction of a few different army types and more interesting battlefields could have helped, but ultimately the blame lies in the underdeveloped word combat system. It's a no-frills, constant repeat of the same verse: "Use these letters and make a better word than the other dude." It's typically a fun challenge, but all too often I ended up tying with my opponents word score, sometimes even by making the same word as him. In such ties, the game determines the winner by awarding victory to whoever made his word the fastest. Thus, the essence of combat is the process of fumbling with the joystick and the A button to pull your word together faster than the other guy. 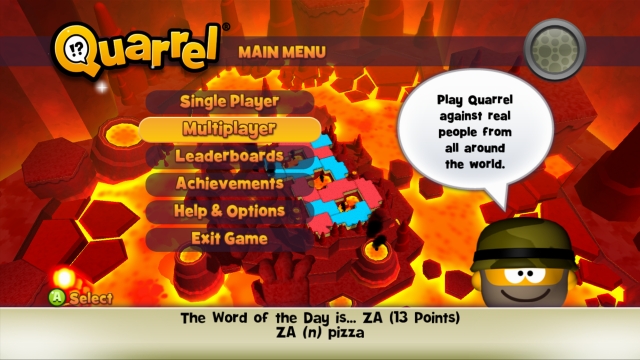 Don't get me wrong; this frantic word-building has a certain appeal, but when you're playing against someone on the other side of the world, it's hard to enjoy the chaos. I tired of it fairly quickly. On the flip side, playing with friends can be a blast. The opportunity to ridicule your closest friends due to their inability to form high-point words is always appreciated, and relieves some of the stress of this game of speed-wording. However, it must be said that the lack of any kind of local multiplayer really hurts the experience. It would be difficult to prevent cheating with all players sharing the same screen, but I could see Quarrel being a great party game if the option were available. When you lose a quarrel, drink! Then again, that might start an unfortunate downward spiral...

If the intensity of Quarrel's online multiplayer isn't your cup of tea, the game's offline modes present a more relaxed environment in which to hone your skills. The AI opponents are typically slower than human competition, which gives you a bit more time to think, but they can still present a challenge at the higher levels. And for you completionists out there, winning a match nets you a bronze, silver or gold medal, which adds a bit of a meta-game on top of the overall goal of taking out your opponents. Unfortunately, there are no significant differences between game modes in Quarrel. The only real changes from match to match are the opponents and the layout of the game board. Slightly different overall objectives dont really change how you play the game. 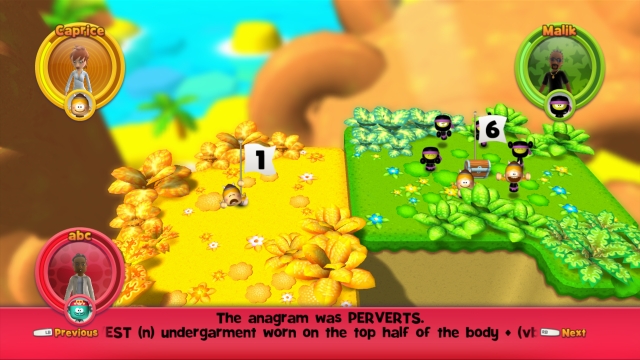 Quarrel is a fun game that's worth checking out, but it suffers from a few missed opportunities. Even so, the offline modes are a great way to get acquainted with the game, and the online multiplayer lets you take it to the next level if you don't mind the frantic pace. Here's hoping Denki recognizes the missed opportunities and releases a sequel with a bit deeper strategy and combat.
3.5/5

If you enjoyed this Quarrel review, you're encouraged to discuss it with the author and with other members of the site's community. If you don't already have an HonestGamers account, you can sign up for one in a snap. Thank you for reading!

© 1998-2021 HonestGamers
None of the material contained within this site may be reproduced in any conceivable fashion without permission from the author(s) of said material. This site is not sponsored or endorsed by Nintendo, Sega, Sony, Microsoft, or any other such party. Quarrel is a registered trademark of its copyright holder. This site makes no claim to Quarrel, its characters, screenshots, artwork, music, or any intellectual property contained within. Opinions expressed on this site do not necessarily represent the opinion of site staff or sponsors. Staff and freelance reviews are typically written based on time spent with a retail review copy or review key for the game that is provided by its publisher.