At first glance, it's easy to write Trine 2 off as just another bland adventure rife with some of the most unapologetically banal character tropes ever: a thief, a wizard, and a knight teaming up to rescue yet another princess who's somehow gotten herself into yet another predicament. And should you choose not to look past the premise and rely solely on judging this book by its cover (on which thief Zoya closely resembles Altair of Assassin's Creed fame), you'll be purposefully tossing away what could very well be one of the most rewarding platforming experiences to have been had in 2011 this side of Rayman: Origins.

Finnish developer Frozenbyte ensures from the first few moments of Trine 2 you're hooked by a cornucopia of vivid imagery that looks as though it were ripped straight from a glossy-paged storybook. Some of the most eye-catching decor I've had the pleasure of taking in during the whole of 2011 greets you as you're introduced to the quest you're about to undertake. Each member of your motley crew has their own specialty, and this hasn't really been altered from the original adventure. Despite this, even newcomers should be able to find their place fairly quickly. 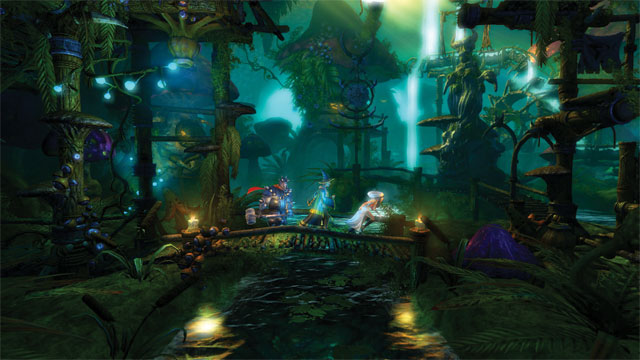 The Warrior is tasked with typical "soldier" duties: hacking and slashing to beat the band. He can shield himself from onslaughts of physical attacks and break through pesky barriers dotting the landscape. The Wizard relies on spellcasting, whipping up objects that can be used in turn to solve one of the multitude of puzzles you'll be faced with. The Thief is assigned a role that's split down the middle between stealth and offensive talents, given arrows and a grappling hook. Think Garrett (of Thief fame) meeting Batman. It's up to you to employ the unique talents of the heroes to advance through several challenging stages, including many that seem to have been ramped up in difficulty considerably from the previous installment. In addition, each class has been outfitted with a marginal amount of new abilities -- an added bonus for fans of Trine.

It's not uncommon to be asked to find a solution to puzzles involving water or other environmental physics, which can be quite difficult until you learn to effectively switch between the powerful warriors at your disposal. If you've ever played The Lost Vikings, a Genesis puzzler from yesteryear, you should have a general idea of how cumbersome switching can be when all you want to do is advance to the next area. You'll rack your brain over whose abilities are best-suited to the task at hand, and will often fail. But it's this trial-and-error essence that kept me coming back despite my low store of patience for seemingly unsolveable puzzles. Trine 2 has a way with imagery and atmosphere, weaving annoyances into visual poetry that I couldn't help but eat up, despite recruiting friends to aid in completing a handful of levels. My bad! 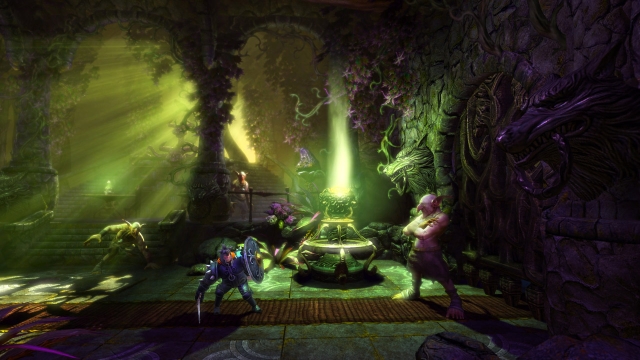 Single player and multiplayer modes allow for one adventurer to beat the odds solo or rely on friends for puzzle-solving fun. This time around, a brilliantly orchestrated co-op mode rounds out the feature set. Rather than relying on your own wits and reflexes in single-player mode, co-op allows for each player to control their designated team member at the same time. Action becomes much more fluid and frenetic with more players, and though it's no longer a solo affair, it's still hugely satisfying. In a world where cooperative play seems to be diminishing from current releases, this was one of the aspects I appreciated most.

Trine 2 practically explodes with a neon spectrum of hues, and it's evident in each fantastically designed hand-drawn scene that plenty of attention has been heaped upon making the environments stand out from the crowd. Sharp lines are delivered by competent voice actors, and are certainly good for a chuckle or two here and there. You'd be hard-pressed to find a better-looking platformer, and it's a breath of fresh air to see a fresh coat of paint on a stagnant genre.

This multi-specialty adventure is surprisingly deep and challenging for its bargain price, and if you've got the friends and the time, it's well worth the admission. If you're looking for more twists on familiar tropes, Trine 2 is your the best candidate. Pick it up and save the princess. Just don't get too caught up in sightseeing on your way to the finish line.

If you enjoyed this Trine 2 review, you're encouraged to discuss it with the author and with other members of the site's community. If you don't already have an HonestGamers account, you can sign up for one in a snap. Thank you for reading!

© 1998-2021 HonestGamers
None of the material contained within this site may be reproduced in any conceivable fashion without permission from the author(s) of said material. This site is not sponsored or endorsed by Nintendo, Sega, Sony, Microsoft, or any other such party. Trine 2 is a registered trademark of its copyright holder. This site makes no claim to Trine 2, its characters, screenshots, artwork, music, or any intellectual property contained within. Opinions expressed on this site do not necessarily represent the opinion of site staff or sponsors. Staff and freelance reviews are typically written based on time spent with a retail review copy or review key for the game that is provided by its publisher.