Remember when Assassin's Creed II came out and you thrilled to the prospect of all the cool places the series would go? From the Middle East during the Crusades to the grand opulence of Renaissance Italy, where would Ubisoft take you next? The Old West? Victorian London? Mesoamerica? Not in your wildest imagination did it ever occur to you they would do what they've done: sit in one place spinning their wheels until Assassin's Creed: Revelations happened.

Instead of moving the settings along, Ubisoft is doing the equivalent of camping, milking the series for things that were already good in the previous games without adding much of value. Assassin's Creed: Revelations would be fine if you'd only ever played the first Assassin's Creed. But if you've played II or Brotherhood, you're getting a lot more of the same in a slightly new place. Don't expect much from the change of setting. Byzantium could have been as dramatic a shift as Jerusalem to Venice. Instead, it feels and looks like a suburb of Rome with a couple of cool outdoor markets. 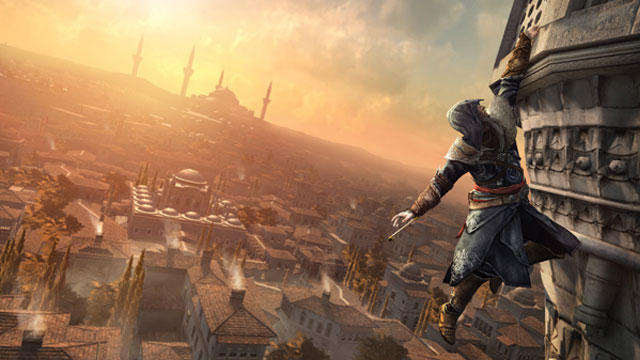 More to the point, Revelations plays almost exactly like the previous game, with story missions, faction missions, a city ready to be conquered neighborhood by neighborhood, and friendly assassins you'll level up by messing around on an annoying strategic screen. What is new is inconsequential. Grenade crafting might sound tedious. It is. Perhaps you figure getting grenades is worth a little tedium. It's not. It's entirely possible to cruise through hours of game at a time, completely forgetting you've even got grenades. And even if you force yourself to use them since you pay $50 for this game, it's entirely possible to get to the end of the game without once messing with the various traps, gas clouds, and flashbang distractions, which turn out to be as useless as they are silly. In fact, the city itself seems to take pains to remind you that you have grenades. You constantly find components on dead guards, and grenade crafting stations are as ubiquitous as ATMs in a modern city. Ubisoft stops just short of posting signs that say "Don't forget to toss your grenades today!" So many of Revelations new features are sadly unsupported by the actual game design.

The situation with training your assassins and sending them on missions suffers the same lack of incentive. Additions to the assassin management subgame include taking control of other cities, requiring specific weapons for certain missions, and letting you feel a more personal connection to specific recruits by playing alongside them. But the payoff for these features is practically non-existent. There is no more incentive to mess around with the strategic assassin management than there is to craft funky grenades. In fact, the game's economy is largely useless. Money doesn't matter. Your important equipment is doled out over time. If the art of good game design means forcing the player to make interesting choices, the art of Assassin's Creed: Revelations' design is letting the player mess around with pointless features.

Combat in Assassin's Creed is still solid when it's one guy fighting a handful of enemies polite enough to hang back and wait their turns. But when Ubisoft tries larger encounters, which they do frequently in Revelations, Assassin's Creed combat looks suspiciously like Dynasty Warriors. That's not something to aspire to. When a riot breaks out, it looks unintentionally hilarious, with characters shuffling and bumping uncertainly. It looks more like a high school dance. But even when the fighting is on a smaller scale, it's hard to not compare this admittedly decent combat to the clear and intuitive elegance of Batman: Arkham City. Assassin's Creed's combat was great back in 2007. Why hasn't it gotten greater?

The multiplayer is still excellent, rebooted here for new maps, modes, and character models. None of these change or advance the basic gameplay. There isn't a single thing here that shouldn't be DLC for Brotherhood. It's a real shame that Ubisoft is splitting the player base for what it already an underpopulated online community. If there's one way to kill one of the boldest things about Assassin's Creed, this is it. 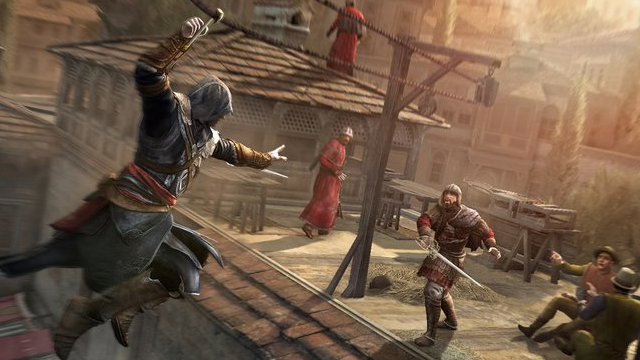 Plot and character have never been a strong point in the series, which has gotten increasingly silly and unfocused. Revelations has far too much nonsense with its modern day hero, Desmond, trapped on his Inception-esque Animus Isle. You unlock astonishingly awful Tron sequences in which he burbles on with some sort of exposition. If you've ever wanted to hear Desmond talk about himself at length, this is the game for you. Meanwhile, back in the real world, Ezio takes up with a hot librarian chick to investigate some Byzantine CD-ROMs that will lead to the glowing baseball from the first game. I hope that's not a spoiler. Along the way, he has to occasionally play a wretched tower defense game, because that's a hot genre these days. Sometimes he also has to play an awful flashback mission, since the game uses assets that suggest a Middle East setting, and hey, the first game was in the Middle East, so why not roll out Altair again?

It all comes down to Ubisoft doubling down on the nonsense instead of making a real sequel. The real revelation here is that the various studios pressed into service for this quick-and-dirty follow-up seem oblivious to what makes the Assassin's Creed games good. It's certainly not hooey about magic apples and ancient CD-ROMs, finicky grenade crafting, awkward assassin team management, flashback missions to three games ago, stealth sequences with hard fail states, excruciatingly bad tower defense sequences, or Inception wanna-be hubs. Assassin's Creed is a game about climbing around a crowded ancient city as a playground. It's about geography, architecture, history, and stabbing. It is about what you'll get if you just replay Brotherhood instead of getting suckered into this exercise in misguided byzantine Madden-ization.

© 1998 - 2022 HonestGamers
None of the material contained within this site may be reproduced in any conceivable fashion without permission from the author(s) of said material. This site is not sponsored or endorsed by Nintendo, Sega, Sony, Microsoft, or any other such party. Assassin's Creed: Revelations is a registered trademark of its copyright holder. This site makes no claim to Assassin's Creed: Revelations, its characters, screenshots, artwork, music, or any intellectual property contained within. Opinions expressed on this site do not necessarily represent the opinion of site staff or sponsors. Staff and freelance reviews are typically written based on time spent with a retail review copy or review key for the game that is provided by its publisher.