A lot of what makes Saints Row: The Third great -- and can we just call it Saints Row 3 from here on out? -- is the same stuff that made Saints Row 2 great. But a couple of important differences go beyond the upgraded graphics engine and the new gameplay features. The first is that it finally gets how to do characters. These aren't "real" characters, of course. They're mostly goofs, presented with a good-natured likability that doesn't take itself too seriously, as was sometimes the case in Saints Row 2. But it works. I defy you to come out of Saints Row 3 without an opinion about Kenzie, Oleg, Viola and Kiki, the main Decker, Zimo, Josh Birk, the mayor, and Kia. Especially Kenzie. Oh, Volition, you really get us videogamer nerds, don't you? 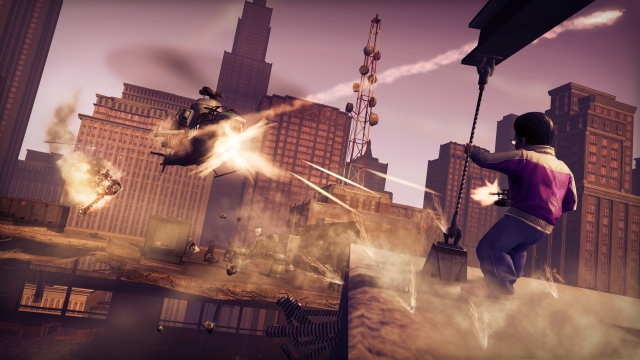 Volition also deserves credit for what they do with series regulars Johnny Gat and Shaundi, particularly for seeing it through. You think Shaundi is annoying and bitchy? It's intentional. Volition uses it as an opportunity. The only problem, if you can even call it that, is that the main characters are so good they upstage the villain. It's the inverse of what usually happens in superhero movies. But just like Shaundi being so grating, I'm convinced it's intentional. The choice you make during the final mission wouldn't work if the villain were truly villainous and not just a loud-mouthed jerk.

The second important difference from the previous games is that Saints Row 3 has flat-out fantastic missions, all situated perfectly in the open world that is Steelport. I'd just as soon not give examples, because there are some wonderful surprises here. You're in for such a treat, particularly if you haven't seen publisher THQ's promo videos. The city itself may not be very interesting, but the things that happen here sure are. Suffice to say you shouldn't get too attached to the skyline.

Furthermore, Saints Row 3 knows how to balance scripted set pieces and dynamic mayhem. Enjoy them at your leisure. Progress the story by using your cellphone to start whichever story mission you want to tackle next. If you want to make a beeline from the intro to the conclusion, have at it. But whenever you feel like it, you have a whole city for the taking. You conquer Steelport chunk by chunk, but each chunk has a different goal, indicated by icons that pop up as you explore. Maybe you have to pony up $1000 to buy a meth lab in order to take over this neighborhood. Or maybe it's $5000 to buy a hospital. Maybe you just have to kill the cluster of gang members loitering around. Most likely you have to do one of the game's many activities. Work through your favorite activities all at once. Sample different activities. Avoid the ones you don't like and when you're ready, recruit a friend to tackle them cooperatively. The map of Steelport isn't just a map of Steelport. It's a to-do list that exists alongside the story. 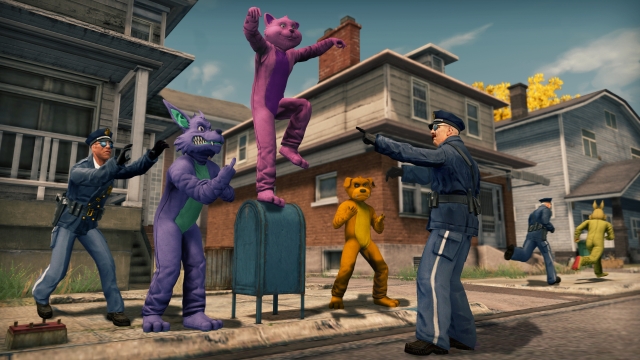 And this leads to one of greatest truths about Saints Row 3. It is immaculately paced because it loves you. Most games can be insensitive clods with occasional rough patches. You get stuck for a while, or it's slow to start, or you cruise through some filler, or certain design choices are clunky, or the characters are flat and you don't care about them, or you know exactly what's going to happen next and therefore when it happens you don't care. None of this happens in Saints Row 3, which is a textbook example of how to keep me into a game from beginning to open-ended end. I don't have to slog through a few early missions with a derringer and a puttering ATV. I don't hit a crazy difficulty level spike half way through. I don't fight a stupid boss battle at the end. Well, okay, maybe I do because Saints Row 3 knows exactly how to set it up. You're in good hands. Here is a game that starts you out doing the sorts of things you wouldn't normally do until the end of other games. And yet, it never stops delivering surprises, twists, and "I gotta get me one of those!" moments. Which is followed by one of those being immediately given to you. Saints Row 3 doesn't go to 11, because it's there from the beginning.

Despite its generosity, Saints Row 3 has an economy. Actually, the word economy is too dry. That sounds like something Ben Bernanke would say. What Saints Row 3 has is more like the largess of a capable but drunk dungeon master who wants to impress you. You are a fire hose through which money flows. The game constantly shows you stuff you want to buy, and it constantly throws money at you to buy it. Weapon mods, ammo, grenades, character abilities, customized vehicles, property, stronghold improvements, gang upgrades.

But I'm tempted to use the word economy because it does a great job balancing the amount of money you have and the amount of stuff you want to buy. And by "balancing", I mean there's never enough money, so there's always incentive to keep playing. I've played for just over thirty hours as of this writing, and some of those hours were just killing time waiting for money to roll in from the cola factories, furniture stores, and crackhouses I own. Yet I never had the sense that I had more money than I knew what to do with. On a few occasions, I would find I had been so caught up playing that, oh look, I have $200,000! Which melts away once I buy the airport, upgrade this shotgun I just found, and unlock extra shotgun ammo capacity. Wait, where did my $200,000 go? Not that I care, because I'm about to go try out this cool shotgun. Way to make money meaningful, Volition. 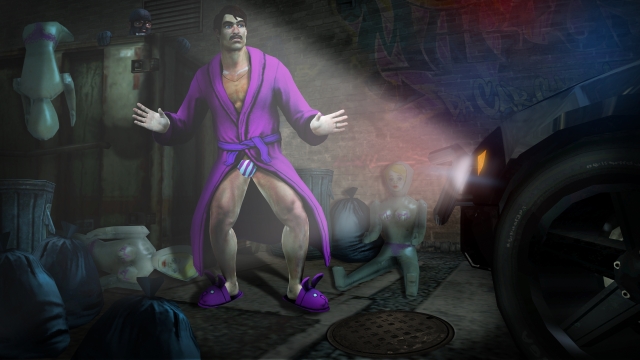 You might notice that Saints Row 3 is missing the robust multiplayer stuff that was in Saints Row 2. When I say "robust", I'm only guessing because I never really bothered with it. I was too busy digging on the virtually endless single player game. The equivalent in Saints Row 3 is Whored Mode, an inconsequential sideshow that feels like it was tacked on only because someone thought of the name. Get it? Whored mode? Horde mode? Whored and horde? Rest assured that nearly every other joke in Saints Row 3 is actually funny.

Normally, I'd have cut that last paragraph. Whored Mode is kind of lame, huh? Who cares? But I left it in because it's embarrassing to gush this unreservedly about two open-world games that have come out at the same time. Both Batman: Arkham City and Saints Row: The Third are dazzling examples of how videogames have matured. Yes, matured. Even though Arkham City is about a comic book character and even though Saints Row 3 is unafraid to be lowbrow, there is nothing juvenile about how these games are so lovingly crafted, carefully built, made of gameplay and characters and world design, shining with the wisdom and insight of a confident developer.

"Awesomer and awesomer!" you'll cry as you plunge down the deliriously wondrous rabbit hole that is Saints Row: The Third. This is no mere videogame. It is more than 25 hours -- probably far more -- of unadulterated delight straight to the ol' amygdala. Go with it. Let it work its magic. It's so good it's nearly chemical.

© 1998-2021 HonestGamers
None of the material contained within this site may be reproduced in any conceivable fashion without permission from the author(s) of said material. This site is not sponsored or endorsed by Nintendo, Sega, Sony, Microsoft, or any other such party. Saints Row: The Third is a registered trademark of its copyright holder. This site makes no claim to Saints Row: The Third, its characters, screenshots, artwork, music, or any intellectual property contained within. Opinions expressed on this site do not necessarily represent the opinion of site staff or sponsors. Staff and freelance reviews are typically written based on time spent with a retail review copy or review key for the game that is provided by its publisher.