I know what I expected from Fire Mustang. Hell, Id already mentally written the introduction about how Taito dropped the ball by publishing NMKs arcade port. Id make fun of some historical inaccuracies such as a Japanese developer making a World War II game in the vein of Hollywoods long-standing battle against continuity by having America single-handedly win the war. Perhaps I'd have some laughs about Spain being used as a backdrop despite its complete neutrality during that period. Then Id be free to rip the game to shreds.

Except, no. Fire Mustang and its awful, awful name (the original arcade version this Mega Drive port was based on called itself US-AAF Mustang; its slightly better) turns out to be competent. Then enjoyable. Then plain sadistic.

The opening stage flies you over serene scenes of sunny Spain. Formations of the Luftwaffe glide in from the right, while you mow them down from the left. Your basic weapons of a rapid-fire machine gun and an infinite supply of arcing bombs are unchangeable, but can be upgraded by picking up the burnt carcasses of defeated special crafts. The obligatory clear-screen nukes make an expected appearance and everything feels like youd expect. This opening stage is easy, giving you a chance to bed in and collect upgrades. The giant fighter plane that serves as level boss goes down with a whimper.

It was only after this that I started to suspect Fire Mustang was not what it seemed. The second mission plots you through acres of swampland where smaller, faster fighters plague you while armed boats skim across the waters surface, ploughing tracers into the sky. Then! A huge Imperial Japanese Navy Air Service bomber (look, I didnt name them, all right?) appears high on your flank and attempts to drop bombs bigger than your fighter right on your head. 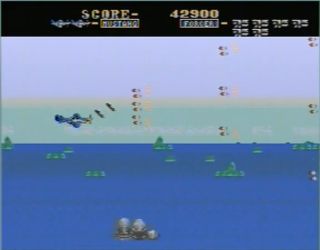 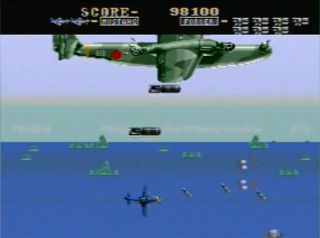 Level three takes you to the clouds, where a few battalion of planes fall quite easily to your onslaught before climbing bogies do their level best to harpoon you from below, ploughing shrapnel into the skies should their unexpected kamikaze actions fail to bring you down. Then, after a few waves of targets drifting almost lazily onto the screen and downed in record number, you start to feel like the worst has passed. It hasnt. Youve been had. 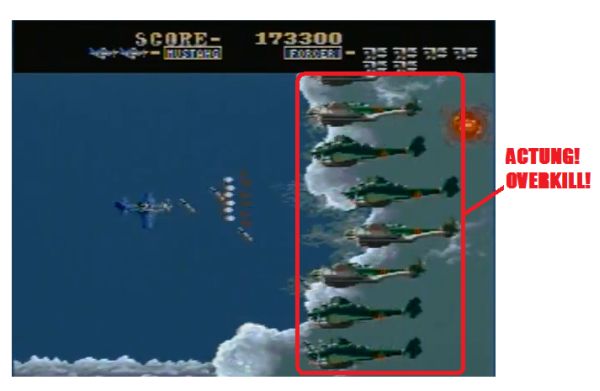 You can survive this. Concentrating fire on a single craft will destroy it just in time to grant you safe passage through the corridor your violence had reaped, or you can just fire the screen-clearing Forcer Bomb to see the entire formation off. But, odds are, youll do neither. Youll weave around and flood the screen in panic fire and then, youll die.

The second half of the level throws all these things at you in set intervals that doesnt give you enough time to adjust. Theres smattering of smaller planes quickly segmented by a wall of climbing enemies before the screen is filled with giant craft again. You resign yourself to these three instances being sprung at you unexpectedly, before what seems to be the 1940's version of sonic jet fighters flood the screen en masse, surging towards you, and filling the sky with hulls and projectiles.

The next stage (in a desert!) continues the trend of small, fast craft being everywhere, but adds APC and gun emplacements for you to try and seek out with your cascading bombs. Giant gliders fire off rockets in irritating starbursts while torpedoes launched off-screen will ignite afterburners and surge at you if not destroyed immediately. Stay alive long enough for night to descend, and all that's left is a trio of advanced super-fighters and a hailstorm of missiles constantly being launched right at your nose.

Youre not even half way through the game yet. All youve done is run through the easier stuff.

Aztec-inspired levels flood the screen with as much as they can think of to down you early. Light, nimble craft intermix with plodding slow ones that take a huge barrage of artillery to fight off while anti-aircraft tanks roll in on the ground to try and get a bead on you. Fighters surge low to the ground, then loop back round on your flank to pump rounds into your blindspot while airborne carriers spit out forever-spawning waves of nuisance. Just when you start to think theyve run out of things to throw at you, some nefarious Nazi bastard releases the explosive weather balloons! 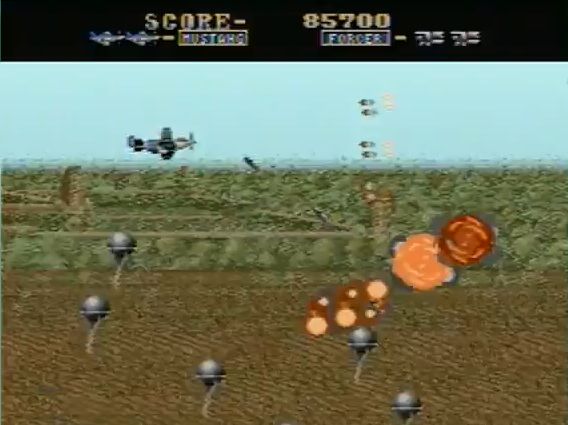 Mountain range battles have you pursuing a retreating fleet trying their best to dissuade your chase, making you weave through huge craft too numerous to down while tail-gunners constantly fire off round after round. Other levels are dedicated entirely to long-running boss fights against impossibly huge imperial mega-fighters. Your craft is responsive, your enemies numerous and vengeful. And there went any plans I had of writing a quick bash review and getting on with the rest of my weekend.

Because Fire Mustang deserves a little more than a quick mention then to be cast back into the wilderness; its probably one of the better scrolling shooters you never heard of. It doesnt have blistering difficulty or colourful, vibrant graphics, but it does have a rocking guitar soundtrack and a lot of accessibility. In a genre filled with people constantly searching for the next forgotten gem that only they know about, NMKs WWII shooter was never going to be flashy or memorable enough to be championed, but its certainly clever enough for me to appreciate. More so than many other scrollers I can recall, it goes out of its way to lull you into a false sense of security over and over again, only to unleash something youd no way of expecting. Vertically climbing fighters; walls of huge ships; sudden looping aircraft and waves of exploding balloons.

So, just this once, Ill ignore the easy digs, like how the game starts in 1940, while America didnt enter the war until 1941. Or how the P-51 Mustangs I assume the game is based around were not readily available until around 1943. Instead Ill mention how I stumbled upon a game I enjoyed playing despite looking for one to bag on. Its a slice of serendipity worthy of mention.

If you enjoyed this Fire Mustang review, you're encouraged to discuss it with the author and with other members of the site's community. If you don't already have an HonestGamers account, you can sign up for one in a snap. Thank you for reading!

© 1998 - 2023 HonestGamers
None of the material contained within this site may be reproduced in any conceivable fashion without permission from the author(s) of said material. This site is not sponsored or endorsed by Nintendo, Sega, Sony, Microsoft, or any other such party. Fire Mustang is a registered trademark of its copyright holder. This site makes no claim to Fire Mustang, its characters, screenshots, artwork, music, or any intellectual property contained within. Opinions expressed on this site do not necessarily represent the opinion of site staff or sponsors. Staff and freelance reviews are typically written based on time spent with a retail review copy or review key for the game that is provided by its publisher.