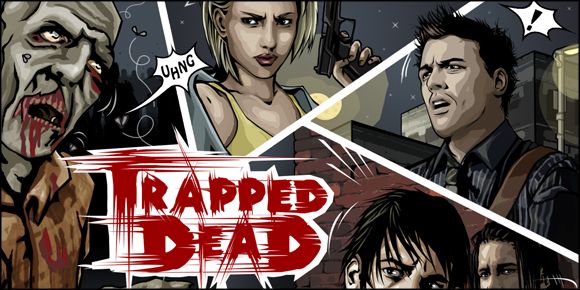 Trapped Deads premises is a dream scenario for a select gaming niche; it promises a strategy foundation powering a zombie apocalypse for thinkers and plotters. The game features a small cast of survivors, an army of shuffling, flesh-eating corpses and, sadly, a lot of squandered potential.

Its not hard to discover where the inherent flaws lie; there are good ideas aplenty in Trapped Dead, and the game isnt without its ambition, but the project feels unfinished and rushed. Starting in the obligatory settings of an eerily silent town, your initially lone protagonist has to sneak though a gas station, smacking zombies in the face with baseball bats and squashing the undead flat with the aid of an elevated car lift, a spot of sneaking, and a conveniently placed drop button. Trot through the tutorial trappings where you learn the basics, and youre suddenly warned that you need to be somewhere else very quickly. Its only when you try and get there that you notice the first real issue: the controls suck.

Tasked to hightail it back to your friend who elected to chill in the car while you explored, you find him under heavy attack, as people prone to chilling in the middle of a zombie apocalypse are wont to be. Youre told how to dial your pace up from Indifferent Plod! to Power Walk!, click your desired destination, then watch as the character wanders off somewhere else at his accelerated shuffle. At least after he often undertakes a huge pause while he seemingly ponders the complexity of your simple commands. If the controls are a struggle on their own, the path finding goes out of its way to introduce a crowbar to its already fragile kneecaps. 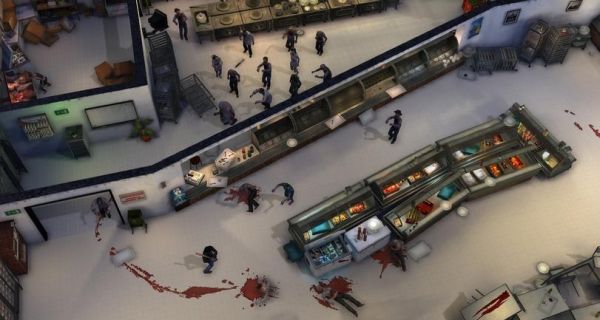 Trapped Dead is an odd little game. It looks like what it really wanted to be was a turn based strategy in the vein of X-Com and Jagged Alliance, but obviously feels that kind of hackneyed antiquity is better left off in the 90s, so awkwardly shoehorns in an RTS engine instead. This makes the delay between the giving and the execution of your orders and the characters inability to set a plotted course particularly disastrous. Less of an issue, perhaps, in the opening tutorial where your priority target is a plot-attacked victim who will simply flail away in panic until you bother to get there, but progressing further into the game will see you building a team of survivors taking on much more challenging odds and goals. Here, every unwanted pause or slice of misdirection could easily be the difference between making it alive to a choke point and surviving a little longer, or being overrun by the advancing hordes.

Other aggravating errors persist throughout. Mid-level cut-scenes or plot-lines are played out through a commendable comic book presentation, but, while these progress, the game will sometimes continue to keep playing in the background. You might have to watch a short clip of a locked door or a point of interest and, while this scrolls on, zombies move in with you unable to do a single thing about it. Subtitles are often misseplt at times or suffer from poor punctuation at others. Though since patched, the initial outing of the game had a literal dead end situation where a generator you needed to power on simply would not respond to your prompting, meaning it was impossible to progress the game. Once the patch was released, it changed the games dialogue to German with no way to change it back. I had to bypass the now working generator section and limp my way to the next save point in a foreign language, copy the save file then reinstall the game --un-patched -- before copying the save file back in just so I could continue the game in English. 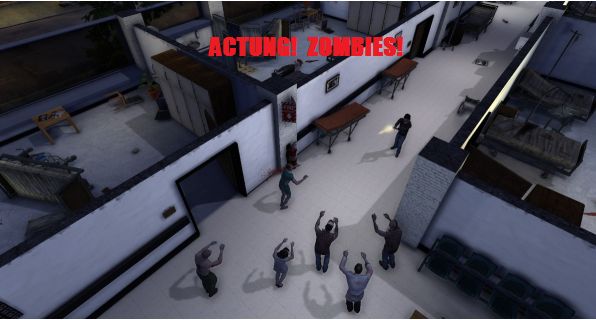 And so I left this review for several months after it dropped into my review pile in the hopes that an eventual fix would be forthcoming. I thought the game had enough potential to give it this chance at a lifeline, but nothing has been forthcoming. Heres the kicker behind all the complaining: I could have easily seen myself enjoying Trapped Dead. Dual obsessions with strats and the undead may have ensured Ive not had a date in months, but it does make me the exact target audience for this game. For long stretches of time, I even enjoyed my thinking mans romp through the legions of brain-munchers. The eventually-gathered party of survivors are somewhat unique, including a wheelchair-bound doctor whose slow progress makes you feel even more nervous should the undead manage to get their teeth into a character. Get hurt enough and start to bleed out, and the stench of blood will start to attract the hordes towards the walking wounded. Clever players might use this to their advantage to lure zombies away from the others, or sucker them into a kill zone; less capable players will see already struggling team-mates very shortly become dead ones.

Then the game reminds of its faults. In the midst of battle, against staggering odds, youll be finally turning the tide before the camera swoops away to show the location needed to finish the level and, by the time it returns, you're already overrun by an advance you had no way of stopping. Or maybe you've put a weapon down on the floor for a second while trying to re-jig the limited inventory, and its somehow morphed somewhere out of reach, lost forever. Maybe attempts to flee unstoppable numbers, or a desperate flight to save a besieged team-mate, go awry through no fault of your own, but simply because commands are ignored while people stand around like lemons.

Heres a scary thought for you. Its not only my job to play through these games, but Im the exact target audience for Trapped Dead and even I couldnt battle through the sea of errors. Give it chance after chance to try desperately to discover glitter amongst the muck, but youll only find it in glances. The errors, the bugs, the flaws, oh god, they're everywhere. In number and in menace, they drown out the games zombies. Theyll become your biggest fear. But instead of eating away at your brains, theyll instead devour any interest you once had of continuing.

If you enjoyed this Trapped Dead review, you're encouraged to discuss it with the author and with other members of the site's community. If you don't already have an HonestGamers account, you can sign up for one in a snap. Thank you for reading!

© 1998-2021 HonestGamers
None of the material contained within this site may be reproduced in any conceivable fashion without permission from the author(s) of said material. This site is not sponsored or endorsed by Nintendo, Sega, Sony, Microsoft, or any other such party. Trapped Dead is a registered trademark of its copyright holder. This site makes no claim to Trapped Dead, its characters, screenshots, artwork, music, or any intellectual property contained within. Opinions expressed on this site do not necessarily represent the opinion of site staff or sponsors. Staff and freelance reviews are typically written based on time spent with a retail review copy or review key for the game that is provided by its publisher.