The war was supposed to be over. After getting their asses kicked in Revenge of the Fallen, the Decepticons fled back into space, hopefully never to be seen again. The humans think theyre finally safe, but Optimus Prime knows better. He and the Autobots have been keeping watch over the Earth for the past three years, and their vigilance has finally paid off. Theyve intercepted a transmission that details Megatrons latest plan for world domination. A massive horde of evil robots have descended upon the planet with only one goal: destruction. With mankind once again on the verge of utter annihilation, the Autobots have to regroup and finish off the Decepticons once and for all. 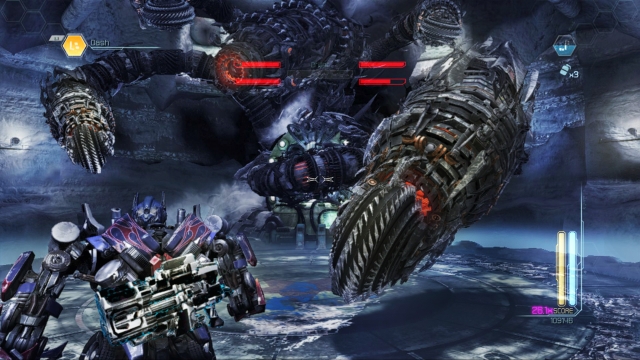 The latest battle in the Transformers saga spans the entire planet, and youll get to see it from both sides. Rather than spending time explaining the story, the game assumes youre already familiar with the plot and drops you into the first area. Its not like theres much to miss  the series is about giant killer robots that can turn into vehicles  but those of you that skipped out on Revenge of the Fallen are going to be left in the dark. Youll be first given control of Bumblebee, the unofficial mascot of the movie series, and spend a level learning the basic gameplay mechanics. As you progress through the stages, youll get to play as some of the iconic heroes and villains of the ensemble cast. Youll have to help Ironhide save downtown Detroit from the clutches of Mixmaster, explore ancient ruins with Mirage, wipe out a military base with Soundwave, and blast your way through several Autobots with Starscream. The fighting eventually escalates into a showdown between both forces and leads into the events of the movie.

Being able to play an assortment of characters is a great idea; it lets you see the conflicts from all sides, and it gives both heroes and villains some much-needed personality. The problem is that, despite all its variety, the story is horrendously short and unfulfilling. The campaign is only seven stages long, and theyre far too brief and simplistic to be fun. Rather than being allowed to explore a vast map, youre forced into blatantly linear warpaths with brief obstacles placed along the way. Progression usually involves getting stuck inside of a huge room and having to kill anything that moves. The game tries to spice things by having you access computer terminals to collect data, sneak past guards and infiltrate facilities, race the opposing faction to checkpoints, or cover allies as they fight through enemy lines. However, none of these moments are particularly engaging; the objectives rarely go beyond getting to a certain area (helpfully pointed out by an onscreen marker) and pressing a button. Such missions require little thought or creativity and they dont distract you from the repetitive nature of the stages. Just when youre starting to get used to your character, youll reach the end of the stage and have to restart the process with a new robot. 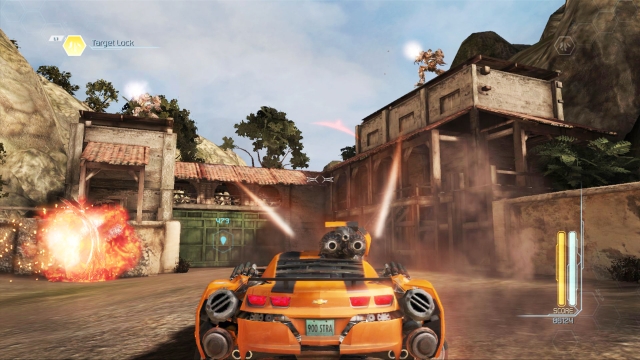 Things wouldnt have been so tedious had the combat been better designed. Each character comes with a small assortment of weapons, ranging from assault rifles and laser cannons to grenade launchers and sniper rifles. Their attack powers and firing rates differ enough to offer some variety, but the designs are generic and uninspired. Youd think gigantic alien robots would be able to wield something better than fancy-looking human guns. Everyone has a unique secondary ability, like Bumblebees power to tag and track onscreen enemies, or Soundwaves metal-crushing energy pulses. Aside from a handful of occasions, however, youll never have to use them. Take Mirage, for example; he can temporarily activate a cloaking device and slip by enemy forces. What could have been a clever stealth-based stage devolves into a boring and mind-numbingly easy infiltration. If you want a real challenge, you can perform melee attacks (which usually involve some poorly-animated acrobatics), but the hit detection is so unreliable that youll never want to use them. Instead, youll spend the majority of the game in vehicle mode, where your character possesses unlimited ammunition, stronger defenses, and vastly improved maneuverability. Since there are only a few instances that require you to be in robot mode, theres no incentive to transform back. It wont guarantee your survival  you can get slaughtered even on the default difficulty - but the utterly broken and unbalanced design will make a difference.

Speaking of poor design, the rest of the game is riddled with glitches. Issues start off small, with some infrequent slowdown and pop-ins. But youll eventually reach points where the AI and level structuring start going haywire. The enemies occasionally stand in one spot, refusing to attack or follow you beyond certain distances. Some NPCs wont interact with you unless youre practically next to them, and others will simply stop acknowledging your presence and leave you unable to continue the mission. Its entirely possible to get stuck inside seemingly unreachable areas or between invisible walls. One stage has you jumping over a river of lava, but you wont die unless you land directly in the middle of it. Physics arent reliable either; you can send hulking robots monstrosities flying if you hit them at maximum speed. Upon receiving one of these attacks, my Soundwave magically flew up and over a volcano and landed in a field with see-through hills and incomplete beaches. Its this kind of stuff that makes the already generic gameplay that much worse.

If the main campaign proves too annoying, youll be better off focusing on the online multiplayer. You and a handful of strangers can spend hours killing each other via Free-For-All, Team Deathmatch, and Conquest modes. None of the maps are particularly interesting; fighting usually involves everyone converging in one area shooting inaccurately. It doesnt require a lot of strategy  survival is typically determined by who has the best defenses and attack power  but it can be fun and engaging. Youre allowed to create a Transformer based on four character classes, ranging from the faster and weaker Scouts and Hunters to the more powerful but slower Warriors and Commanders. If you play well enough, youll be rewarded with bonus points that go toward unlocking secondary abilities and customization. You eventually be able to carry more weapons, have better aim, improved durability, and a handful of other powers. Theres nothing original about any of them, but at least they give you a reason to keep playing. Considering how shallow the rest of the combat is, youre going to need anything you can get. 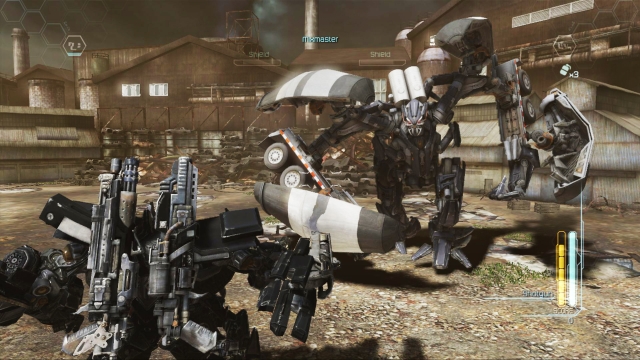 The game tries to make up for its shortcomings by focusing on its visuals. Youll fight in all kinds of locales, ranging from small towns and cities to underground bunkers and tropical islands. Some of these areas are surprisingly detailed; you can see the burning wreckage that used to be Detroit, right down to the gaping holes youll have to carve through the remaining skyscrapers. The Mayan ruins and military installations have decent lighting effects, as well, and the boss battles  particularly those fought against Mixmaster and Starscream  are chaotic and flashy enough to keep your attention. The problem is that, despite all of its variety, the stages are crammed with mere set pieces. Theres little ambience or tension involved; youll eventually stop caring about your surroundings and make a beeline for the nearest goal. Many of the areas are devoid of enemies, forcing you to wander through pointless sections until you activate the next objective. But even when theyre at their finest, the graphics will seem bland and dated; the textures lack polish and the animations are choppy. If titles like Vanquish and Metal Gear Solid 4 are any indication, the PS3 is capable of far more than this.

That could be said for the game as a whole. Transformers: Dark of the Moon has some interesting ideas, but goes absolutely nowhere with them. It lets you play as the main characters of both the Autobot and Decepticon forces, permitting you to see the war for Earth from different perspectives. However, the levels are too brief and simplistic to offer any satisfaction. The objectives are mind-numbingly easy, and the stages have little in terms of exploration or ambience. While the robots individual powers offer some variety, theyre poorly utilized. The combat can be chaotic and difficult, but the generic weapons and the horribly unbalanced vehicle modes arent appealing. The unreliable hit detection and physics, questionable AI, and glitchy stages also dont help much. Even the online multiplayer, which is far more fun and involved than the campaign, doesnt have much in terms of depth and strategy. Its kind of ironic; for a game thats designed to promote a movie, Dark of the Moon will probably encourage you to skip it entirely.

If you enjoyed this Transformers: Dark of the Moon review, you're encouraged to discuss it with the author and with other members of the site's community. If you don't already have an HonestGamers account, you can sign up for one in a snap. Thank you for reading!

© 1998 - 2022 HonestGamers
None of the material contained within this site may be reproduced in any conceivable fashion without permission from the author(s) of said material. This site is not sponsored or endorsed by Nintendo, Sega, Sony, Microsoft, or any other such party. Transformers: Dark of the Moon is a registered trademark of its copyright holder. This site makes no claim to Transformers: Dark of the Moon, its characters, screenshots, artwork, music, or any intellectual property contained within. Opinions expressed on this site do not necessarily represent the opinion of site staff or sponsors. Staff and freelance reviews are typically written based on time spent with a retail review copy or review key for the game that is provided by its publisher.