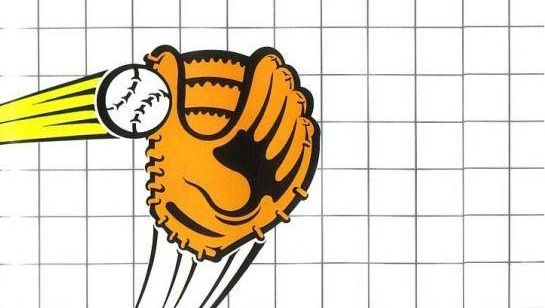 I've had it with empty promises.

Didnt Sega ask itself that most obvious question that begs answering even now? What if the baseball game we make for our beloved Master System isnt great? What then? Wont we look like fools? What then? Will we fold? Most likely someone did ask that question, but was promptly fired and replaced by someone elses son, and the so-so game that is Great Baseball was released anyway.

Lest you think my derisiveness comes from a lack of respect for classics, Ill have you know that my favourite sports game of all time is World Class Baseball, for the defunct Turbografx-16, certainly an oldie in its own right. The difference is, that game is an oldie but goodie, and this one is just... old. 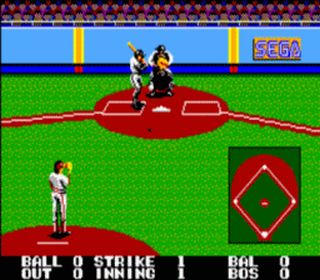 There are six modes of play. Two levels of single player action, and two levels of two-player simultaneous competition. Add to that two levels of a surprisingly addictive Home Run contest, and youve run the gamut of Great Baseballs option screen. There are no team edit modes, no substitutions, no bullpen, no closers, no tournaments, no World Series, no running statistics. Youve got what is basically an exhibition game setup, on two difficulty levels, with the option to play versus the computer or a friend.

I would recommend level one in either case, because level two forces you to do your own fielding, and the fielding is horrible. The graphics are bad -- blocky and grainy -- and a potential hit will result in the screen showing the whole field at once, a tight, awkward fit to be sure. The tiny fielders will run aberrantly and relentlessly, but will appear to be going nowhere. This is because there are no diagonal animations; to chase down the ball, a fielder will be seen running say, to the right, while simultaneously being dragged up or down (as the case may be), as if by some invisible string. Because it looks bad, its difficult to track balls that have been hit, which, insofar as hitting, makes Great Baseball play badly as well. 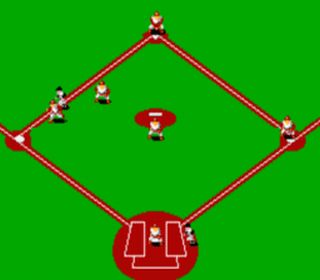 Of course, all of this assumes that you are able to get a hit in the first place. Great Baseball uses a behind the pitcher viewpoint, common to most television broadcasts of the sport. I prefer the behind the hitter view myself, because youre able to time your hits and pitches better since the plate is close at hand. As it is, this pitcher-on-the-mound view would not be so painful if only the graphics were clear, but theyre not. So it will take you a good deal of practice to get the games intrinsic timing down. I honed my hitting skills in the Home Run contest, and not only did it pay off with in spades (if only you could bear witness to my newly acquired Barry Bonds-like slugging mastery), but it allowed me to spend some time with the most fun element offered by Great Baseball.

Youre given 20 pitches to hit as many home runs as possible. Fouls, strikes, in-field hits -- they all count against your 20 pitches, so its a game of tater or bust. Its very enjoyable just seeing how many you can hit, and you may find yourself sewn up by the primitive contest.

Unfortunately, that probably won't be the case for the game as a whole. Its shamefully short on options and extras, offering up little of merit other than the stiff commentator who shouts ''BALL!'', ''STRIKE!'', ''STRIKE OUT!'', and ''HOME RUN!'' at the right times. A good list of options can help a sports games appeal and replay value immensely, and certainly Great Baseball needed the help.

Also, while the pitching is decent, as is the case with the hitting, it is held back by the poor visuals. The game allows you to choose from one of four pitchers, attributing to them a specialty pitch from four available types (fastball, knuckleball, change-up, slider) before beginning play. Once again, due to the home plate position and your vantage point, its hard to see just how your motion on the control pad is affecting the way the ball passes over the plate. And because theres no pitching derby/contest, perfection of the art of rawhide hurling will be longer in coming than was the hitting.

My final complaint is that Great Baseball leans toward the slow-paced side, and unnecessarily so. As mentioned before, the fielding leaves much to be desired in its painstaking slowness, but besides that, must we wait so long after a foul ball drops into the 'audience' (a smear of pixelated colour, between you and me) before resuming play? And when it comes time for a new batter to step up, we're ushered into the company of a black screen that shows the names of the players (this is the only time you'll see your line up) and stays up too long. Surely a smoother indication of your line-up could have been employed. 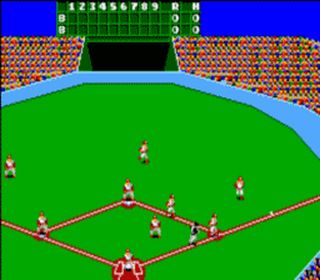 All of the flaws inherent in the way Great Baseball plays will likely limit any enjoyment you find in the package to the home run derby and nothing more. The possibility that you'll play beyond the tater contest is very slim -- certainly it's contingent upon how few other games you have to play. And that's because Great Baseball is neither great, nor is it even marginally recommended. If youre a diehard Master System fan who has to have some baseball action rock your sleek black 8-bitter, at least make sure you have a friend to play with to make things a little more interesting. Actually, scratch even that. If youre looking for great baseball, look almost anyplace else.

If you enjoyed this Great Baseball review, you're encouraged to discuss it with the author and with other members of the site's community. If you don't already have an HonestGamers account, you can sign up for one in a snap. Thank you for reading!

© 1998-2022 HonestGamers
None of the material contained within this site may be reproduced in any conceivable fashion without permission from the author(s) of said material. This site is not sponsored or endorsed by Nintendo, Sega, Sony, Microsoft, or any other such party. Great Baseball is a registered trademark of its copyright holder. This site makes no claim to Great Baseball, its characters, screenshots, artwork, music, or any intellectual property contained within. Opinions expressed on this site do not necessarily represent the opinion of site staff or sponsors. Staff and freelance reviews are typically written based on time spent with a retail review copy or review key for the game that is provided by its publisher.