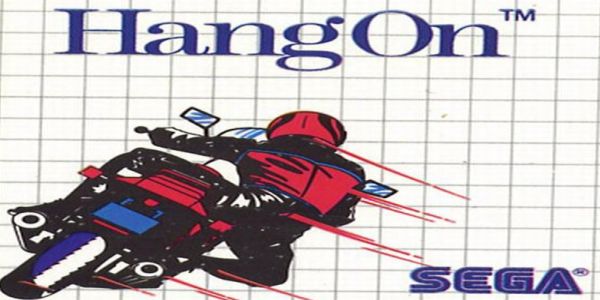 Realize right away that Sega had to make major compromises and concessions to downsize their massive motorcycle arcade game for handling by the comparatively diminutive power of their Master System.

If a near perfect port was on your hitlist, don't even bother reading on -- for you, there's Super Hang On.

I wasn't looking for a perfect port. I wasn't looking for anything at all. Hang On came packaged with my brand spankin' new Sega Master System and I loved that I had bought my first console, and I loved Hang On because it was my first game. I spent a lot more time on the game than I otherwise would have, but I hadn't any other games. I knew this even as I plugged in my dusty Hang On cartridge to revisit it. I knew very well that it wouldn't really be as colourful or as sparkling as it once seemed.

I was right of course, and I hated that I was right. However, Hang On is still enjoyable, in its small way.

The music at the title screen is cheerful and catchy, and it's a good thing too: it's the only music you'll hear in the game. Sounds during actual gameplay are limited to those made by your motorcycle revving, and your tires screaming as you hit turns and struggle to stay on the road. You'll also hear a rather annoying bumpy sound such as a remote controlled car might make were to run over a row of G.I. Joe figures. That sound emits when the tires' grip gives out and you run the bike onto the shoulder. 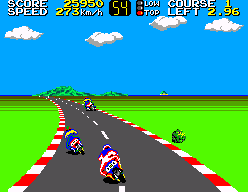 There are rocks, or cacti, or light posts on the shoulder at short intervals, to create the illusion of forward motion -- as well as to give the foreground some life and to endanger yours. If you hit something, anything, you'll blow up. The explosion looks rather small, like your bike is imploding, or like the effect was ported over from a different game. What follows is a time-eating sequence of your bike reappearing on the track. You'll have to shift back up through the three gears to reach full speed again, at around 300 kilometres per hour. That's fast. As mentioned, the scrolling is primitive, but it's convincing enough, and most times you'll really need to pay attention to what you're doing to stay on the road in the turns and to avoid the other riders. Yes, there are other riders, but they aren't your main concern; you're much more likely to crash into a roadside marker than another biker.

During the straightaways you shouldn't have any problems at all, unless you're really, really crap. Even if there are two bikes on the screen other than yours, which is probably the most the screen can accommodate, you should easily be able to weave around them, tapping left and right, if you're on a straightaway. If you can't, then videogames aren't for you.

But the turns! The turns are a different story. There are three types: The sharp turn is the most common. It requires that you bank sharply into the curve and let off the gas. Close attention to upcoming signposts and a delicate touch will see you through these.

There's also the gradual turn, which is like the sharp curve, only... more gradual. Finally, there's the killer "S" curve, which is a sharp turn one way, and then the other. (This curve is in the shape of an "S".) This is the godfather of turns. It's tricky until you get the hang of knowing exactly how much to let off the brake when turning. Things get especially hairy when the screen randomly crowds you with two other racers during an "S" turn. This situation is as challenging as the game gets, the most action it can provide. 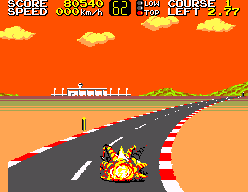 Hang On only has five stages, and they're all the same aside from minor aesthetic variances. The first has you heading toward some kind of building in the daytime. Then you move into a sort of dusk wasteland area, then a desert scene (this is where the cacti come in, that's how I know it's a desert area -- that, and the brown on the side of the road). After the desert, it will be nighttime, and you'll be heading toward a city. This level looks really slick, because everything will be blue black, and the white stripes on the road and the white of the city lights in the distance provide a nice contrast. It's the best looking level in the game by far. Finally, you arrive back at the stretch of road leading to the mysterious building that you'll never reach. Now the sun is setting, or so it seems, but the poles marking the side of the road are the same as before.

Once you've cleared the five phases of a race in Hang On, be expected to clear them again. And again. It's a loop, and things get slightly more challenging each time through. In later stages, bikers will sometimes approach you dangerously from the rear, and that's scary, like prison.

I still enjoy playing Hang On, although I normally only play through one loop of action before switching it off, whereas before I would play the loops until my eyes started to get tired, and tear up. I've got more and better games now, so spending that much time with a game this repetitive and limited doesn't make any earthly sense.

But spending a little time feels right. Not for old time's sake alone, but because Hang On is a fast paced challenge of coordination that is simple and easy to get into. It provides a fleeting experience, but it's so simple and charming and unpretentious that you will leave each session satisfied with the fun, fast times you had with it.

If you enjoyed this Hang On review, you're encouraged to discuss it with the author and with other members of the site's community. If you don't already have an HonestGamers account, you can sign up for one in a snap. Thank you for reading!

© 1998-2021 HonestGamers
None of the material contained within this site may be reproduced in any conceivable fashion without permission from the author(s) of said material. This site is not sponsored or endorsed by Nintendo, Sega, Sony, Microsoft, or any other such party. Hang On is a registered trademark of its copyright holder. This site makes no claim to Hang On, its characters, screenshots, artwork, music, or any intellectual property contained within. Opinions expressed on this site do not necessarily represent the opinion of site staff or sponsors. Staff and freelance reviews are typically written based on time spent with a retail review copy or review key for the game that is provided by its publisher.