Fans of the wildly popular strat-RPG series Disgaea are likely familiar with spinoff of sorts Phantom Brave, which takes much of Disgaeas quirkiness and attitude and ramps things up a bit with a lighthearted narrative and intuitive sans-grid battle system. It takes a sharp turn from Disgaea in terms of tone and even the way things play out, but rabid NIS fans flock to it for much of the same reason they eagerly devour parts of the Disgaea saga. Phantom Brave: Heroes of the Hermuda Triangle is not the third in what you would assume is a series of Phantom Brave outings, but is in fact the third reissue of the fantastic game that first appeared on the PlayStation 2. After a successful Wii port with substantial upgrades and additional content, NIS America has brought the action to the PSP to take the show on the road. The same source material is here, as well as some new content, but is the third time a charm? Is this the definitive Phantom Brave? 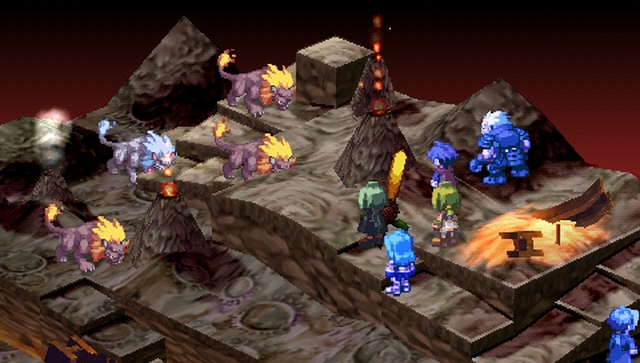 Our journey to the answer starts with a sprightly young girl named Marona. In her humble little home on tropical island Ivoire, she lives out her days with phantom Ash, a Chroma, or sort of bounty hunter. Ash raises her in the stead of her parents, as little Marona is an orphan. She possesses the ability Chartreuse Gale, which makes her a bit of a pariah amongst the locals -- because she can control this unique skill, most of the inhabitants of Ivoire assume she must be controlled by malevolent spirits. Its difficult for Marona to make friends, much less pick up contracts for Chroma work, because of her special powers. Still, the steadfast little bounty hunter holds her head up high. Her sunny disposition and willingness to aid others is infectious, which guardian Ash (who worked alongside her parents for Chroma business) cannot wrap his head around. And as the evil that threatened Maronas parents (as well as the entire island of Ivoire) fast approaches once again, its up to this cheery little Chroma and the few true friends she makes throughout her adventures to keep everyone safe from harm.

As previously mentioned, Phantom Brave is quite different from Disgaea, primarily because of its lack of a grid-based battle system. Grid-based battle systems are a mechanic thats typical of strategy RPGs, and their absence is a little rattling at first, but once you get used to what Phantom Brave opts for instead, you might find that this system actually feels more natural. When you place units on the field, rather than being awarded spaces to move, they have a movement radius, or what the game calls dm. Different types of terrain can affect the way your troops move throughout the maps -- bouncy and slippery parts of the world can be particularly annoying when attempting to plan for strategic assault, though you might find that skating through the slippery areas consumes less dm. It can be a little more difficult than planning how many spaces ahead you should move, but after your first few battles youll wonder why more strat-RPGs have not adopted the same system.

Even the way Marona and her allies battle is unique. Marona must confine phantoms to items on the map such as trees, flowers, rocks, etc. Depending on which items you choose, there are several different stat bonuses to benefit from. Because the phantoms themselves have no true physical form, its important to utilize each phantoms unique ability and augments before they disappear from the field. In addition, after every completed kill, characters receive mana. It can be used in turn for character fusion, a character to an item, or even a two-item fusion. As you can imagine, the possibilities are virtually endless. They make the fusion system easily one of the deepest parts of Phantom Brave and a boon for strategy fans. 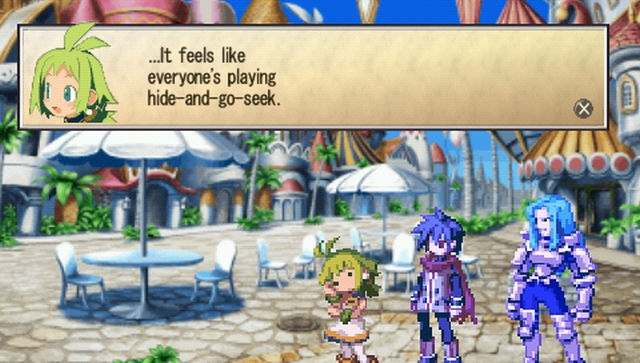 Now, with the basic premise and fantastic battle system spoken for, what of the improvements from the Wii version to the PSP? Which version should you choose when faced with the choice? The first thing to keep in mind is that this version is considerably less jam-packed with new features than its previous iteration. The Wii port brought plenty of new content and characters with it, and while were seeing that here with Heroes of the Hermuda Triangle, the amount of additional content is fair to middling at best. Coupled with the fact that the game is not optimized for the PSP, with blurry, muddled backgrounds and jagged sprites that could have benefited from tightening and optimization, I couldnt shake the impression that this is a very basic, almost lazily-produced port -- and the only real boon I could find was the fact that its now portable, which to me makes more sense than leaving the game a console exclusive. Strategy RPGs and portability go together like peanut butter and jelly, and if you never did splurge on a Wii, this edition is a step above the original PlayStation 2 release by far. Its certainly not the definitive release, though, not by a long shot.

Phantom Brave: Heroes of the Hermuda Triangle is still an engrossing adventure and when you reach the end youll likely be plagued with the same question myself and many other fans have been pondering for ages: why hasnt this adventure met with the same love and care that Disgaea has? Perhaps well never know, but if youre a newcomer and you need an entry point to Phantom Brave, I would suggest beginning with the great Wii port and then gravitating to the PSP for handheld strategizing should you still ache for more. For everyone else who has already exhausted the PlayStation 2 original and Wii re-release, this really isnt something I would recommend adding to your collection unless the potential to take Marona with you on the go is a serious selling point. This is an interesting try at making the game a portable smash, but in the end it falls a little short of the mark. Get a Wii, and try it there.

If you enjoyed this Phantom Brave: The Hermuda Triangle review, you're encouraged to discuss it with the author and with other members of the site's community. If you don't already have an HonestGamers account, you can sign up for one in a snap. Thank you for reading!

© 1998-2021 HonestGamers
None of the material contained within this site may be reproduced in any conceivable fashion without permission from the author(s) of said material. This site is not sponsored or endorsed by Nintendo, Sega, Sony, Microsoft, or any other such party. Phantom Brave: The Hermuda Triangle is a registered trademark of its copyright holder. This site makes no claim to Phantom Brave: The Hermuda Triangle, its characters, screenshots, artwork, music, or any intellectual property contained within. Opinions expressed on this site do not necessarily represent the opinion of site staff or sponsors. Staff and freelance reviews are typically written based on time spent with a retail review copy or review key for the game that is provided by its publisher.