Thunder Force V: Perfect System has a lot of hardcore, vocal detractors  a cult anti-following, you could say. These horizontal shmuppers are quick to decry its faults: It doesnt look as good as Lightening Force, and thats a 16-bit game! And, theres more: It doesnt sound as good as the Sega Saturn version! Even 2D shooter fans who dont purchase outside of their PlayStation comfort zone pile on: It doesnt have the polish of an Einhander.

And theyd all be right. But who cares?

Perfect System plays as well as its Saturn counterpart, is more focused than the admittedly superior, but sprawling Lightening Force, and is far more intense than that handicapped shooter from Square.

Weve got the kind folk at Working Designs to thank for porting Techno Softs excellent offering from Japan. Well forgive Working Designs for using that poorly named sub-brand Spaz for distribution; at least they were generous and enthusiastic enough to document for us the entire Thunder Force legacy in the instruction booklet. 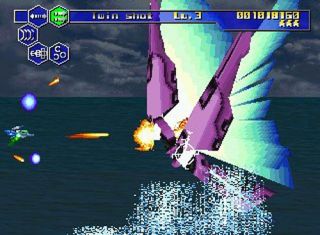 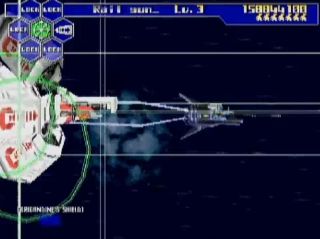 The story found therein, and in even greater detail in a document accessible from the in-game menu, is quite good, culminating in a long, surprisingly rewarding ending by shooter standards. I wont ruin it here, but in a nutshell, an alien intelligence created a weapon called Vasteel that you, as part of the Thunder Force must destroy. There is much more, but its almost a spoiler to delve into it in a review. Rest assured, that as with Einhander, some serious thought was put into it.

Regrettably, the games backdrops havent been approached with the same care. The first stage looks nice, but most others are unequivocally dull. Even the unique enemies come off like uninspired puddles of colour.

Not the bosses though. Perfect Systems bosses  well, thats a whole other issue. Before each of these amazing Guardians descends upon you, a robotic female voice will do the introductions, and an appropriately bombastic theme will play. The music is quite good, if not great; however, like the graphics, the sounds come off as muffled.

But never mind the technical shortcomings: The Guardians are a varied and imaginative bunch; showing off smarts and menace in equal parts. They use multiple attacks and boast astounding animations. The fourth level Guardian can be held up as an ideal example of a perfectly intense end-of-level shooter encounter. His transformations, super cannon, shield, and constant and bewildering movements will both challenge and impress.

Im wary of any further hyperbolic boss description, only because I don't want to ruin the many delightful and often surprising face-offs. Suffice to say that the lineup is sublime. 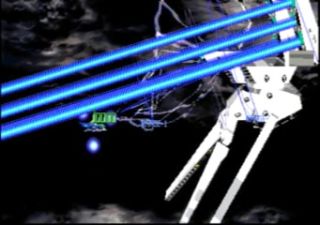 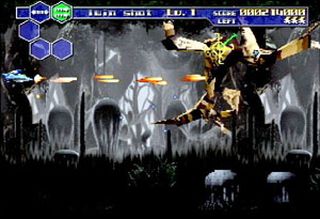 okay, I cant help myself. The Pièce de résistance, is the Final Guardian. He is so alien in his prettiness, so well animated, so deliciously cruel, that you begrudgingly endure how unfair he is. Beating him is hard enough, but whats worse is that if you dont beat him fast enough, he will fly away and leave you cursing at the screen as you are awarded with the incomplete, false ending for the millionth time.

Its not fun when you play for a half hour only for this angel of death to fly away after a few minutes. And so mastering him is what led me to play Time Attack (boss rush mode); you can reach him in only ten minutes or so if you manage to get through it.

Be forewarned that this mode is actually harder than the actual normal game mode, and though you will start fully powered up, you will never see another power up throughout. Also, as the name suggests, you are on the clock, and mistakes will be costly  dying in particular -- as that unfortunate circumstance will cost you ten seconds off your time.

That said, the restraints that the clock and lack of power ups force upon you, will help you master the hardest part of the game, the bosses. You will also be able to better learn the two essentials to Perfect System success: Free Range mastery and CRAW management.

No, thats not the name of a self-help business brochure. Typical of Thunder Force, you have five weapons to cycle through; twin shot, back shot, wave (useless!), hunter and Free Range, the most effective, devastating weapon this side of Gaiares T-Braster. If you get killed, you are put right back into the action, but you will lose the weapon you were using when you died, with the exception of the twin shot and back shot weapons, which are both standard onboard equipment. All the others you have to find along the way. Not so typical of previous games in the series, is the ability to assign each weapon to a different button, a la Radiant Silvergun. Becoming adept at playing with button assignments is crucial to preserving your Free Range weapon. That is -- you may die, but to die while using Free Range is disastrous. 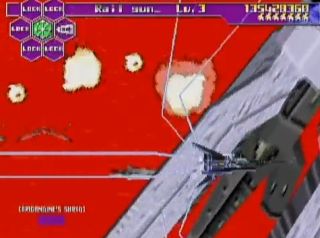 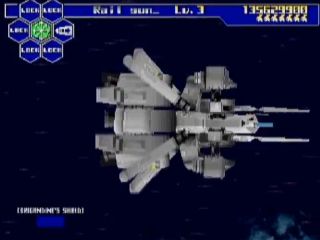 Powering up your arsenal is where your CRAWs come in. These are Constituted Ray Art Weapons. Or to be plain, they are orbs that you can collect (up to 3 at a time), that circle your ship, block bullets, and power up your current weapon. Charging up your current weapon before firing, unleashes the Overweapon. It's intensely powerful, but at a cost: it drains the power from the CRAWs until they go from a large blue dots to a smaller green, to tiny red dots that wdissipate when hit by bullets.

The effect of the Overweapon is a lot like the R-Type wave cannon, or more precisely, the R-Type III Hyper wave cannon. Obviously, excessive use of the Overweapon will ensure that you are always lacking CRAWS and therefore defensively crippled. Fortunately, the CRAWS are fairly abundant, and this is how practice in Time Attack mode will aid you. Because as you battle gamely through all seven bosses, Time Attack mode will not give you any CRAWS or weapons. If you lose Free Range early on, your game is essentially over, and the same thing goes for the CRAWS, though to a lesser degree.

The Normal Mode itself will seem easy by comparison, as it is extremely forgiving, supplying you with a good number of Free Range items throughout and tons of CRAWS for the taking. The first three levels are a warm up; the intensity of the later levels starting with the level four boss onward is nearly unparalleled. The graphic and musical intensity progresses in concert, but again, the presentation on the whole is really not up to par, and frankly a bit disappointing.

But muddled sights and sounds notwithstanding, Perfect System feels perfect if you play it perfectly. If you lose Free Range in a tough situation or play too much Time Attack before youre ready, it can be frustrating. I cant emphasize enough that practice at both Time Attack and Normal Mode goes far in making the experience a fun one. The difficulty curve is a bit hard at the beginning but becomes comfortable as you master it. And I do mean comfort, not rote. Rote does not make your hands sweat like this.

If you enjoyed this Thunder Force V: Perfect System review, you're encouraged to discuss it with the author and with other members of the site's community. If you don't already have an HonestGamers account, you can sign up for one in a snap. Thank you for reading!

© 1998-2021 HonestGamers
None of the material contained within this site may be reproduced in any conceivable fashion without permission from the author(s) of said material. This site is not sponsored or endorsed by Nintendo, Sega, Sony, Microsoft, or any other such party. Thunder Force V: Perfect System is a registered trademark of its copyright holder. This site makes no claim to Thunder Force V: Perfect System, its characters, screenshots, artwork, music, or any intellectual property contained within. Opinions expressed on this site do not necessarily represent the opinion of site staff or sponsors. Staff and freelance reviews are typically written based on time spent with a retail review copy or review key for the game that is provided by its publisher.