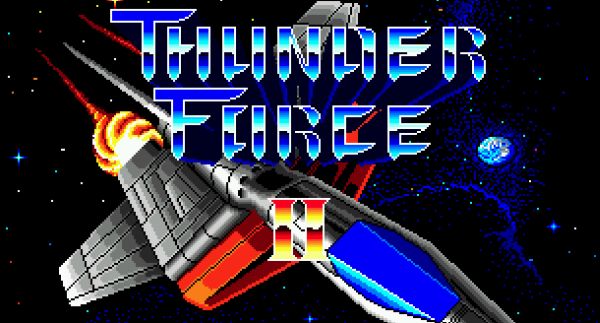 In an ideal world, I would start this Thunder Force II review by telling you about the industrial stage where you fly through the guts of a manufacturing plant, bypassing half constructed tanks and fighter craft stored on endless metallic shelves in the background. Here, blue steel girders lined with bullet-spitting turrets impede your progress while crab-like mecha surge on-screen to blast you with twin plasma cannons. Youre a weak little thing at this point, but by surviving the initial onslaught, series-relevant power ups dial up your arsenal. Timid straight lines of weak missiles or plasma blast shooting from your front and rear can be coupled with wave cannons that cover a larger area, or hunter beams that track targets down like heat-seekers. CLAW satellites can be obtained to orbit your ship, offering up slight laser barrages but, more importantly, deflecting blows for your flimsy craft that only needs a single hit to be destroyed.

Even in this early stage, what should be the training section of the title isnt shy about flooding the screen with bullets and bullying you into a corner. Get far enough in to feel like you have things on a even playing field, and the odds are reshuffled. Javelin-like missiles are periodically launched from off-screen with frightening pace, often paired up with slim blue laser discharges and quickly followed by pale yellow spacecraft that dwarf your own fighter. The architecture gets more and more claustrophobic, giving you less and less room to evade while sirens blare out in the background, bringing with them sticky blue orbs that fall from gaps in the ceiling and roll after you determinedly. Before you meet the end of level boss, the station makes one last desperate gambit to see you off, ushering you into an open room before filling the screen with missiles and lasers.

Then the boss hits. Its a large diamond shaped fighter with what starts out to be a simple attack pattern. On either wing sits two obvious cannons and, by staying in between these as they spit out serpentine blasts, you might think yourself pretty safe to chip away at its shields. Then a further two cannons slide out of its sides, nearer the nose. Then the nose itself regresses to make way for a huge fire-flinging cannon and then youve nowhere else to hide.

So you leave your once safe spot to weave about the screen, which is countered by a never-ending cascade of homing missiles. With the guns cooling, you might feel safe to sneak in front for a few attacks, and that when the boss decides to ram you, surging across the screen in an almost undodgeable burst of speed.

In an ideal word, it would be the start of a flowing review where edge-of-the-seat stages are the norm. I could tell you about the second stage that has you bombing through a ruined metropolis, razed buildings and crumbling cities as your backdrop and metallic tunnels rigged with booby-trapped shutters as your obstacles. Technically, I still can; these levels exist and can have nothing taken away from them. Should you escape the steel tunnels of the second stage, you fly through an area free of obstacles but filled with all manner of things that want you dead. Because theres little to crash into, you do this section at twice the speed as youd previously travelled, making reflex piloting your biggest concern and blowing stuff up a distant second.

Oh, Tenchosoft, why is there a But.

This is not an ideal world. Carried over from the previous game on the Sharp X1 are the overhead stages. These free-roaming sections drop you into an open-plan map then ask you to destroy a number of bases hidden out there somewhere. These pre-empt all the side scrolling levels, miring further progress in a quagmire of frustration and boredom. They are the equivalent of those anti-piracy adverts that appear at the start of most DVDs; just as unskipable, but equalling the length of the feature presentation.

The overhead stages arent hard, but they are clumsy and poorly implemented. The ship is always moving in one direction and one direction only -- forward. Theres no strafing to the side to avoid a bullet; you either have to turn to the side and fly off, or turn right around in a ridiculous attempt to run away from the projectile. Though there are flying targets to contend with, the bases you need destroy are stationary and, because you have no means of stopping, this puts you in a ludicrous dance of firing off a volley of bullets into it, turning round and retreating a few feet, then turning back again to attack a good dozen times before you can see it off. There are five bases per overhead stage. There are four overhead stages.

You dont even know where these stages are. The X68000 version came with a little map to help you, but the Mega Drive version dropped both that and two of the levels. One of them was another overhead stage, so its a sacrifice Im willing to take.

Ideally, I could end things on an high. The last scrolling section Thunder Force II showcases would make an ideal advert for the genre. The very start throws you headfirst into a early adaptation of bullet hell, as numerous turrets try to gun you down early before the stage has you reversing through sections of its maze-like interior (much like Xenon 2, but executed without the mind-numbing unfairness and without staying long enough to wear out its welcome). Other sections have you speeding recklessly through a rocky cave interior, dodging clumps of unforgiving rock or blowing through sections of destructible wall in a panicked attempt not to crash into any of the cluttered green walls that constantly surround you. The stage has multiple paths, laser barriers, angry jet-packed robots and not a single stretch of level where a rocket launcher, gun turret or hydraulic crusher hasnt been strategically placed to make your life hell.

The boss for this stage is a huge weapons platform. Smaller turrets can be destroyed, but its huge cache of cannons spit out streams of plasma that require pixel-perfect dodging to survive. Even then, the mythical weak spot is protected by a flickering electronic barrier. As soon as that goes down, it decides to add a crescendo of glowing red bullets to its attack then soaks up your offence like a sponge. It can go down -- it will go down -- and youre left with a huge sense of accomplishment. Youve just seen off one of the most intense stages youll ever find on any platform.

Then you do another overhead stage. Because ending this game on a high would be wrong.

Thunder Force II deserves to be neutered at the end. It deserves its awful conclusion and it deserves what it does fantastically right to be hidden away behind numerous bungles and dead wood. I cant think of anything more damning than to point out how it has, hidden in its depths, something so wonderful, but, in the same breath, advise you not to bother.

The ideal world is a pipedream. The majority of Thunder Force II is rotten.

If you enjoyed this Thunder Force II review, you're encouraged to discuss it with the author and with other members of the site's community. If you don't already have an HonestGamers account, you can sign up for one in a snap. Thank you for reading!

© 1998-2021 HonestGamers
None of the material contained within this site may be reproduced in any conceivable fashion without permission from the author(s) of said material. This site is not sponsored or endorsed by Nintendo, Sega, Sony, Microsoft, or any other such party. Thunder Force II is a registered trademark of its copyright holder. This site makes no claim to Thunder Force II, its characters, screenshots, artwork, music, or any intellectual property contained within. Opinions expressed on this site do not necessarily represent the opinion of site staff or sponsors. Staff and freelance reviews are typically written based on time spent with a retail review copy or review key for the game that is provided by its publisher.