"The experience is emotional. Thats something Ive never seen or heard of in a game."
-- Jimmy King

"...beyond the visceral emotional impact it had on me I have little else to say about it. Because the game only gives you one chance to play it makes it difficult to evaluate as a work or cultural artifact."
-- Eric Swain

An enraged man comes at you with a knife. Press the space bar to defend. Otherwise, die.

I didn't quote the above three bloggers to make them look foolish (although they do) -- I quoted them to show you that some people in this world really do think this silly Flash game is "something never seen before", "emotional", and "a cultural artifact".

You want to know what was never seen before? Grand Theft Auto III.

You want to know what's emotional? The challenging, heart-pounding boss battles from Ys: The Oath in Felghana.

You want to know what's a cultural artifact? Devil May Cry.

Was One Chance trying to directly compete with any of those games? Of course not . . . but when people ignore the history of gaming and make hyperbolic statements, absurd comparisons pop up. Unfortunately, these bloggers believe their hype. They believe that mass-market videogames aren't emotional or inventive. They spread their nonsense to a public that thrives on hype, and they whisper their serpentine words into the ears of developers at every opportunity. They encourage companies to "learn" from bad games by imitating them. As someone who enjoys videogames and wants to see them get even better, that's a crime.

Final Fight is a great videogame. Let's talk about One Chance.

It's a six-level game in which you walk from left to right. You cannot jump or express emotions via punches and piledrivers, but you get to make a decision by either pressing the space bar or not pressing it. This happens up to twice per level and influences the story. According to that story, you created the cure for cancer. This is a happy thing. On level two (day two), your cure is revealed to actually be a horrible cell-killing concoction that will destroy all life on Earth. This is a sad thing.

Day one:
Celebrate curing cancer, or work. If you don't work, you eventually lose.

Day two:
No choices. The enormity of your scientific blunder is symbolized by a newspaper article and by a dark-skinned figure intentionally falling off the edge of a rooftop. This is an homage to the cinematic tradition of always killing the black man first.

Day three:
Go home and have sex with your wife, or work. If you don't work, you eventually lose.

Day four:
Stay home, have sex with a coworker, or work. If you don't work, you eventually lose.

Day five:
The events of this day vary depending on previous actions. It still boils down to "work" or "don't work". If you don't work, you eventually lose. 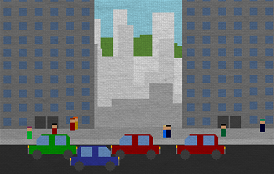 The game then ends, but it doesn't return to the title screen -- it just leaves you staring at the final image. You can never play again, because that's what One Chance means: you have one chance to play . . . unless you mess with the Flash player's default settings. Most endings result in your quiet death. A couple result in your violent death. And in the best ending, you manage to save yourself and your daughter as the rest of the world dies.

The "good" ending is meant to be sweet and touching, although it implies your daughter is condemned to an incestuous future as a baby-making machine. The "bad" endings are meant to make you reflect on what you could have done differently with your one chance.

One Chance's answer is "work hard every day". I understand that someone faced with the destruction of all life should strive to find a cure. Preservation of the species is pretty damn important. Hell, if I knew the world were ending, I wouldn't even go home to sleep. For some reason, One Chance's protagonist returns home every night after work. But forget that. To "win" the game, you have to work every single day, even on that very first day when you think you've successfully cured cancer. So the game is really teaching us to be good little sheep and never do anything fun for ourselves. One Chance thinks we should keep repeating the same routine over and over and over again, without ever taking time off to expand our minds by experiencing life. 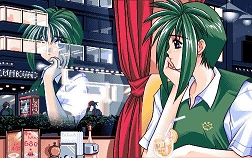 One Chance is a bad game for obvious reasons. The graphics are poor, the music is repetitive, the guy walks slowly, the story is silly, player interaction is minimal, and victory is achieved through repetition instead of mastery. Its claim to fame is that you only have one chance unless you game the system.

1986's excellent and highly-interactive Starflight was like that too, unless you were smart enough to make backups of your floppy disks. Thank goodness games don't do that anymore.

If you enjoyed this One Chance review, you're encouraged to discuss it with the author and with other members of the site's community. If you don't already have an HonestGamers account, you can sign up for one in a snap. Thank you for reading!

© 1998 - 2022 HonestGamers
None of the material contained within this site may be reproduced in any conceivable fashion without permission from the author(s) of said material. This site is not sponsored or endorsed by Nintendo, Sega, Sony, Microsoft, or any other such party. One Chance is a registered trademark of its copyright holder. This site makes no claim to One Chance, its characters, screenshots, artwork, music, or any intellectual property contained within. Opinions expressed on this site do not necessarily represent the opinion of site staff or sponsors. Staff and freelance reviews are typically written based on time spent with a retail review copy or review key for the game that is provided by its publisher.