Gunstar Heroes was always slick, but was never going to be a Contra-killer (if any game is the run-and-gun standard, its Contra -- that's just fact). With bright and colourful and decidedly anime-styled graphics, GH was instantly appealing upon its release. The folks at Treasure like to do special, and GH is definitely that, but while it undoubtedly succeeds at spicing things up in a simplistic genre, it fails to implement many fundamental conventions, and ultimately feels like a missed opportunity to truly reach greatness.

Your mission is straightforward enough: As one of the two Heroes -- twin brother Red or Blue -- you must foil the nefarious Colonel Red (the doppelganger of Street Fighter IIs M. Bison) who has stolen the four Mystic Gems in a plot to unleash the all-powerful Golden Silver -- and youll want to release your brainwashed older brother Green and rescue hopeless ally Yellow along the way. Taking a friend along for the ride makes GH a lot more fun and frantic. This is true of any game, certainly, but GHs strength is its frenetic pace and two Heroes playing simultaneously can manifest madness on the screen.

You can fire in eight directions, and have a choice between fixed and shooting-while-moving options, which is a bit silly, because the fixed variation is a terrible selection, and once its made, youre stuck with it for the rest of your playthrough (fixed makes you a static target in a very fast game -- not good). Anyway, you then choose one of the four colour-coded weapons as your default: the orange flamethrower, the blue laser, the green homing gun, and the yellow standard issue pea-shooter. 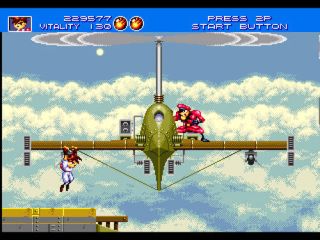 So youve made your shooting option and weapon choices, and youve selected one of the four levels on offer from the opening: its time for action! Youre happy enough running and blasting with your green homing gun when you come upon a robot bird. Heres where things get interesting: shooting that bird will cause it to drop another weapon icon, enabling you to carry two onboard blasters at a time. You can have blue and green, for instance, and can switch between the two as the situation demands. Better still, you can combine the two colours to make a third weapon choice! This allows for a lot of mix and matching and presents the exciting illusion of a deep weapon system.

I call it an illusion because what youll find out almost right away though, is that nothing beats mixing blue with green: its a homing laser beam that chases out and harries the closest target to death -- a veritable boss annihilator. The only other combination I ever used with similarly successful results was green with green, which effected better homing intelligence if less actual stopping power.

Besides the guns, GHs injected more wow factor into the run-and-gun archetype with its beat-em-up elements -- inclusions that were unheard of in this type of game. The option to jump kick, slide kick and throw enemies (into each other, no less!) seemed to elevate a generic, if stylish blaster to extraordinary genre-smashing heights. 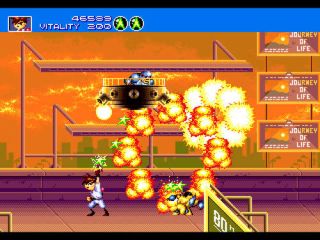 If only the levels and enemies were more consistently inspired! Enemy soldiers do cool things like block your slide attack and throw you, but theyre all boring palette swapped grunts. Some interesting and unique enemies outside of the bosses would have been welcome. The bosses themselves are a solid group, by comparison, with the notable exceptions of ruins level mech, Pinky Roader, who is extremely lame; and the underground mine level transformer, Seven Force, who is extremely awesome. The latter changes from a giant gun, to a sprinting soldier, to a leaping tiger, to name a few -- each form confounding you with a different pattern to figure out.


The four levels selectable from the onset vary wildly in theme: from an underground mine cart stage to an actual board game with dice deciding which set of enemies you take on next. What they all have in common; however, is that they seem overly long without much variation in level geography to keep your interest. Whereas old favourite, Contra, began with a stage where there were chasms to negotiate and a multi-levelled playing field, GHs first selectable level is just a flat run through the grass. Just keep jump kicking frantically forward and shooting forward and diagonally-forward--and after a time, youll reach the boss. Set the homing gun on the target and do a modicum of dodging, and onward you go.

Contra had a level where you climb a waterfall, leaping from rocky platform to rocky platform; avoiding troops, gun turrets, and bullets. GHs similar level has you climbing a scaffolding alongside a rocket ship, which sounds cool, but really isnt, because you just keep left and keep jumping directly upward, while tapping the fire button on occasion. 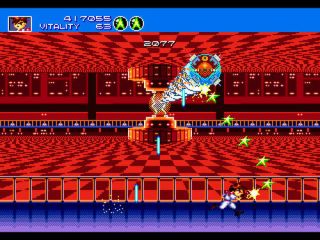 The bland level design sets off a chain reaction of negatives which has been slightly tempered in this new version. Rudimentary stage structure doesnt lend itself to replays. And since having no checkpoints and only one life (albeit with a numeric vitality bar) encourages retreads, dying places a crippling strain on any fun you might have been able to have with the game. Its not that GH is inordinately difficult; but most of the games bosses are of the multiple form variety -- which is admittedly awesome -- and so dying trying to figure out form 2s pattern and being sent back to the beginning of the stage, is decidedly un-awesome.

Therefore, its pretty ironic that, as inherently imperfect as emulations are, this PSN version provides saved states so that we can save anytime along the way, and mitigate the Genesis originals checkpoint failings. As such, I like this downloadable title quite a bit more than I liked the game when it first came along in the nineties. But because of its numerous shortcomings, and in spite of all its undeniable coolness, I still dont love it.

If you enjoyed this Gunstar Heroes review, you're encouraged to discuss it with the author and with other members of the site's community. If you don't already have an HonestGamers account, you can sign up for one in a snap. Thank you for reading!

© 1998-2021 HonestGamers
None of the material contained within this site may be reproduced in any conceivable fashion without permission from the author(s) of said material. This site is not sponsored or endorsed by Nintendo, Sega, Sony, Microsoft, or any other such party. Gunstar Heroes is a registered trademark of its copyright holder. This site makes no claim to Gunstar Heroes, its characters, screenshots, artwork, music, or any intellectual property contained within. Opinions expressed on this site do not necessarily represent the opinion of site staff or sponsors. Staff and freelance reviews are typically written based on time spent with a retail review copy or review key for the game that is provided by its publisher.