"Knight. Gabriel Knight. In case someone wants to know."

Whether in the role of silver-tongued conman or paranormal investigator, Gabriel Knight is definitely someone you'll want to know; his career might have begun just as the entire adventure genre was taking those first, faltering steps on its slow descent into irrelevance, but Sins of the Fathers masterfully demonstrates why Sierra On-Line once drove the computer industry.

It's certainly their most mature effort, not in the sense of the Leisure Suit Larry series and their lust-crazed humor, but with a complex set of challenges and equally intricate plot that unfolds over the course of ten chapters for a strong, structured narrative. Our hero owns the seldom patronized St. George's bookshop in addition to a considerably more trafficked bedroom, but it's in search of killer material for what's supposed to be his breakout novel that Knight becomes mixed up in the so-called "Voodoo Murders," a series of gruesome slayings terrifying the citizens of New Orleans in which the victims are found surrounded by ritualistic trappings and their hearts are never found at all. Poking your nose everywhere from creepy museums to bloody crime scenes unveils an amazing wealth of true history and colorful folklore that breathes incredible detail into the setting, be it wild tales of voodoo queen Marie Laveau or the far less theatrical but no less compelling African roots of vodun; once the curtain is pulled back too far, however, Gabriel stumbles into a twisted web of supernatural horrors and undying hatreds that have entangled his bloodline for countless generations. When the police blame the ensuing carnage on "the underworld," it's a shame they have no inkling of how close to the truth they really are. 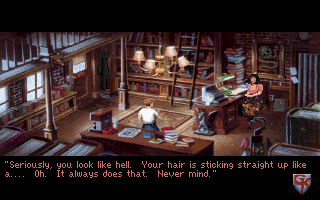 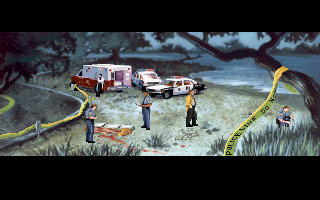 Despite his name, Gabriel is no angel himself; he's actually kind of a bastard. Sly and manipulative, our hero thinks nothing of flouting the law to get what he wants, and frequently slips past obstacles with either his slippery charm or outright trickery, a marked difference from the typical point & click protagonist who's supposed to be noble and pure but nonetheless swipes everything that isn't nailed down (unless he has a crowbar). Our hero also comes equipped with the libido of an incubus on Viagra (or to hear him tell it, "tragic poet-samurai" appeal), much to the eternal vexation of his repressed assistant Grace Nakamura, yet Gabriel comes off as a rather likeable son of a bitch thanks to easily flowing banter between a cast of characters as smart as they are smart-assed.

"So. What's new, Grace?"
"Your use of mathematics, for one thing. These books are unbelievable."
"What can I say? I refuse to be bound by rules."
"The strap-marks on your bedpost speak otherwise."

Even by today's significantly higher standards the voice acting is astoundingly lavish, shaming many of the titles being released right now with its star-studded cast headed by Tim Curry and a "Southern" accent so deep that it practically oozes testosterone. Considering that the supporting crew includes Mark Hamill, Leah Remini, Michael Dorn, and Efrem Zimbalist Jr., it's a good thing there's a veritable forest of script to go around; dialogue is handled via a sprawling tree of all the topics you've encountered thus far with new subjects constantly being added  an offhand comment made by a shifty storekeep may lead to important revelations when posed to one of your previous contacts  as well as learning about their backgrounds and motivations, making even comparatively minor characters feel like believable people. Naturally the top-notch casting is suitably accompanied by a powerful, haunting score written for power users who had access to pricey General MIDI, but that goes without saying; this is a Sierra game.

The brooding graphics, however, are perhaps the most detailed aspect, as practically everything depicted on each screen can be examined, always with its own unique, frequently wry description even if most are ultimately there just for color. On the first screen alone you can just muck about for several minutes, among other things 

1.) Boning up on your German language skills in case you should find yourself being stalked by lycanthropes in the mountains of Bavaria, or maybe just so you can comment on your pal Mosely's "drachen breath" with impunity.

2.) Popping open the cash register to examine the take, "or in the case of St. George's Books, the MIS-take."

3.) Once again using the ladder resting against the towering shelves to peer down Grace's shirt and "refresh your memory." ("I know what you're trying to refresh, and it isn't your memory. Get down.") 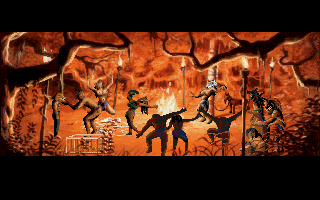 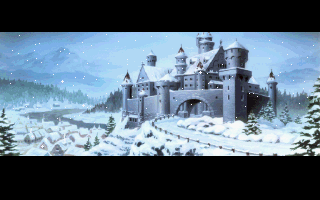 The trick is that many seemingly innocuous objects or events later turn out to have been important clues, so carefully combing through your surroundings often pays serious dividends when you eventually reach the appropriate puzzles and recall some bit of pertinent information; the levels of subtlety may vary, but seldom does a solution just spring out from the ether. And even as its contemporaries' interfaces were becoming simpler, this one expands the generic "hand" icon for interacting with a hotspot into four highly specific actions: adding the subject to your inventory, of course, but also opening, operating, or moving it. This isn't merely to make things more complicated, as objects can have multiple uses; upon discovering an antique clock that once belonged to Gabriel's grandfather, you might wind it up, but you could also try playing with the hands instead  or maybe you just wanted to shove it aside so you can check out the dusty trunk it's currently sitting on. Throw in a large number of optional points that aren't necessary to complete the game but further illuminate the plot along with two endings and you have a rare graphic adventure that actually stands up to repeated playthroughs. Sierra even restrained that almost malicious penchant for constantly killing off their protagonists if they so much as put a foot wrong; there are only a few ways to die, all of which are towards the conclusion, but they certainly do follow the company's trademark revelry in doing so with sudden, shocking violence.

Had it been released in the glory days, an adventure game of this caliber would have spawned another lengthy franchise, but our hero's two future installments would instead find their cinematic strengths sorely tested by the terrible gimmicks of their respective eras; only one would succeed. The original, however, personifies everything that the genre should and can be  whatever the fate of its successors and their still uncertain future, Sins of the Fathers has nothing to be forgiven for.

If you enjoyed this Gabriel Knight: Sins of the Fathers review, you're encouraged to discuss it with the author and with other members of the site's community. If you don't already have an HonestGamers account, you can sign up for one in a snap. Thank you for reading!

© 1998-2021 HonestGamers
None of the material contained within this site may be reproduced in any conceivable fashion without permission from the author(s) of said material. This site is not sponsored or endorsed by Nintendo, Sega, Sony, Microsoft, or any other such party. Gabriel Knight: Sins of the Fathers is a registered trademark of its copyright holder. This site makes no claim to Gabriel Knight: Sins of the Fathers, its characters, screenshots, artwork, music, or any intellectual property contained within. Opinions expressed on this site do not necessarily represent the opinion of site staff or sponsors. Staff and freelance reviews are typically written based on time spent with a retail review copy or review key for the game that is provided by its publisher.