Sci-fi has a small laundry list of get-out-of-jail-free-cards they can endlessly recycle to provide quick and easy explanations for whatever crazy plot device theyre currently trying to sell you. Anti-matter and tachyon particles and reversing polarity all list pretty highly, but the modern day favourite is nanotechnology. Want to advance some soft-sci-fi shenanigans? The nanos did it! Those pesky microscopic robots; theyre the cause -- and solution -- for anything that ever happened in Star Trek: Voyager.

Tasty Planet: Back for Seconds may as well be the revenge tale for their shoddy treatment.

The game itself is the story about a little blob of nanotechnology that exists only to assimilate anything small enough for it to absorb. Early levels see it devouring small chocolates before overwhelming the lab it was devised in, and chewing up lab rats, scientific equipment and the odd pet cat. You guide the blob around with the arrow keys or the mouse and it slides around happily, causing mayhem and panicking the scientists responsible for its construction. Each item it digests makes it bigger and bigger, allowing it to move up to more sizeable snacks. As such, the game follows a set pattern. Eat little stuff: evolve. Eat bigger stuff: evolve. Eat huge stuff: evolve. 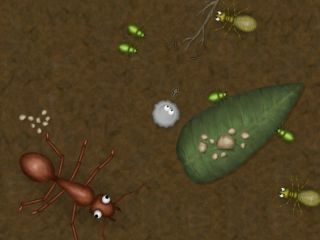 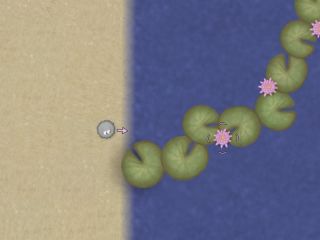 This could lead to a repetitive cycle. No, actually, this does lead to a repetitive cycle; theres no getting away from that, but the process is saved by a lot of clever level design. Not content to hang around in a sterile lab all day, the blob obtains the means to travel to different time periods and eat large chunks of them instead. The Jurassic age has him start out munching on small rocks and trying to avoid the attention of bigger predators that can, in turn, take bites out of him. Revenge is never too far away: with a glutinous attitude, the blob will soon grow.

While some stages are open plan settings that allow you free roam, getting to a bigger size will allow the camera to pull back, revealing more of the level and larger objects to devour. It means, in one sitting, you can go from eating M&Ms to giant computers, from eating ants and grasshoppers to volcanoes, and dewdrops to galaxies. Some, though, offer set objectives. You could find yourself trapped in a boneyard maze, having to nibble away at the smaller bones and open up new passageways in an attempt to evolve enough to get rid of the bigger obstacles. Other stages dump you in the middle of a cattle stampede, where youll have to avoid rampaging bovines while trying to eat the debris they trample underfoot or defend siege weapons from attacking Romans. You have ulterior motives, though; you just want to eat enough soldiers until youre big enough to snack on the weapons you protect. 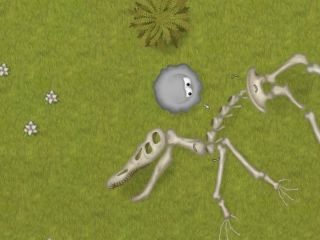 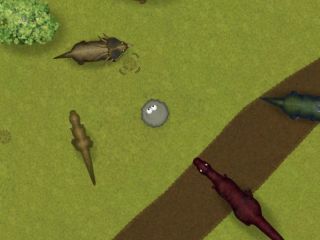 Theres a cleverness in the level design that helps extend the games brief lifespan, given a further boost by a few differing game modes and a medal system awarded to players who complete stages in a quick time. Without becoming too abstract and critical, if the simplest question possible was asked of me -- did I enjoy my time with Tasty Planet: Back for Seconds -- the simple answer would be yes.

If you enjoyed this Tasty Planet: Back for Seconds review, you're encouraged to discuss it with the author and with other members of the site's community. If you don't already have an HonestGamers account, you can sign up for one in a snap. Thank you for reading!

© 1998-2021 HonestGamers
None of the material contained within this site may be reproduced in any conceivable fashion without permission from the author(s) of said material. This site is not sponsored or endorsed by Nintendo, Sega, Sony, Microsoft, or any other such party. Tasty Planet: Back for Seconds is a registered trademark of its copyright holder. This site makes no claim to Tasty Planet: Back for Seconds, its characters, screenshots, artwork, music, or any intellectual property contained within. Opinions expressed on this site do not necessarily represent the opinion of site staff or sponsors. Staff and freelance reviews are typically written based on time spent with a retail review copy or review key for the game that is provided by its publisher.