Samurai Shodown Sen is not an awful game. The only way it could be considered "awful" would be to ignore the barely playable fighters that have come out over the last twenty years. The characters perform expected actions whenever I press the buttons, and -- aside from plastic doll faces -- the graphics are well beyond "PlayStation 2 quality". I can say this with confidence because I've actually played PS2 games. Sure, the static stage design and straightforward presentation may not compare favorably to the Dreamcast's Soul Calibur or Dead or Alive 2, but those were that era's Uncharted 2. The point is, it's obviously an Xbox 360 game and it's obviously not an awful one.

That being said, Samurai Shodown Sen is not a good game, either. There actually seems to be some variety in character styles, but I can only see people enjoying it at parties, and only if they party with nerds who have nothing better to play (and by definition, nerds should have far better games to play). I thought it was occasionally silly and mostly dull.

Case in point: Kyoshiro. According to the opening narration, he "believed that his duty in life was to spread the joys of kabuki around the world."

So he went forth and chopped off peoples' heads.

One of the epilogues relays the tale of Chinese warrior Wan Fu, who kills a bear for its liver, then wraps a chain around his body and leaps into the ocean to attract a shark so he can get across the ocean quickly. But the shark must first be tamed!

"After exchanging fists, the shark let me ride on its back."

That's some shark! I really wish I had a picture to go along with that epilogue, but each character's unique ending has no illustrations. That's important because it means the only incentive to play through the single-player mode is to unlock the bosses as playable characters . . . and to unlock both bosses, you must beat the game with everyone.

Although some people play SNK fighters for the story, most are more interested in the fighting. Samurai Shodown Sen is not unplayable, but it's designed for degenerates. When I played as the runaway princess Suzu, I found that victory was easy to attain by abusing the triple slash (hold back + vertical slash) and difficult to attain by playing "honestly". When I selected Haohmaru, I abused his throw. Actually, aside from Suzu, I abused everyone's throw. I beat the game with every character, and I improved my blocking-and-countering, but I don't feel like I really learned how to play the game.

The frightening thought lingering in the back of my head is that perhaps I actually did discover the best way to play. My "strategy" worked even on the harder difficulty setting.

When reviewing a fighting game, I would normally name or describe some of the characters. In Samurai Shodown Sen, they all use the same throw animation, so they're all the same to me, except that some wear skirts and some wear baggy pants.

Wait -- there's one character who stands apart from the rest. Her name is Angelica, and she's a leggy Amazon. She's unusual because her "throw" is inexplicably weak. She must throw people six times to win, whereas other characters must only throw people five times. After scouring the internet, I actually found a tier list for Samurai Shodown Sen, and Angelica was considered the worst character. But I still like her, because she's pretty hot. 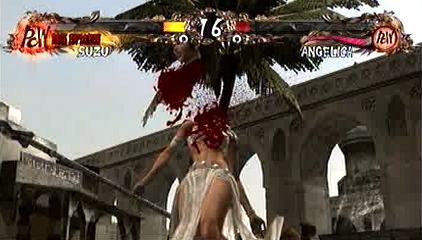 Oh crap. Did I just do that?

Creating a balanced but challenging fighter requires an enormous amount of planning, testing, and time. That obviously didn't happen here; Suzu's triple slash, Wan Fu's knockdown-and-keepdown combos, and every character's "throw" could have been caught simply by playing against the computer. And then they should have been fixed. Finding these things doesn't help if they aren't corrected.

Playing against other people might be fun if other people actually played Samurai Shodown Sen, but they don't. I can't recommend a broken single-player experience or a multiplayer game that lacks a competitive community. My best memory of Samurai Shodown Sen was when I paused during Charlotte's stage and listened to the music for a while; that's not worth $20.

If you enjoyed this Samurai Shodown Sen review, you're encouraged to discuss it with the author and with other members of the site's community. If you don't already have an HonestGamers account, you can sign up for one in a snap. Thank you for reading!

© 1998-2021 HonestGamers
None of the material contained within this site may be reproduced in any conceivable fashion without permission from the author(s) of said material. This site is not sponsored or endorsed by Nintendo, Sega, Sony, Microsoft, or any other such party. Samurai Shodown Sen is a registered trademark of its copyright holder. This site makes no claim to Samurai Shodown Sen, its characters, screenshots, artwork, music, or any intellectual property contained within. Opinions expressed on this site do not necessarily represent the opinion of site staff or sponsors. Staff and freelance reviews are typically written based on time spent with a retail review copy or review key for the game that is provided by its publisher.