Sometimes, all that you need to take a mediocre game and transform it into a colorful, lively romp through time and space is a cast of memorable characters. Take Disgaea, for instance. On its own merits, that title wasn't the perfect dungeon crawler, but once zany personalities such as Laharl and Etna were tossed into the mix, it became an entirely different monster. Trinity Universe, NIS's latest offering, is a hodgepodge of that same brand of silliness and rambunctious dialog that has successfully transformed the company's past efforts into such memorable affairs. Equal parts crazy-for-the-sake-of-crazy and rote grinding, Trinity Universe isn't the most original offering, but it makes up for any shortcomings with endless charm and hilarious (if not always intentionally so) dialog.

As they begin playing and find themselves bombarded with bottomless dungeons, over-the-top character upgrades and a weak but personable central narrative, gamers are tasked with traversing the Netheruniverse, a mythical "black hole" where lost items drift endlessly through space. The nearby land of Empyria is threatened by strange objects that are falling from said Netheruniverse. Its inhabitants must scramble to protect their homes and themselves. 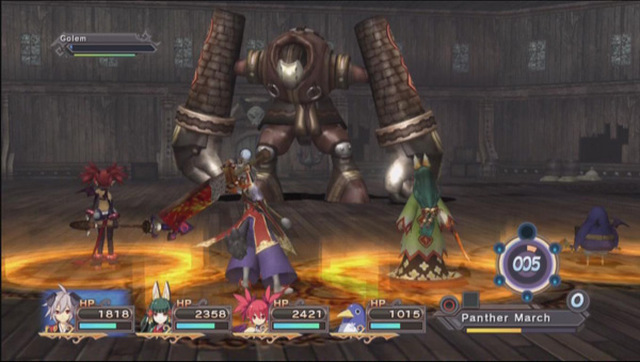 Players initially meet up with the demon dog Kanata and the valkyrie Rizelia, both on the run after Kanata skipped out on an ancient ritual that was intended to turn him into a gem with the power to save the world. This duo's likable chemistry sets the stage for what inevitably becomes an exercise in outrageousness and conflict, what with Kanata's dimwitted ways and Rizelia's more restrained, common-sense outlook on life. Kanata is idealistic, ready to protect his homeland from falling pieces of sushi, TVs, and other intergalactic bric-a-brac without thinking too much of the dangers or implications of such brazen courage. Rizelia urges Kanata to stop and think about what's going on before mindlessly jumping to action.

Those two characters are only a taste of what's to come in Trinity Universe, however. Eventually, the larger cast comes into play. The tale is laced with appearances from Flonne, Etna and Prinny of Disgaea fame, as well as guests from the Atelier series. Each new acquaintance leaps into the narrative with his or her own motivation for keeping Empyria safe. Etna is on a mission to seek out the most delicious dessert known to man, for instance, while alchemist Violet simply wants to create new items. Together the unlikely allies work to combat the mysterious falling items in an admittedly inane storybook adventure that will have you giggling at hilarious one-liners throughout. 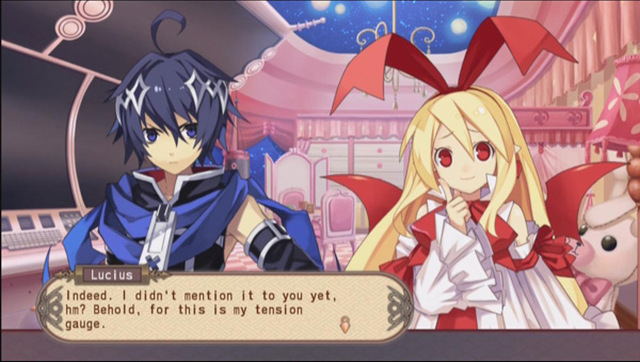 Most of the peculiar drifting items found in the Netheruniverse are actually dungeons that you can access from the game's central menu. As you enter strange floating items, you're plunged into a new dungeon-crawling quest in an effort to send these potentially dangerous curios back to the place from whence they came. By destroying the gravity core central to each item, you're doing your part to keep Empyria safe from the downpour of coma-inducing rain that otherwise could fall at any moment. Things look dire indeed for the citizens of Empyria, but as the player who must enter school buses, donuts, traffic cones, and similarly randomized items, it's tough not to be amused by the absurdity that plays out on-screen.

Unfortunately, the interiors of such dungeons don't always match their intriguing exteriors. Most of the time you're doomed to searching ruins, ships, and other areas of non-interest, which is disappointing considering the nature of the items that you actually find in the Netheruniverse. Oftentimes new quests simply mean that you must return to the same few dungeons that you've already explored, now with "new" areas that feature no changes other than longer hallways or a different twist here or there. Despite the good-natured and likable characters and dialog that make Trinity Universe memorable, the dungeon crawling (which is the game's main entree) can feel fairly boring and uninspired. Your objectives, stretched thin across side missions and the flimsy narrative, generally involve finding the few treasures locked within each item, defeating the monsters within and eventually using the gravity core to send said item away. This process becomes hackneyed very quickly, as performing the same few tasks repeatedly can wear on the nerves.

You'll spend most of your time battling the seemingly thousands of monsters that inhabit each item. Your characters are provided with a set number of battle points based on gear equipped, and you must use those limited resources to string together attacks and abilities that will hopefully inflict serious damage on your enemies. There are different combinations with which to decimate those who would stand in your way, and the ones that are available change depending on the party member party member you use. If you chain attacks together correctly, you can trigger EX attacks that are essentially limit breaks and special moves. Unfortunately, since this system relies on strategically placed attack chains and forces the player to use the same monotonous moves over and over, you'll find yourself slogging through battles with a groan as you beef yourself up to a point that allows you to unleash the bigger moves that your incredibly weak gear typically prevents you from appreciating. You'll access to new and more varied gear as the game progresses, but the experience as a whole would be easier to enjoy if the battles themselves were more inspired. 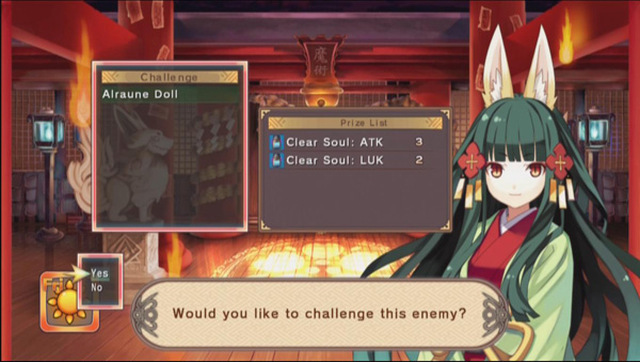 If the battles are somewhat dull, though, at least the wealth of customization options available serves as an acceptable cure. There are four methods of enhancement that you can employ to improve your party and to make the grind a bit more palatable. Through item synthesis, the crafting of meteorites (special stones that you may use to slot abilities in) and the creation of monsters to battle and raise stats against, you'll find that there are plenty of resources available to aid you as you complete each dungeon at a much more expeditious pace than initially seems possible. You can also rely on enhancements known as Managraphics, which imbue your weapons with different abilities and give you the option to gain mana from enemies. These are all interesting twists on regular turn-based gameplay and they ensure that the overall experience is more lively than early battles might lead you to believe.

Story events also ensure that things remain lively. They are comprised mainly of dialog between main characters. Shifting character portraits and fantastically-voiced dialog keep things interesting as the story winds its way through situations that sometimes seem to exist for the sole purpose of allowing the effervescent main personalities to play off each other. Besides that, the crisp anime cutscenes (and even the stage selection menu) are aided by impossibly cute Japanese pop music that plays throughout your adventure. The switch to three-dimensional dungeon graphics once story segments can be jarring as a result, since the dungeons don't look as great as the anime visuals do, but even then the experience remains acceptably slick and polished.

Trinity Universe's main narrative arc can be completed in as little as 20 hours, but if you want to get to the bottom of things, including the reasons behind the Netheruniverse's existence and the motivations for each of the central characters, you'll need to invest far more time. Given the amount of exploration that is required just to complete the main storyline, it's a shame that the game expects you to complete numerous side quests and obscure missions in order to see the "true" ending. The jabs at NIS games, the hilarious one-liners and some unique rewards for grinding certainly aren't offered in other similar titles, though, so at least you can look forward to a fun, boisterous ride along the way. You'll have a much better time if you focus on the game's quirky charm instead of the overall goal that you're trying to reach. Approach it while in the right frame of mind and Trinity Universe offers a fun time both for NIS fans and for those gamers who can't get enough dungeon crawling. Just be prepared to work at it for awhile.

If you enjoyed this Trinity Universe review, you're encouraged to discuss it with the author and with other members of the site's community. If you don't already have an HonestGamers account, you can sign up for one in a snap. Thank you for reading!

© 1998-2021 HonestGamers
None of the material contained within this site may be reproduced in any conceivable fashion without permission from the author(s) of said material. This site is not sponsored or endorsed by Nintendo, Sega, Sony, Microsoft, or any other such party. Trinity Universe is a registered trademark of its copyright holder. This site makes no claim to Trinity Universe, its characters, screenshots, artwork, music, or any intellectual property contained within. Opinions expressed on this site do not necessarily represent the opinion of site staff or sponsors. Staff and freelance reviews are typically written based on time spent with a retail review copy or review key for the game that is provided by its publisher.