People were very sad when Working Designs closed their doors a while ago, but thats only because they didnt really know better. Though the publisher got a favourable rep for porting Japanese games that probably wouldnt have seen the outside of the Orient otherwise, they were allergic to future proofing and sometimes held the odd attitude that they were better writers than the original authors. Theyd fill their translations with pop culture nonsense that would be obsolete in a handful of years and overwrite the pre-established personalities of cast members because they knew better. You love them mainly because they excelled when they brought you the Lunar series. And then brought it to you again over the span of several platforms while you thanked them for it like fools.

Im more wary of them because of their shoddy treatment of almost anything SEGA Saturn bound and, especially, the potential damage they caused Shining Wisdom.

Before the baulking begins, its only fair to note that I sidestepped their stupidity on this issue. Working Designs did such a bad job with Shining Wisdom that SEGA refused to give them the copyright to the characters they inevitably messed up. When Wisdom hit Europe a little later than the NTSC version, it was retranslated by the folks at SEGA Europe. It meant we got a few typos and odd phrases here and there, but we also got the game as it was meant to be seen. Not some half-hearted after school special. Outside the translation drama, Wisdom already had an interesting history behind it. Set to be one of the last big hurrahs for the Mega Drive before SEGA prematurely pulled the plug on the 16bit era, it might very well have been the Drives definitive reply to Nintendos Zelda series. It does share a lot of traits; its an action-adventure viewed from a slanted overhead perspective that has the hero, Mars, often delve into dungeons to collect special items and defeat lurking bosses hiding inside. Where it did differ from everything else is how Mars offence could be radically altered with certain combinations of orbs and items.

With its originally intended platform neutered, Sonic! started work on making it a SEGA Saturn game. Most of the foundations for the earlier console build remained the same, giving it a dated, simple look, but an ugly 3D introduction scene was shoehorned in out of shamed obligation. This introduced Pazort, an evil wizard once under the employ of Zeon. 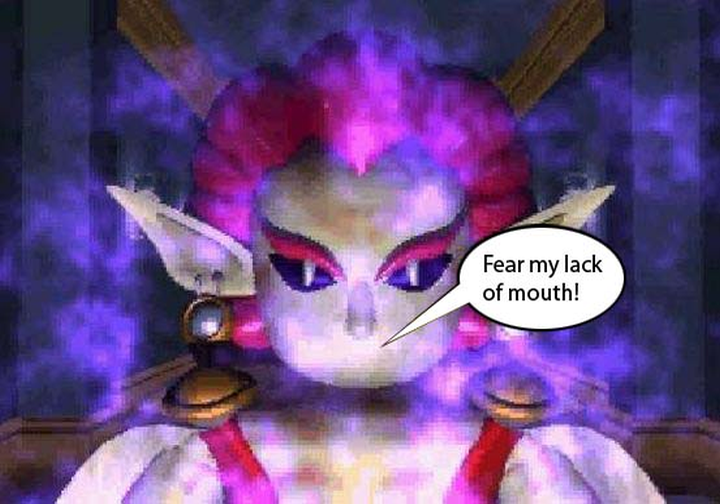 Zeon, I hear some of you say. Why, wasnt he the villain of Shining Force II? Indeed he was, my sharp-minded chum. Wisdom is, in many ways, the sequel to the second Force game, set in the same Kingdom of Parmecia only a few years after its conclusion. Mars is new to the series, but is quickly joined in his quest by Sarah and Kazin who came from the many ranks of Force II. Former protagonist, Bowie, is referenced frequently, and sharp-eyed gamers will even find mention of Thornwood, the tiny, tiny kingdom featured in Shining in the Darkness.

Continuity?, asked a puzzled Working Designs translator. Not on my watch!

Parmecia became Palacia, Zeon became Zhaion, Sarah became Salah and Kazin, Parn. The clumsy affection Kazin held for Sarah was unrequited, leading for several comedic moments of Sarah rebuffing his numerous advances and a few moments of touching clarity as the girl battled to keep the harm to her friends feelings as minimal as possible. This relationship gives them an underplaying sense of personality and purpose. Sarah wants to stop the evil she thought destroyed in her last battle, but Kazin desperately wants to protect the girl he loves, even if its dooming himself to a broken heart. Salah and Parn are just another couple going on a whacky adventure together.

Mars, though, is still the orphan of a war hero slain defending his kingdom from a dragon, whatever version you decide to play, and Wisdom still has a lot to recommend. In theory, the games map is presented in its entirety very early in the game, but you still need explore thoroughly to find ways to progress. Finding the Mole Claws lets you burrow under mounds of earth, while the Stone Boots let you break sections of floor to plummet from -- in the name of exploration! What helps these items stand out all the more is how they can be effected further by equipping elemental orbs. Equip a fire orb then stomp around in your boots, and you lay a trail of blossoming mushroom clouds that cause literal carbon footprints, while the heady combo of freeze orb/Shining Sword allows you to flick shafts of ice across the screen for kicks and giggles. Despite Working Designs best efforts, a lot of the Shining staples are present throughout, thanks to consumable items like Angels Wings teleporting you outside of dungeons, but their version of the title could be charitably labelled gutless in comparison. They took a series that still has a cult following today (despite the awful Ys-like Shining games stubbornly hurled at a market still sneering) and did their best to rob it of as much worth as they could. The commendable heart of a solid action game beats strong behind the scenes of a limp world, cardboard characters and groanworthy dialogue thought dry back in 1996 when it last held relevance. If this is the only version available to you, youre all the poorer for it.

Its with a twisted sense of gain that I grin during playthroughs of my PAL version of Shining Wisdom. Its a small victory that the copy I play hasnt declared genocide on its roots and had a translation borne of love rather than profession. Mars was meant to be the new star of the Shining world, and a figure carrying on from a title so grand that many people still consider it the genre benchmark, and for a minority, that still holds true. For everyone else, Shining Wisdom is the ugly side to Working Designs otherwise commendable refitting of unimported Japanese software; perhaps one tainted by an unfortunate period where they started to believe their own hype.

If you enjoyed this Shining Wisdom review, you're encouraged to discuss it with the author and with other members of the site's community. If you don't already have an HonestGamers account, you can sign up for one in a snap. Thank you for reading!

© 1998-2021 HonestGamers
None of the material contained within this site may be reproduced in any conceivable fashion without permission from the author(s) of said material. This site is not sponsored or endorsed by Nintendo, Sega, Sony, Microsoft, or any other such party. Shining Wisdom is a registered trademark of its copyright holder. This site makes no claim to Shining Wisdom, its characters, screenshots, artwork, music, or any intellectual property contained within. Opinions expressed on this site do not necessarily represent the opinion of site staff or sponsors. Staff and freelance reviews are typically written based on time spent with a retail review copy or review key for the game that is provided by its publisher.