Theres an unspoken law in reviewing that each piece needs to be over X number of words to gain creditability. Its understandable for the most part; I doubt Id be able to impress my disappointment or elation in numerous titles with only a handfull of lines, but, sometimes, its a hindrance. Sometimes, Im stuck fooling the reader with a roundabout introduction designed for no other reason than to pad for length. Hey, its not my fault youd dismiss this review as unreliable if I was to simply say Get to tha Choppa is a shallow point-rush game with the depth and cosmetic values of a simple flash game, slap a 3/10 on it, and call it a day.

Get to tha Choppa has precious little to do with Arnie pre-politics and more to do with the zombie apocalypse, timed button presses and a sadistic helicopter pilot. Backdropped to an odd techno song about someones proficiency in a ring, you control a faceless unfortunate chased rather swiftly by hordes of flesh-eating zombies. Your salvation? The helicopter keeping perfect pace with you. The problem? The pilot is clearly enjoying your plight a bit more than he should. 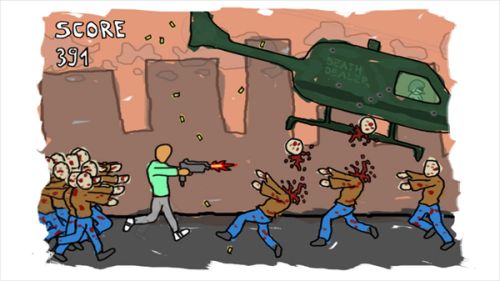 This means your chance of salvation is zero and, instead, allows you to switch focus from surviving to grabbing up as many points as you can before you fall. Your futile dash aimed to prolong your life is hindered by three main obstacles: arbitrary landmines you need to leap over, zombies running right at you that you need to gun down, and the odd missile the copter pilot will fire at you (he wants you to think its at the sprinting horde on your heels -- dont let him fool you!) that youll need to duck under. Leisurely at first, the pace will slowly pick up until you need to mash the corresponding buttons with split-second timing in order to leap the mines, duck under a missile the second you land, then pop back up firing. At these speeds, the games as involving as it gets, and a respectable survival streak does feel like an accomplishment. Then you do it again. And again. And again.

Get to tha Choppas charm lies in its shallow simplicity, but therein lies its biggest fault, too. The lack of depth will soon give the player little to look forward to but the droning actions theyve undertaken uncountable times before. The graphics share the positive traits of a childs lemonade stand with some of the letters drawn backwards; its a simplicity that quickly wears out its welcome as the cynicism sets in. Compared to the upper echelons of XBLIs titles, even the purchase price of a dollar can feel like too much to ask for.

Why? Because Get to tha Choppa is a shallow point-rush game with the depth and cosmetic values of a simple flash game Now Ive expanded more words than I needed to, I can slap a 3/10 on it, and call it a day.

If you enjoyed this Get to tha Choppa!!1 review, you're encouraged to discuss it with the author and with other members of the site's community. If you don't already have an HonestGamers account, you can sign up for one in a snap. Thank you for reading!

© 1998 - 2022 HonestGamers
None of the material contained within this site may be reproduced in any conceivable fashion without permission from the author(s) of said material. This site is not sponsored or endorsed by Nintendo, Sega, Sony, Microsoft, or any other such party. Get to tha Choppa!!1 is a registered trademark of its copyright holder. This site makes no claim to Get to tha Choppa!!1, its characters, screenshots, artwork, music, or any intellectual property contained within. Opinions expressed on this site do not necessarily represent the opinion of site staff or sponsors. Staff and freelance reviews are typically written based on time spent with a retail review copy or review key for the game that is provided by its publisher.