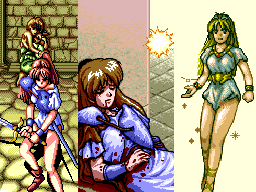 This is the tale of a valiant woman warrior reborn as svelte sylph. She died protecting two children who had sought shelter inside Athena's Temple; unfortunately, even the holy shrine provided no sanctuary from the monsters' onslaught. This was war, and the swordmaiden was just another casualty. Her last thought: more beasts will come for these children.

The temple goddess admired the maiden's pure-hearted wish to protect her beloved homeland . . . and so, the slain warrior's innocent soul was transformed into a leggy tool of destruction. Sylphia was then sent far, far away to massacre all who dared oppose her.

That wasn't the maiden's wish, but seek-and-destroy makes for a more interesting game than sit-and-defend.

After such descriptions of swordplay and magic, it might come as a surprise that Sylphia is a vertical 2D shooter. Our heroine flies above the landscapes of ancient Greece while obliterating the forces of evil with bullets, bombs, and laser beams. Although competent, the quest lacks challenge; it builds slowly and never reaches the heights of Compile's best. There is some dispute as to whether Compile even created this game, since their name does not appear during the credits. In my book, when a reputable company lists a game in the "products" section of their website, that's proof enough.

For shooting masters, challenge is the primary factor that makes ultimate victory feel like an achievement, be it challenge to acquire massive points or challenge to simply finish the game. With an abundance of extra lives and ultimate Giga Fairy Beam special attacks, attaining a one-credit clear with a ridiculous score is more of an expectation than a bragging point. As such, even though the game is far from "broken", my mind cannot justify ranking Sylphia among the best.

My heart disagrees. A good friend of mine once called games like this a "magnificent eight" -- speaking of neither samurai nor gunmen but of great games that touch us personally, invoking love beyond reasonable expectations. These are games that come with caveats to accompany the frothing adoration. My caveat has been delivered; there is now much for me to froth about in Sylphia.

Before vikings, pirates, or ninjas, the fantastical creatures of Greek mythology captured childrens' hearts. Sylphia delivers a cavalcade of such opponents. Bare-breasted harpies and sharp-beaked hippogriffs attack from the air. War galleys and trident-bearing dragons attack from the sea. From the land, burly gladiators heft spiked iron balls, with the intent to smite the heroine as one might smite a bird with an enormous stone. When Sylphia shoots a gladiator's body, he explodes, leaving only the spiked ball on the ground as a memento. Meanwhile, large colossi launch their rocket-fists like the Shogun Warrior Gaiking; Sylphia effortlessly blends Western childrens' favorite monsters with Eastern childrens' anime fantasies. 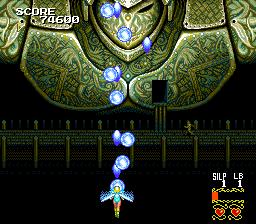 After flying above turreted ramparts and collecting power-up bee icons (escapees from Milon's Secret Castle, perhaps?), the grand colossus awaits. This enormous, static boss has nothing on the colossus from God of War II, but it's a nostalgic encounter. Once upon a time, such enormous bosses -- this one swipes at Sylphia with his hands -- evoked a genuine sense of awe. The clever bit about this scene: before the battle, a little man runs inside an open door on the grand colossus, then activates it for battle. After Sylphia annihilates a slew of ferocious beasts, the big boss is a tiny little man at heart.

He's only the second level boss. Sylphia throws so much at players early on, but somehow still keeps producing surprising new opponents for every level. This is not native Japanese mythology, but the designers immersed themselves in the spirit. Winged gargoyles carry crossbow-wielding Spartans. A skeleton charioteer -- one horn broken from his ram's head helmet -- whips at Sylphia from afar. The flying chariot is pulled by manticores instead of horses. It's as though the developers stole some child's sketchbook and made a game based off of it. It's as though they stole my sketchbook.

Compile then attached all of this wonderful imagery to one of LMS Recordings' finest techno soundtracks. It's too quiet in relation to the sound effects (the same problem as Gate of Thunder) but the strong melodic lines evoke a sense of fantasy while the pronounced beat imposes a sense of urgency. It's not quite like anything else, and it's completely unlike any soundtrack you're likely to hear today.

Sylphia has become one of those expensive rarities that PC Engine collectors house inside glass cases for photo opportunities. My first copy had a hole in it -- a puncture clear through the disc -- and I still got $100 for it. I later realized how foolish I had been, and paid far more than $100 for my second copy. It's a very good game that can't possibly live up to the heightened expectations set by its price, but I love it to death anyway because its atmosphere happens to resonate with my heart.

Sylphia is my "magnificent eight". What's yours?

If you enjoyed this Sylphia review, you're encouraged to discuss it with the author and with other members of the site's community. If you don't already have an HonestGamers account, you can sign up for one in a snap. Thank you for reading!

© 1998-2021 HonestGamers
None of the material contained within this site may be reproduced in any conceivable fashion without permission from the author(s) of said material. This site is not sponsored or endorsed by Nintendo, Sega, Sony, Microsoft, or any other such party. Sylphia is a registered trademark of its copyright holder. This site makes no claim to Sylphia, its characters, screenshots, artwork, music, or any intellectual property contained within. Opinions expressed on this site do not necessarily represent the opinion of site staff or sponsors. Staff and freelance reviews are typically written based on time spent with a retail review copy or review key for the game that is provided by its publisher.