Here lies the once mighty fiend known as Firebrand, felled not by sword or lance but heartless indifference.

Long before being thoughtlessly cast aside in favor of ravenous zombies and fireball-flinging karate men, this deadly Red Arremer enjoyed years of success bedeviling incredibly fragile knights as they traipsed through haunted graveyards in nothing but their underpants. Yet despite such a prominent position in the Ghouls 'n Ghosts hierarchy and subsequent stardom as the protagonist of Gargoyle's Quest, when Firebrand's adventures were logically continued on the Super Nintendo our hero was met with a reception so cold it was as if the blazing bowels of Gehenna had completely frozen over. Hence a formerly promising career was instantly buried six feet under and the luckless demon vanished into the night, never to be heard from again save for an unexpected cameo as a secret boss in the equally unanticipated SVC Chaos. Judging by the quality of that title, some fates truly are worse than death. 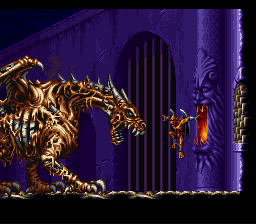 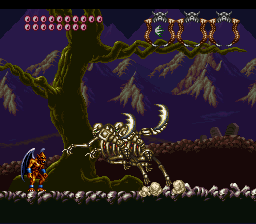 This is a damned shame, for the abyssal awesomeness of Demon's Crest should have made it a darkly glittering jewel in Capcom's crown rather than a jester's cap of bells. The eldritch environments are nothing short of breathtaking right from your initial emergence in a misty graveyard, with a haunting organ to accompany your smashing of shrouded ghouls and diabolic statuary by the wavering glow of distant torches. The light isn't quite so distant when traversing a thick forest that suddenly bursts into flaming ruin, and the heat is only ramped up in the ornate cathedral where hateful harlequins crash through stained glass windows, even as miniscule imps fire massive crossbows from above. The gothic beauty of these surroundings stands out in stark contrast to their gruesome inhabitants  like rotting arms that reach out from the earth looking to hold you down for a fanged head that soon emerges in pursuit of flesh, or the sword-brandishing skeleton, plump organs still bulging from its rib cage, that mocks you with an outstretched finger bone. Whether from fending off the putrefied husk of an infuriated dracolich or leaping free of oozing masses of eyeballs, it should instantly become apparent that you're not playing Super Mario World anymore.

Not only can you expect a stylish showcase of the macabre, but an unconventional formula that's best described as "Mega Man from Hell." The game's only true failing is that its seven stages are far too brief, but this is somewhat misleading as they're also bursting at the seams with secrets to uncover, most notably hidden branches that lead to totally different sections complete with alternate bosses. The level structure is already rather unique owing to Firebrand's ability to latch onto the sides of platforms and flap across the horizon on leathery wings, but obtaining one of the titular crests allows him to assume an entirely new form, each with its own distinctive set of powers and limitations. The crest of wind transforms our hero into a decidedly avian-looking creature that can easily soar through any direction for maximum exploration potential, but plummets from the sky when struck by an enemy as he can't grip any walls; the earth crest, however, creates a craggy hunk of stone able to charge right through otherwise impassible obstructions or fire projectiles that sweep across the ground, but his mobility is severely hampered due to an unfortunate lack of wings. The watery depths present in numerous locations are initially deadly, but upon attaining the power to become a monstrous merman you'll be able to navigate their violent currents and aquatic adversaries with ease. 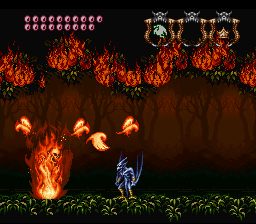 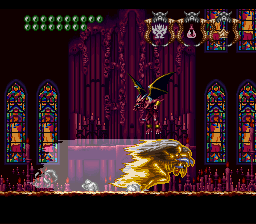 One can generally tackle these stages in any order, but frequently shifting between your available forms is essential to successfully navigating their treasure-laden nooks and horrific denizens, just as a typical boss is highly susceptible to specific attacks while unaffected by others. Even Firebrand's default configuration comes in handy due to pitch black tunnels filled with annoying vampire bats, the little bastards fleeing in terror should you light up the cavern with a few blasts of fiery breath. In order to collect everything it's imperative that you also return to previously finished stages after gaining new abilities, as there are a sizable number of additional trinkets to seek out: extensions to your health meter, tattered scrolls to ink with punishing spells, and mysterious talismans like the crown which causes vanquished enemies to drop even bigger stacks of coinage. Such searches are worth more than the satisfaction of a fully stocked inventory; the final boss boasts multiple incarnations of his own and just as many different endings depending on the size of your hoard. Expose every last secret and you'll even receive a special password that combines all of Firebrand's powers into a single almighty aspect, which he'll certainly need in order to overcome the brutal challenge of the subsequently unsealed ultimate guardian.

From a contemporary perspective one can almost understand why this game was shunned in its own time; it's an unrelentingly dark contrast to typical Nintendo fare like Yoshi's Island that demands careful strategy and thorough exploration in place of simple thumb-pounding action. Ironically these very features are also what make it particularly well-suited for a modern revival, but unfortunately these days the folks at Capcom seem to prefer shirtless devils in skintight leather pants who thrash their foes with sexy guitars. Until that day when someone finally releases a sweet axe that can be played with monstrous crimson claws, Firebrand and his forgotten fans will just have to settle for the overlooked excellence of Demon's Crest.

© 1998-2021 HonestGamers
None of the material contained within this site may be reproduced in any conceivable fashion without permission from the author(s) of said material. This site is not sponsored or endorsed by Nintendo, Sega, Sony, Microsoft, or any other such party. Demon's Crest is a registered trademark of its copyright holder. This site makes no claim to Demon's Crest, its characters, screenshots, artwork, music, or any intellectual property contained within. Opinions expressed on this site do not necessarily represent the opinion of site staff or sponsors. Staff and freelance reviews are typically written based on time spent with a retail review copy or review key for the game that is provided by its publisher.