You know, Shin Megami Tensei fans have had it pretty good lately. The demon-centric RPG series has seen more than half a dozen stateside releases in the last few years alone, and the breakthrough success of Persona 3 and 4 has finally earned this once niche series a spot in gamers' collective consciousness. What better way to capitalize on that than by crafting a revamped reissue of the original Persona to give newer fans a look back at the series' origins? Despite this revival's smattering of tweaks and additions, though, it doesn't do enough to make this relic relevant by today's RPG standards.

Set in modern day like the rest of the series, Persona begins with the nameless protagonist and his high-school friends playing a seemingly innocent occult game that's rumored to reveal the players' futures. What happens instead is something quite different -- the students gain the ability to summon alter-egos known as Personas and the entire city suddenly finds itself overrun by bloodthirsty demons. The proprietor of this otherworldly invasion turns out to be the SEBEC corporation, which has opened a portal between the human world and the demon realm, and naturally your ragtag cast sets out to right the wrongs that have befallen their home turf. The ensuing plot is unexpectedly original, occasionally philosophical, and always quite good. Meanwhile, the characters benefit immensely from a fully retranslated script that reads naturally and conveys a distinct personality for each member of the cast. The PSP release also reincorporates the alternate Snow Queen story path that was excised entirely from the original US release, meaning there's a bounty of new content even for Persona vets. 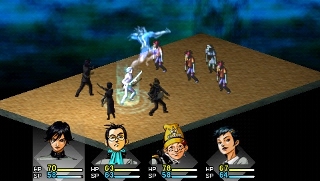 One thing needs to be made very clear, though: Persona is not Persona 3 or 4, nor is it Persona 2. If you're going into the game expecting social links, plentiful side-quests, or clever twists like Persona 2's rumor system, chances are that you'll come away sorely disappointed. The original Persona is a comparatively Spartan dungeon crawl with decidedly little to do other than fight, so your enjoyment of the game is almost entirely contingent upon how you feel about the battle system. Your combative options are pretty simple: each of your five characters can use physical attacks, take pot shots with a gun, or use magic. In typical SMT fashion, enemies have a smattering of elemental strengths and weaknesses, and exploiting them to your advantage is the key to victory in the game's characteristically brutal battles. At the same time, your characters' Personas come with their own set of innate weaknesses that place you at just as much risk of being swiftly annihilated, keeping the tension thick and strategy a necessity.

Granted, if that's all there was to the combat, it'd be fairly unremarkable. Fortunately, what was Persona's brilliant conception in 1997 still impresses today: the negotiation system. Rather than being forced to slash your way through every fight, this adroit mechanic lets you go Ghandi and talk things out instead. Simply choose which demon you want to negotiate with and then pick an action for your characters to perform. You can bribe a demon, threaten them, or even dance in front of them; your actions will affect each foe differently. Bragging to a demon could anger them and prompt an attack, or it could scare them away and thin the herd in front of you. Please the demon, and he might give you a spell card which can then be used to create new Personas. Though it might seem a bit out of place (it is a combat system, after all), the emphasis on communication skills injects your battles with an extra dose of variety and provides an amusing, completely valid alternative to fisticuffs. 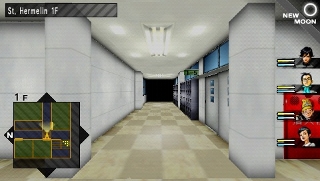 Now if you've been following along, it might seem like the game is perfectly adequate, perhaps even pretty good. But while the combat certainly does have its share of bright ideas, it's completely hamstrung by painfully slow pacing and an absolutely absurd encounter rate. Fights typically throw a multitude of enemies at you and most of them will take at least a few turns to fell even if you're pounding away at their weaknesses. All that time spent casting magic adds up, and while the game gives you the option of truncating spell animations or setting characters on "auto-pilot", the majority of confrontations are still lengthy affairs. Obviously there's nothing inherently wrong with long fights, but Persona forces one of these protracted random encounters upon you every few seconds. On the overworld map, there are times where you'll have less than a second of travel time before being roped into the fray yet again. No matter how novel the combat system may be, seeing the battle menu pop up so frequently snuffs out your sense of progression in a hurry. And being a dungeon crawl, Persona rarely offers you any safe areas which ensures a fairly joyless experience the whole way through. It's strange, too; Atlus tossed amenities like additional save points and more difficulty settings into this remake, so why did the games one crippling flaw slip by unmarred?

The slapdash approach to renovation carried over to game's visuals as well. Apart from the redone overworld map and a few flashy cut scenes, you'd be hard-pressed to spot any improvements made over the downright ugly source material. The character sprites remain as sparsely detailed as ever, and the garish polygonal environs are simply laughable in 2009. In stark contrast to the visual presentation, though, is the game's superb soundtrack. Completely redone by series maestro, Shoji Meguro, Persona's new tunes are universally excellent and surprisingly catchy. It's just a shame that something that sounds this good couldn't look the part, too. 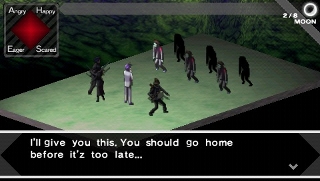 Persona isn't the worst RPG on the PSP by any stretch, but it's a painfully disappointing one. Though the game definitely has its moments and weaves a story that almost makes the quest worth trudging through, it's ultimately too tedious and archaic to be all that enjoyable. Diehard fans ripe for a history lesson in their favorite series might find this release worth checking out, but should do so knowing that this isn't the classic they might be hoping for.

If you enjoyed this Shin Megami Tensei: Persona review, you're encouraged to discuss it with the author and with other members of the site's community. If you don't already have an HonestGamers account, you can sign up for one in a snap. Thank you for reading!

© 1998-2021 HonestGamers
None of the material contained within this site may be reproduced in any conceivable fashion without permission from the author(s) of said material. This site is not sponsored or endorsed by Nintendo, Sega, Sony, Microsoft, or any other such party. Shin Megami Tensei: Persona is a registered trademark of its copyright holder. This site makes no claim to Shin Megami Tensei: Persona, its characters, screenshots, artwork, music, or any intellectual property contained within. Opinions expressed on this site do not necessarily represent the opinion of site staff or sponsors. Staff and freelance reviews are typically written based on time spent with a retail review copy or review key for the game that is provided by its publisher.