Youre supposed to like your Metal Slugs like pretentious indy fans like their favourite bands album catalogue: the initial outings are raw, powerful showcases of brilliance while anything that comes along after the first few handfuls are as well received as that time Cypress Hill decided to make a nu metal album. This leads the seventh and newest entry into a doomed dual dilemma. Not only have the last few Slugs been met with guffaws and fist-shaking, it taunts history by making perhaps the most flaunted error it could ever make. It transports itself entirely away from the arcade cabinets and ties itself exclusively to home consoles, giving it far too much in common with series stinkers, Advanced and 3D.

You expect Metal Slug 7 to be bad. You can give credit to SNK Playmore for meeting expectations early on.

Picking any of the six expected protagonists, ranging from series staple and obligatory all-rounder, Marco, to bespectacled Fio, who makes up for her lack of manly strength by rapid-firing her starting sidearm, leads you to a one-man storm of a cave. Solitary, not so much out of clichéd machismo, but more because the expected co-op was left twitching on the cutting room floor along with the broken hearts of Sluggers who need their hand held by a gun-toting chum. The cave doesnt inspire confidence. Its cave-like, this is true, but the walking dead do not roam its dank innards, nor do other-worldly invaders drop for the ceiling and make a spirited attempts to eat your face. Its just a cave, one filled with bog-standard troops by the boatload, the odd encamped mortar and a smattering of armour. Its a basic plod from left to right. Jump over a gap now and then or dodge a bit of falling metal, but even when you steal away in a stolen tank to take on a serpentine mole machine flimsy enough to be considered constructed out of soggy bread, theres no real highlights to be found. Theres only the nagging sensation that a trip back in time is the only likely way to find a Slug frantically surreal enough to live up to your expectations.

Stage 2 is desperate to keep you confined underground as you continue to explore the cave, this time complete with mine carts that tip over, spilling killer soot from a few feet, which is enough to kill your hardened marine quicker than it would ruin the day of their local laundrette. Sentient missiles that burrow underground and pull you waist deep into the soil make a brief appearance, but are soon replaced with wave after wave of vanilla troops who march gleefully into your onslaught of bullets. Theres a boss fight against a metallic Cyclops whose entire offence centres on his flailing arms and a huge laser blast telegraphed hard enough for even the most incompetent player to calmly stroll away from. You may even kill it long before it makes this attack if your aim is true enough. 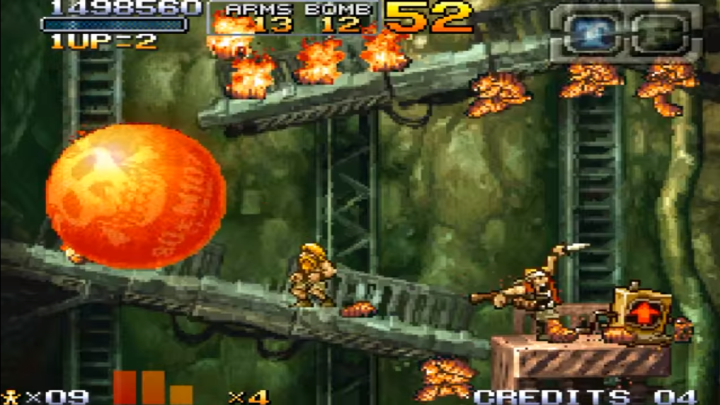 Then, in the midst of a third stage of damning underground exploration, comes the first sign that someones started to remember that theyre developing a Metal Slug game.

Sections here charge you with escaping from a rolling sphere formed of molten lava by blasting your way through chunks of comet and desperately turning cranks to activate long rusted manual lifts. The corridors are lined with mucus, infested with the wiggling larva of something you dont really want to be around when they mature. A quick and easy boss fight later, and its onto the next stage. In a shocking twist set to surprise none, its set in a cave.

Youre immediately offered a multiple pathway. One of them is a dead end. The other...

The other leads to a rocky cave exterior set against a blistering waterfall which plays home to levitating mecharmour, carnivorous seedlings and tentacles that grab you up if you let them, thrusting you into a teeth-lined bud atop the screen that chews you up and belches out a few bones and what appears to be a kidney. As if happy to finally be outside, the action starts to quickly escalate. Instead of strolling nonchalantly though shock troops, youre parachuting down ancient ruins while tanks fitted with cattle grills and missile silos pelt you from all directions.

Eventually, regular soldiers become futuristic mercenaries using overpowered firearms that shoot globes of thunder or hives of heat-seeking mini-rockets. They lay you to siege on a snow covered mountain while the air remains constantly abuzz with gunships, bombers and layer after layer of bullet hell. A mammoth tank splits into three core pieces, forcing you to dodge an endless torrent of plasma, tracer bullets and constant hailstorms of bombs to navigate around its always-roving tri-split shell in order to take proper aim at its weak points. Men in jet packs gloat from the safety of the screens boarders while splats of slime bound across the screen. Steel sleighs scream down powdery slopes, promising to smash you off the screen and towards a cheap but totally avoidable death. Eventually, the game wakes up and, eventually, youll realise that its not quite the disappointment you assumed it would be. 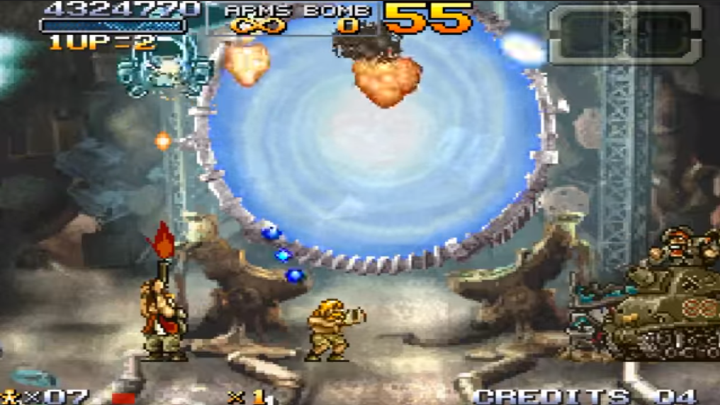 It doesnt even have unlimited continues. Thats one controversial angle I get to safely ignore.

Theres extras and options and the hugely appreciated decision not to integrate the touch screen, but theres also frantic run-and-gun action to be found if you exhibit a little bit of patience and give SNK a bit of time to get things moving. Theres ragged hostages to be rescued who reward you with fruit or bombs or high-powered weaponry of which you can now carry and switch between two at a time. Theres new weapons like the Zuma Blade which carries crazy powerful but very limited promises of huge up-close damage, and theres a commendable job of downsizing everything to fit onto the handhelds screen. But its more what the game remembers that eventually turns it around rather than what it brings in new.

It remembers to flood the screen with targets less homicidal and more slapstick, but without taking away the very real threat of your imminent demise at their hands. Its not as wonderfully goofball as the founding titles, but its a solid effort in recapturing just what it was to try and survive them. Its a resurrection of sorts, one trying to forget the plummet taken in the bid to grasp 3D, and one returning to its hand-drawn roots -- out of choice rather than hardware constraints and necessity.

Keep your nerve until you can emerge from the caves. Your bravery will be rewarded, and, in doing so, youll have to eventually give SNK Playmore credit for finally exceeding expectations.

If you enjoyed this Metal Slug 7 review, you're encouraged to discuss it with the author and with other members of the site's community. If you don't already have an HonestGamers account, you can sign up for one in a snap. Thank you for reading!

© 1998-2021 HonestGamers
None of the material contained within this site may be reproduced in any conceivable fashion without permission from the author(s) of said material. This site is not sponsored or endorsed by Nintendo, Sega, Sony, Microsoft, or any other such party. Metal Slug 7 is a registered trademark of its copyright holder. This site makes no claim to Metal Slug 7, its characters, screenshots, artwork, music, or any intellectual property contained within. Opinions expressed on this site do not necessarily represent the opinion of site staff or sponsors. Staff and freelance reviews are typically written based on time spent with a retail review copy or review key for the game that is provided by its publisher.