HEY, GAMERS! Todays review is brought to you by the letter E, commonly found in such words as "execution," "eviscerated," and of course "eroticism"  all of which can likewise be found among the desert wastes of Exile. But Ill be honest with you; this is a pretty standard action RPG featuring sidescrolling swordplay in the vein of Zelda II or Ys III  except instead of some lanky elfin dork, youre thrust into the role of Sadler, laconic Syrian leader of the hashshashin and deadly foe of the Christian invaders despoiling his homeland. Having killed his own despotic father in the awkwardly-titled XZR, the young assassin now finds himself in an uneasy alliance with the Knights Templar as they travel the globe in search of the Holy Grail, and if that doesnt raise a few eyebrows his personal habits sure as hell will.

Not only is our flame-haired antihero never seen without a freshly rolled cigarette dangling from between his sneering lips, but he shoots up with "alternative medicines" like opium and cocaine in order to regain health or temporarily beef up his stats. In the MSX games Sadlers recreational activities could cause him to hallucinate or even OD, but unfortunately this time around theyre otherwise normal power-ups. Ironically enough, patching up your wounds with some fine Turkish hashish isnt even close to being the most shocking thing youre going to come across. The introductory cinema depicts helpless civilians being mercilessly cut down by armored knights, and the in-game enemies frequently bleed and occasionally explode into clouds of gore; this is nothing, however, compared to the destroyed village you later encounter where the Crusaders are still in the act of putting houses to the torch and its heathen citizens to a slow, fiery death at the stake. After all, nothing quite says "piety" like "inquisition." 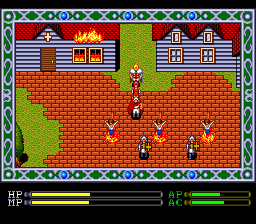 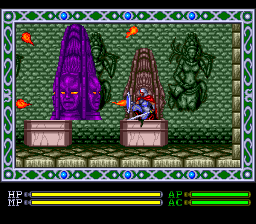 Youll even find yourself traversing a quaint Greek hamlet filled with naked people celebrating one of their quaint orgiastic holidays, and speaking of old time religion Sadler also visits Hindu and Buddhist temples in order to murder the local deities. Bloodthirsty Christians, eldritch Masonic rituals, myopic 8-bit nudity  fortunately this is the TurboGrafx CD were talking about, so apparently no one noticed. And since we are indeed talking about the Turbo you can count on a sweet redbook soundtrack, tons of cinematic interludes, and some kickass voice acting with none other than Kaneto Shiozawa in the lead role, a man whose distinctive voice of steel is a perfect match for our cold-hearted killer. Well, in the Japanese version. In fact, if youre even passable in the language Id strongly recommend going with the import: Working Designs dubbing sucks, their translation dances around the more objectionable content (Christians become "Klispens", drugs become "tonic") and the PC Engine disc will only run you a few bucks  which is, coincidentally enough, about what its worth.

This is a ridiculously simple game  you can quickly max out your experience level and most bosses can withstand only a few hits after even the slightest bit of level grinding. Sadlers health and magic points are fully restored if he simply exits the current dungeon and returns to the world map, and his limited array of spells are completely unnecessary to begin with. To make up for this the action scenes are fairly labyrinthine complete with numerous doors that lead to similar looking areas, commonly looping back to where you started or eventually leading to a dead end, but its nothing a little mapping wont solve. In fact, the very beginning portion of Sadlers quest is by far the hardest  trapped in a series of caverns, you cant leave until you kill the boss, assuming you can cross a long series of platforms without being knocked off by all the monster dragonflies that keeping zooming by. Its due to this paltry lack of difficulty that Working Designs basically ruined their translation of Exile II by screwing around with the code until it become almost impossible to complete. 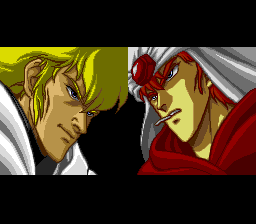 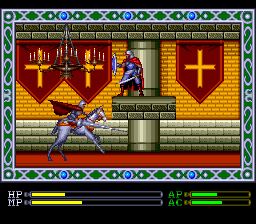 Amazingly enough this hasnt yet been submitted to Nintendo for their Virtual Console, which would be totally worth it just for the looks on their faces. I mean Altair and the Prince of Persia are just a couple of whiny bitches compared to a coke-snorting holy slayer who fends off heathen armies, demigods, and nubile nudes  and he did it before being surrounded by bloody carnage and religious mysticism was the thing to do. In the end Exile is a fair game bolstered by an outrageous plot; not something youll get addicted to, but not something youre likely to forget, either.

If you enjoyed this Exile review, you're encouraged to discuss it with the author and with other members of the site's community. If you don't already have an HonestGamers account, you can sign up for one in a snap. Thank you for reading!

© 1998-2021 HonestGamers
None of the material contained within this site may be reproduced in any conceivable fashion without permission from the author(s) of said material. This site is not sponsored or endorsed by Nintendo, Sega, Sony, Microsoft, or any other such party. Exile is a registered trademark of its copyright holder. This site makes no claim to Exile, its characters, screenshots, artwork, music, or any intellectual property contained within. Opinions expressed on this site do not necessarily represent the opinion of site staff or sponsors. Staff and freelance reviews are typically written based on time spent with a retail review copy or review key for the game that is provided by its publisher.