If you had a harem of busty lasses that you could bed at the drop of a hat, chances are that you'd be a pretty happy guy. That's exactly the situation you'll be in as Bazooka Cafe's protagonist, Hideyuki Mizuno. After his father, the owner of a bustling cafe, suddenly collapses, Hideyuki is left with no choice but to take the reins and run the establishment. Lucky for him, all of the workers at the cafe happen to be cute girls with outrageously huge gazongas. Breasts large enough to have their own gravitational field and that laugh defiantly in the face of physics. Sounds like a good time, right?

Sort of. Bazooka Cafe's story revolves around four beautiful girls: Mitsuki, the ditz; Cocoa, the woman you regard as a maternal figure; Narumi, the brash, combative type; and Yayoi, the mature businesswoman. There's no hidden complexity here -- the cast is little more than a sampling of anime stereotypes. On the bright side, the actual plot is fairly fun to read through, as Hideyuki encounters all the inherently humorous harem antics you'd expect. Even so, claiming the story to be anything but fluff would be an outright lie -- this game exists for one reason: the sex. While Hideyuki might struggle to run a restaurant, he certainly has no problem serving these anxious hostesses a dish of his own, and does so with frightening regularity. You can expect the pants to come flying off at least once every five minutes once you've gotten close to one of the leading ladies. It's the very definition of a sex romp, but don't expect anything too risqué -- every scene is vanilla to the point where you could actually lose interest in sex long before the credits roll. The bigger problem, however, is that most of these scenes consist of a mere two pictures (with the second often being roughly the same as the first) and a whole lot of text. For a game focused squarely on the forbidden act, it's odd that there's so little to ogle at. The game does earn bonus points for letting you and your lady friend liberate yourselves in a back alley, but otherwise, don't expect too much.

If it's gameplay you're looking for, though, the cafe's fresh out. As with most games of this sort, you'll spend most of your time clicking through long passages of dialog and occasionally making choices that determine which girl you end up with in the end. The problem here is that you'll make a whopping two to three decisions that actually affect the outcome. What's worse, those decisions directly ask you which girl you want to be with. And you thought dating was a challenge. Once you've chosen your target and actually start dating her, the gameplay is over -- you'll spend the duration of the experience reading through text and watching Hideyuki express himself the only way he knows how. 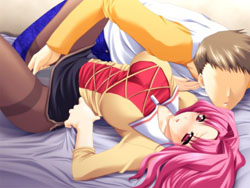 With an expression like that, this can't be consensual.


Bazooka Cafe will last a mere two hours on your first playthrough, though you can get considerably more time out of it if you restart the game to follow each of the four girls' story paths. Unfortunately, there's not much incentive to do that because three out of those four storylines are almost identical, leaving only the dull copulation to keep you trudging on. Without any sort of interactivity while you're dating or touches like the ability to play the field, Bazooka Cafe is left an incredibly simplistic game that you'll have had your fill of by day's end.

While the babes of Bazooka might not have a lot going on upstairs, they sure are easy on the eyes. The female character designs for this game are gorgeous, both clothed and not so much. While not abundant, the backdrops in the game are also quite detailed and colorful, leaving you with a very visually appealing game. The only graphical anomaly is the protagonist, who appears with no facial features and just looks strange every time he's shacking up with the ladies -- it can be a little disturbing. As you'd expect, all of the girls' dialog is voiced in sexed-up, high-pitched voices, and the soundtrack consists of standard issue anime and porn music, depending on the scene. Inexplicably, some sex scenes are accompanied by what can only be described as clown music, which is pretty amusing, if unintentional.

If you enjoyed this Bazooka Cafe review, you're encouraged to discuss it with the author and with other members of the site's community. If you don't already have an HonestGamers account, you can sign up for one in a snap. Thank you for reading!

© 1998-2021 HonestGamers
None of the material contained within this site may be reproduced in any conceivable fashion without permission from the author(s) of said material. This site is not sponsored or endorsed by Nintendo, Sega, Sony, Microsoft, or any other such party. Bazooka Cafe is a registered trademark of its copyright holder. This site makes no claim to Bazooka Cafe, its characters, screenshots, artwork, music, or any intellectual property contained within. Opinions expressed on this site do not necessarily represent the opinion of site staff or sponsors. Staff and freelance reviews are typically written based on time spent with a retail review copy or review key for the game that is provided by its publisher.