There comes a time in every fighting game series life when things just arent as exciting as they used to be. Though it galvanized the genre with its first release, Soulcalibur proved to be no exception with its wretched third outing which not only offered no innovation, but actually made the combat less enjoyable than prior installments. Namco ventured back to the drawing board for nearly three years and now returns with Soulcalibur IV, which is the strongest entry the series has ever seen.

Shifting to this fourth Calibur meant cleaning up the mess that Soulcalibur III left  no easy task. Thankfully, Namcos mistakes have been remedied: fewer exploits, the removal of the somewhat pointless Soul Charge technique and slightly slower gameplay  seemingly small changes, but ones that nonetheless make for a smoother, more refined combat system. Namco has also thrown in a few new nuances for good measure, the most obvious of which is armor that can be destroyed after taking enough hits, resulting in an opponent more susceptible to damage. SC IV also introduces over-the-top instant kill moves known as Critical Finishes which can be used when youve landed enough strikes on a blocking opponent. This attack was implemented as a way to keep players on the offensive, though it doesnt amount to much as youll rarely be able to use the move in practice. If youre afraid of the formula being mucked with too much, though, worry not -- this is still Soulcalibur. Neophytes can still pick the game up and mash out a few cool-looking combos from the get-go, and veterans will still find a fighter with all the intricacies theyve come to expect -- its just a bit dolled up now. 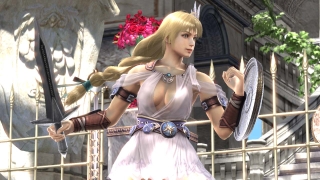 The ladies of SC IV are fully-figured.


The same can also be said of the roster, as each and every returning character has gotten an overhaul in the form of expanded move lists and balance tweaks; and while some combatants arent quite as devastating as they once were, others have been upgraded to legitimate character choices. The full roster is more than 20-strong and includes several new faces, yet by some miracle, none of the characters feel like clones of one another. Theres also no shortage of fighting styles represented. Do you want a warrior whos quick on his feet? A brute with insurmountable strength? A duelist who pokes at opponents from afar? Whatever your preference, theres at least a few characters that youll feel immediately at home with. The more controversial part of the roster is unquestionably the included Star Wars characters, consisting of The Apprentice and Yoda (who is exclusive to the 360 version of the game.) While the Force-users certainly dont fit into Soulcaliburs world of ancient swordsmanship and Yoda is essentially useless, these cameos are still amusing diversions.

Soulcalibur IV certainly isnt lacking in ways to beat people up, either. Topping the list of modes is the story mode, which  you guessed it  presents a series of battles taking place within the SC narrative. Unfortunately, the story consists of a few uninspired paragraphs of text that will be forgotten within mere minutes and the fights themselves often incorporate silly ideas like forcing you to play as a character other than the one youve chosen. Its more of a nuisance than anything, but luckily, theres still a standard arcade mode to provide you with a straightforward battle. If you are in the mood for something more creative, though, theres a new mode waiting for you called The Tower of Lost Souls. Here, youll travel through dozens of floors which pit you against opponents armed with a wide array of stat boosts like a stronger horizontal attack or invisibility. Fortunately for you, theres a ridiculous amount of equipment you can equip to bolster your own characters attributes, which lends the game an RPG feel that works wonderfully. If you have ever wished your fighting game had that extra layer of complexity to it, chances are that this is exactly what youve been looking for.

As fun as those modes are, though, the one feature thats possibly the most innovative is the character creation mode. Thats no joke -- the character creator in Soulcalibur IV is the most fully-featured of any fighter, and it actually impacts the gameplay. The process is started by either choosing an existing character to dress up (or down, if youre into that) or start from scratch. Next, you can throw on whatever clothes, armor, weapons and accessories you want from a pool of dozens upon dozens of pieces. If youre the creative type, youll no doubt while away hours concocting look-alikes and utterly bizarre combatants. If youre the sort that just wants to express yourself by applying fist to face, then youll appreciate that this mode lets you change your characters parameters like attack, defense, and HP through the equipment youre using. Considering that up to this point, character creation modes have been mostly fluff, this represents a huge improvement that makes playing dress-up fun, useful and oddly addicting. 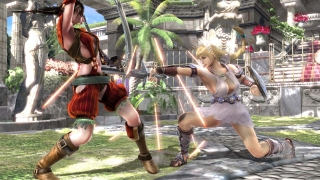 The fighting is pretty good, too.


If playing by your lonesome just isnt cutting it, theres also a fully-featured online mode which finally lets you prove that youre the best SC player out there. Matches are managed by a fairly standard lobby system in place that holds up to four wannabe warriors, and the fights themselves run relatively well. Players looking for a competitive, lag-free affair wont find it here, but those who simply want a casual brawl wont have any problems. As with any 360 game, theres a boatload of achievements (dubbed honors in SC IV) to chase after which, once accomplished, will unlock new equipment for you to pore over. Needless to say, this game has some legs to it.

Without question, Soulcalibur IV is the most visually arresting fighter to date. Each stage of history is filled to the brim with minute details, detailed textures and dramatic lighting. The characters look similarly spectacular and everyone from the muscle-bound Astaroth to the generously-portioned female cast sweeps fluidly through the stages. The clashing of swords has never looked so good, and being in the fray has seldom sounded this good, either. Each vista is accompanied by a beautiful orchestral score that ranks among the best music recorded for the series. And yes, Star Wars nuts, Duel of the Fates and the classic Star Wars theme are present. The satisfying weapon sounds as well as both English and Japanese voice acting round out SC IVs definitive presentation.

Contrary to most releases in the genre, Soulcalibur IV offers an awful lot of game. This is a fighter with enough content to keep you hooked for months, and the combat engine is polished to a mirror sheen. Namco has truly bounced back -- SC IV is an incredibly robust game that should serve as an example to competitors and can be easily recommended to anyone looking for a fight.

If you enjoyed this Soulcalibur IV review, you're encouraged to discuss it with the author and with other members of the site's community. If you don't already have an HonestGamers account, you can sign up for one in a snap. Thank you for reading!

© 1998-2021 HonestGamers
None of the material contained within this site may be reproduced in any conceivable fashion without permission from the author(s) of said material. This site is not sponsored or endorsed by Nintendo, Sega, Sony, Microsoft, or any other such party. Soulcalibur IV is a registered trademark of its copyright holder. This site makes no claim to Soulcalibur IV, its characters, screenshots, artwork, music, or any intellectual property contained within. Opinions expressed on this site do not necessarily represent the opinion of site staff or sponsors. Staff and freelance reviews are typically written based on time spent with a retail review copy or review key for the game that is provided by its publisher.