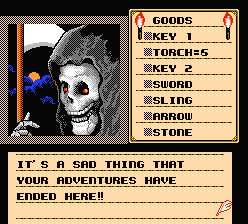 When I began rebuilding my NES collection, the point-and-click adventure, Shadowgate, was on a short list of games that I absolutely had to have. It wasnt because of hardcore gameplay, collectors value, innovative design, or even fond nostalgia. Its because the Grim Reapers smirk still bugs me after nearly two decades. Shadowgate was my childhood nemesis, and I wanted revenge.

Taking on the role of a courageous king questing through the halls of a warlocks castle, I was once again determined to prove my worth. No childish frustrations and rental due dates were going to keep me from solving the puzzles ahead. I gallantly walked through the front gate, up the marble steps of the foyer, and pulled the handle of the main door. Locked After 15 minutes of impotent confusion, I resorted to punching everything in the room, including myself. Then my torch burned out, and a familiar face welcomed me into the afterlife.

Shamefully, I had been tricked by the medieval equivalent to slipping a key under the doormat. Most of the items you need in Shadowgate are lurking conspicuously beneath your nose. If its not bolted down, grab it, and if you cant grab it, burn it. You might wonder what good a silver arrow will do without the matching bow, especially with a newfound sword at your side, but rest assured that it will be vital to surviving the darkest reaches of the castle. Finding the tools is easy. Figuring out how and when to use them is the challenge.

I typically draw a line to distinguish between two types of adventure games. There are those that require ingenuity and deduction, like Myst and Beneath a Steal Sky. Then there are those that rely on trial-and-error and bizarre combinations of items. Lucasarts put themselves on the map with the latter, but they did it with style. Why would anyone microwave a hamster or use a rubber chicken for a zip-line? Who cares? Its funny. Shadowgate is serious business, but it dangerously tip-toes the line between logic and nonsense.

Shadowgate is at its best why you encounter a puzzle, ponder a solution, and dig the proper tools out of your inventory. At its worst, it tries to be too clever for its own good. A map in your control panel displays all exits in every room throughout the castle, except one vital passage. After following the rules for a dozen rooms, youre supposed to know that the rules can be broken. Other times, the rules need more clarification. I was in need of a particular spell, so I read the necessary text, but nothing happened. I could have saved myself a lot of aggravation had I known that, unlike every other text, that one had to be read twice. 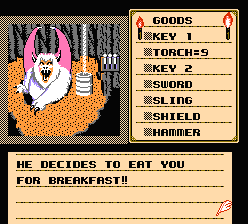 Nowhere is the precarious balance more evident than in death. How are you supposed to know that a ladder has no bottom end, or that a passage will suddenly collapse upon your skull? You do it, say hello to the reaper, and try again until you get it right. There are even occasions when you will die for doing the right thing, to the wrong object. At one point, three identical mirrors stand before you. Smashing one reveals a doorway. The shards from the other two will kill you. While death only sets you back to the previous room, one of Shadowgates main features makes it devastatingly permanent near the end.

Even in relative safety, your life rests in the flames of torches picked up throughout the castle. If you run out of torches or fail to light another before the flames flicker away, its game over. It doesnt matter if youre one hour or one second from victory. Once they are gone, you have to do it all over again, only faster. Every time I solved a puzzle I found myself asking the same questions, "Did I take too long? Do I have enough light to reach the end? Should I save myself the trouble and restart now?"

I am happy to say that I finally completed Shadowgate, but my vendetta is yet unfulfilled. As my torches dwindled to embers and deaths cruel smile waited, I turned to a guide for assistance. Shadowgate has plenty of finely crafted puzzles and some truly memorable moments, but my ego couldnt justify the notion of speed-running my way closer and closer to the end.

If you enjoyed this Shadowgate review, you're encouraged to discuss it with the author and with other members of the site's community. If you don't already have an HonestGamers account, you can sign up for one in a snap. Thank you for reading!

© 1998 - 2022 HonestGamers
None of the material contained within this site may be reproduced in any conceivable fashion without permission from the author(s) of said material. This site is not sponsored or endorsed by Nintendo, Sega, Sony, Microsoft, or any other such party. Shadowgate is a registered trademark of its copyright holder. This site makes no claim to Shadowgate, its characters, screenshots, artwork, music, or any intellectual property contained within. Opinions expressed on this site do not necessarily represent the opinion of site staff or sponsors. Staff and freelance reviews are typically written based on time spent with a retail review copy or review key for the game that is provided by its publisher.