Whether you like him or not, you have to give that smug bastard Tomonobu Itagaki his due  the mans got an enormous set of balls, and Im not talking about the beach variety.

This isnt just because Team NINJA willfully defied their ancestors by exclusively throwing their support behind the foreign devils Xbox, because it plainly revealed the PS2 and especially the Gamecube for the piddling toys they really were. And its not those brash pronouncements that NINJA GAIDEN would be the greatest action masterpiece of all time, because the finished product rocked harder than just about anything I can think of. Except maybe Mr. T . . . fighting off a troupe of unscrupulous ninjas . . . in a freestyle breakdance competition . . . aboard a Viking longboat . . . while buxom blonde valkyries carry away the fallen on aquatic . . . war mammoths.

But Im actually referring to the fact that Tom had the cajones to think up, develop, and then seriously release a game that consists of little more than breasty beach bunnies who hop up and down in skimpy swimwear  and people bought it in droves. Of course just because I admire and slightly fear the man for doing it doesnt mean I think his game is any good. The visuals are typically gorgeous, but when it comes to Xtreme Beach Volleyball the only parts that arent underdeveloped are the girls.

Despite the title, these volleyball matchups are anything but extreme  theyre actually pretty dull. Whether hanging back on the defensive or suddenly charging the net, your computer-controlled partner automatically sets herself up in the best position, and when it comes to offense all you really do is either pass her the ball or properly time the spike button to smack it over yourself. There are marginal differences between each character in terms of power and blocking ability but every match still plays pretty much exactly the same, which is pretty crazy considering its at least nominally the focal point of the whole thing. Considering this was spun off from a series renowned for furiously paced fighting and killer counters, it would have been totally sweet if there were stamina gauges and flashy special attacks with which to punish your opponents à la Super Dodgeball, but instead most of the games development seems to have been concentrated on perverted peeping. Every time one of the girls scores a point she celebrates by jiggling about in an uninhibited victory pose that lets you pan the camera all around her tanned, toned flesh from every angle or simply zoom in on those rubbery gozangas. 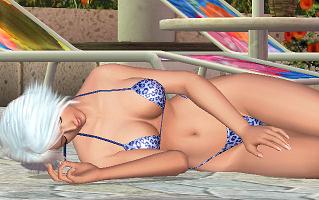 fig. one: *boing*
Unfortunately there arent any other games to choose from except for pool hopping  depending on the distance, youll either lightly tap or brutally mash the jump button over and over again to bounce down a string of floating tiles as quickly as possible without falling into the water. Doesnt that sound terribly exciting? Well thats a shame, because your only other available pastime is to idle the days away being a shameless voyeur. Travel to a corner of the island without any opponents to play against and youll instead watch short sequences in which your character does something gratuitous like heaving pushups, a writhing hula dance, or just languid stretching in the sand  all the time giving you complete control over the camera, naturally. Elect to spend your afternoon in the nearby jungle and she alternatively straddles a massive tree limb, slowly thrusting bronzed thighs across that ancient hardwood; sadly theres far greater variety to these interludes than the actual game itself.

Of course youll still need to play volleyball constantly, even if its not really much fun, if you want to earn the huge mounds of cash necessary for all the different swimsuits and accessories offered in Zack Islands various shops. Every character features a unique collection of available swimwear, which is nice; sure, maybe the matches are always the same, but at least you can look slightly different as you spank that ball for the thousandth time! However youre also supposed to buy gifts for all the other girls, not only to raise your compatibility together but so you can force them to own tawdry bikinis that they can never purchase on their own. Everyone also has her own set of tastes when it comes to these gifts  Kasumi enjoys gorging herself on strawberries and the color pink, while ultrahot assassin Christie prefers guitars and guns  that youll have to remember if you want to team up or just trick Tina into wearing nothing but a string of jewels over her nether regions. 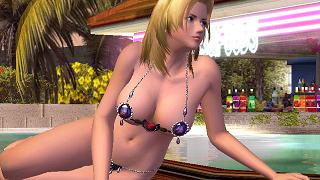 fig. two: trickery
Then again, no matter how hard you try she might just throw it (and all that hard-earned money) away in disgust; you know how mercurial women are. For that matter, losing a match will seriously piss off your current partner, so the next time a ball comes hurtling towards her she might just stand there and admire her new shade of nail polish. And God help you if you dont halt this losing streak fast or she might even drop your sorry ass  unless youve been lavish with the gift giving youre going to waste a ton of time trying to find a new partner; youll have to slowly butter someone else up despite lacking a source of income since the hopping game is worth practically nil. Even when things are going great the matches quickly become exhausting, as the difficulty level is directly proportional to your duos happiness level. Man, its like no matter what you do, youre still ed!

Okay, maybe the core gameplay is both simple and damnably repetitious, but at least you get to rock out to an epic soundtrack of TurboCD proportions. Hahaha, just kidding. The music consists of saccharine drivel by Christina Aguilera, Reel Big Fish, and all those other crappy bands you damn kids seem to like. Fortunately for everyone else, you can also use the Xboxs custom soundtrack feature to supply your own tunes, offering the perfect excuse to bust out those old Joan Jett albums. Hahaha, just kidding again. You never need an excuse for that.

So basically Xtreme Beach Volleyball is a one-trick pony with elements yanked out of a dating sim, and yet for most of the Xboxs lifespan it remained at full price. The 360 sequel expands on this formula a bit with slightly more complicated gameplay and additional activities, but otherwise it retains the same core problems and ridiculous price tag as its forbearer. This utter lack of hardcore action simply isnt the sort of thing weve come to expect from Tom Itagaki; right off the top of my head, here are a few potential improvements that would have made the original a whole lot better and should have been implemented in DOAX2:

1.) Different weather conditions like wind or rain that would affect the balls physics as well as possibly blowing someones top off. Besides your libido, this would also freshen up the stages considerably  imagine enjoying a relaxing game of volleyball in the midst of a severe thunderstorm, blinding torrents of lightning frequently coursing through the nets metal poles while hundreds of rather confused monkeys rain down from the mountains overhead.

2.) Actual variety to the volleyball matches instead of always being the first to seven points. You could have matches in which one team tries to score more often than their opponents within a specific time limit, randomly determined handicaps, or invitations to enter a single elimination tournament for a big fat payoff. We wont even get into the prospect of playing in a mud pit since Rumble Roses has officially ruined that concept forever, but itd be nice if you could switch between your partner on the fly, or steal a new one from your rivals after handing them a soul-crushing loss.

Getting back to the Super Dodgeball idea, your goal could simply be to eliminate the opposition by way of pounding ball body blows, underhanded secret attacks, and of course screen-filling TAG TEAM SUPER ARTS OF DEATH. Oh, and every so often a nearly naked man would run across the screen tossing power ups, just like in Samurai Shodown.

3.) A bonus mode in which youd kick sand into nerds faces, those faces being digitized images of other video game designers like Hideo Kojima and Shigeru Miyamoto. I can definitely see Itagaki-san doing this.

4.) A little more variety to those dumb minigames, and theyd actually be worth some decent chunks of change  possibly some sort of surfing simulation where youd have to hang ten high atop a tsunami using the analog sticks, with a hungry shark in hot pursuit and the song Wipeout blaring from your speakers. Or maybe a rhythm-based freestyle breakdancing challenge that may or may not involve Mr. T. No wait, Id rather see one where Kasumi and company have to ride a mechanical bull. From SPAIN.

5.) Each girl should have a sexy pirate wench outfit. You know: three-cornered hats . . . shockingly low-cut bodices . . . skintight leggings with large tears . . . parrots . . . that sort of thing. I dont really have any reasoning behind this one, but pirates are totally sweet. 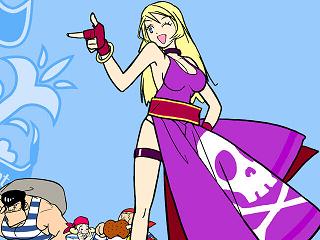 If you enjoyed this Dead or Alive Xtreme Beach Volleyball review, you're encouraged to discuss it with the author and with other members of the site's community. If you don't already have an HonestGamers account, you can sign up for one in a snap. Thank you for reading!

© 1998 - 2022 HonestGamers
None of the material contained within this site may be reproduced in any conceivable fashion without permission from the author(s) of said material. This site is not sponsored or endorsed by Nintendo, Sega, Sony, Microsoft, or any other such party. Dead or Alive Xtreme Beach Volleyball is a registered trademark of its copyright holder. This site makes no claim to Dead or Alive Xtreme Beach Volleyball, its characters, screenshots, artwork, music, or any intellectual property contained within. Opinions expressed on this site do not necessarily represent the opinion of site staff or sponsors. Staff and freelance reviews are typically written based on time spent with a retail review copy or review key for the game that is provided by its publisher.