There sure is a lot of red in this game...

No More Heroes is the latest effort from Suda-51, the man behind the notoriously insane Killer7. He hasnt changed his ways much as far as bizarre ideas go, but No More Heroes is a much more gameplay-focused title and arguably one of the Wiis strongest action games yet.

NMHs premise is strange, to say the least. Travis Touchdown, the games nerdy, otaku protagonist, buys a beam katana in an online auction. To his surprise, it actually shows up, and what better way to test out the merchandise than by killing an assassin? Upon beheading his foe, a woman named Sylvia pays him a visit on behalf of the United Assassins Association, and informs Travis that he is the 11th ranked assassin. Travis, being broke and rather bored, decides that he might as well fight to become number one. It's a ridiculous plot, but it doesn't take itself too seriously so it ends up being a lot of fun. The characters are similarly off-beat, and while they're pretty one-dimensional, they're entertaining during their time on-screen. Needless to say, this game is as weird as you'd expect from Suda-51, so fans of his work won't be disappointed.

Your primary objective, and the most interesting part of the game, is taking out higher ranked assassins in order to advance on the list of the top killers. These missions have you running through a series of rather linear corridors while fighting droves of very same-y looking opponents. Normally, this would be a no-no for an action game, but its an absolute blast here, thanks to the combat system. Fighting is easy  simply hit the A button repeatedly to perform a combo attack that drains your enemys health. When their life has been depleted, an arrow will appear on screen which tells you to swipe your Wii Remote in that direction. Doing so results in Travis hacking his enemy to bits, resulting in a sea of blood and, inexplicably, coins. And by sea of blood, I mean that the amount of blood that sprays out is far more than the human body could possibly hold. Its extremely stylized and incredibly satisfying to watch right through to the end of the game. Of course, the combat would wear thin before long if that was all there was to it, but thankfully, the game also throws in stun attacks, throws, high and low stances, charge attacks, and a slew of evasive maneuvers. There are even slot reels that randomly grant you temporary powers to up the chaos further. Theres no shortage of depth to the combat and youll likely need all of these techniques to survive some of the games more brutal battles. The game uses the Wii's motion controls extensively, but it doesn't overuse them like so many action games seem to. In fact, the motion controls manage to add a visceral touch to the fighting and make executions and throws even more fun to pull off. 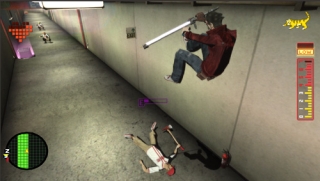 No paint? No problem! Use your victims to turn those walls red!


All of this fighting culminates in some spectacular boss battles against rival assassins, which are even more intense and satisfying to fight through. These duels can be quite difficult and surviving is very rewarding. The game evokes the same feeling of bliss that old-school arcade classics like Final Fight did. No More Heroes isnt about complex environments or copious enemy types  its about the carnage and the sheer fun factor. If thats what youre looking for, youll find it here in spades.

The life of an assassin isnt all glamour, though. When youre not severing peoples blood vessels, youve got a life to live and money to make to sign up for the next battle with a ranked assassin. These segments give you a wide-open world to explore a la Grand Theft Auto. After finishing off an assassin, you'll automatically go back to Travis pad where you can do everything from watching videos that teach you new attacks to changing your clothes to playing with your cat, Jeanne.

When you do decide to hop on your bike and hit the mean streets of Santa Destroy, though, theres an ample, though not abundant, number of places you can go. If you want to upgrade your stats, you can train with your master (by playing mini-games) to increase your strength, buy new weapons, or take advantage of a number of other avenues for improvement. If you need to make money, you can take on part-time jobs like garbage collection or coconut collecting. Sounds mundane? Surprisingly, the mini-games for these lame-sounding activities are addictive, arcade-style jaunts. Theyre enjoyable and add some variety to the game to keep things feeling fresh. If you still feel the need to chop people to bits, though, there are some assassination missions for you to take on as well.

There are a decent number of activities to take on in Santa Destroy, but the open-world portions are the games biggest weak point. There is a huge lack of polish in the city, and niggles like the shoddy collision detection and the inconsistent frame-rate are very noticeable. Its difficult to shake the feeling that these segments would have been better handled through a menu screen than an interactive environment. The city is never a boring place, but considering how much time youll spend on the town, the lack of polish is troubling and could be a deal-breaker for some. 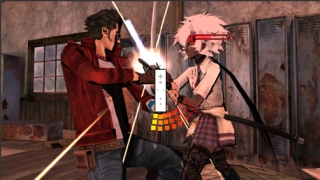 Boss battles are awesome and end in a suitably bloody fashion.


No More Heroes is practically unmatched when it comes to style. Everything from the text boxes for dialog to the outrageous blood sprays has gotten a Suda-approved makeover. The graphics sport a cel-shaded look that fits the games attitude perfectly and the character designs for the assassins are as flat-out cool as they could possibly be. The visuals dont miss a beat from a creative standpoint, but they are somewhat lacking from a technical one. The biggest offender is the erratic framerate, which can change from liquid smooth to noticeably choppy simply by panning the camera around a room. It never becomes bad enough to render the game unplayable, but it does detract from the overall experience. The city of Santa Destroy has much less detail than when Travis is indoors, and this too comes off as looking a bit sloppy.

The aural presentation is fantastic across the board. The soundtrack is excellent and the voice acting is pitch-perfect. The actors really convey their characters personalities and it makes the cut scenes that much more entertaining to watch. The game even has some small touches like where Sylvia calls you on your cell-phone and you hold your Wii remote like a phone to listen to her. The sound effects are quite satisfying in combat and there are a number of old-school, 8-bit sound effects that lend the game yet more uniqueness.

This is a game that will only appeal to a very specific audience. No More Heroes is anything but mainstream, and those expecting GTA with beam katanas will be sorely disappointed. The lack of polish is also going to be a significant issue for some. For those who are willing to look past that, though, and who want an extremely enjoyable beat-em-up with blood by the bucketful, NMH will absolutely fit the bill. If you do find yourself in that category, you'd be hard-pressed to find a more enjoyable game. Or a bloodier one.
4/5

If you enjoyed this No More Heroes review, you're encouraged to discuss it with the author and with other members of the site's community. If you don't already have an HonestGamers account, you can sign up for one in a snap. Thank you for reading!

© 1998-2021 HonestGamers
None of the material contained within this site may be reproduced in any conceivable fashion without permission from the author(s) of said material. This site is not sponsored or endorsed by Nintendo, Sega, Sony, Microsoft, or any other such party. No More Heroes is a registered trademark of its copyright holder. This site makes no claim to No More Heroes, its characters, screenshots, artwork, music, or any intellectual property contained within. Opinions expressed on this site do not necessarily represent the opinion of site staff or sponsors. Staff and freelance reviews are typically written based on time spent with a retail review copy or review key for the game that is provided by its publisher.