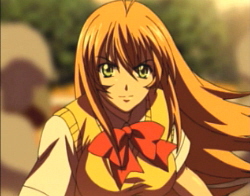 A year or two ago, while flipping through various manga at my local comic shop, I ran across Battle Vixens. It was exactly what the title suggests: a comic about a bunch of DD-cup ladies running around beating people up. Their school uniforms had an unusual tendency to fall off or even explode; it's interesting how womens' clothing always seems less durable than mens' attire in these tales.

It looked pretty stupid. I bought the new issue of Berserk instead.

Little did I realize that Battle Vixens was intended as a modernist re-enactment of the classic Romance of the Three Kingdoms, except with a bunch of high school students instead of a bunch of bad-ass Chinese warriors. So, even though it looks like the manga equivalent of an exploitative chick fighter, it's actually a daring social commentary on the events that shaped a nation. Lo and behold, someone decided this would make for great television, and so it was adapted into a 25-episode series (split across two seasons) while epics like Gunnm and RG Veda only got 60 minutes apiece. But I'm not bitter.

For those of you who are wondering what Battle Vixens has to do with anything, that happens to be the English name for the Ikki Tousen manga, also known as "Bakunyu Hyper-Battle". (If you're wondering what "Bakunyu" means, it basically means "huge breasts prone to frequent lactation". If you weren't wondering, then I apologize for putting that image in your head.)

Since the anime and manga were both successful, Marvelous Interactive -- normally a competent developer -- decided to produce one of the crappiest 3D brawlers I've ever played, and believe me, I've played quite a few brawlers. Once upon a time, I wouldn't have been surprised. "Oh look, another rotten video game based on a Japanese cartoon," I'd have said. But then Namco Bandai started releasing a bunch of great anime-to-game conversions, so I had to stop talking to myself.

Unfortunately, this isn't a Namco Bandai game; this is Ikki Tousen: Shining Dragon, the story of eight busty schoolgirls, each the embodiment of a Chinese warlord, who fight each other for the future of Japan. So as to give the game a plot without stepping outside the bounds of the anime, Marvelous introduced a mysterious and disposable girl named Chousen, who is able to disguise herself as other combatants. However, unlike Mortal Kombat's villainous Shang Tsung, Chousen's shapeshifting is a storyline gimmick; it's not something she can actually do during battles.

So, part of the time, the girls are fighting each other . . . and part of the time, they only think they're fighting each other! This creates a lot of angst and drama, but never enough angst or drama to actually stop anyone from kicking the shit out of their best friends. It also makes Chousen look like a big wimp, because after you beat up a buddy, it's often revealed that you actually defeated Chousen. She'll spit out some arrogant commentary and run off, but the point still remains: you whooped her ass.

Think about it -- if you pummeled Shang Tsung three or four times before reaching the end of Mortal Kombat, how seriously would you take him as a final boss? 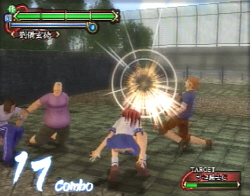 Marvelous Interactive doesn't expect you to think about that. This is not a game that demands heavy thought. For comparison, let's take a look at Dynasty Warriors 3, which happens to be based on . . . Romance of the Three Kingdoms. In that game, you've got a sprawling world map to explore (including multi-tiered castles), hundreds of opponents to slaughter en masse, allies to protect, enemy generals to defeat, and specific goals to accomplish to achieve "true" victory. You can also ride horses or elephants. On the negative side, there's a lot of graphical pop-up, and the battles can become repetitive.

In Shining Dragon, you're assaulted by a couple dozen goons in a single, enclosed room. There are never more than five on the screen simultaneously. You won't protect any allies, there are no goals to accomplish other than "kill everyone", and you won't ride any horses (let alone elephants). Even with the reduced opponent count, there's still graphical pop-up. As for the fighting, it's absurdly repetitive; your character auto-aims her attacks, so all you have to do is press SQUARE over and over.

Lots of reviewers say the same thing about Dynasty Warriors. "All you do is mash SQUARE!" However, what those reviewers really mean is, "All you do is turn to face your enemies, mash SQUARE to kill them, then run around until you find some more enemies!" In Shining Dragon, you don't have to turn to face anyone; the game does that automatically. You also don't have to find anyone to kill; they'll all masochistically run headfirst into your fist or foot. Just keep tapping that SQUARE button. The Marvelous combat engine will handle the rest!

The auto-aiming is probably intended to compensate for the absence of automated camera movement.

After slaughtering dozens of clone schoolboys, clone schoolgirls, or clone punks, there's a one-on-one battle against a non-generic character -- someone with an actual name. Even though this part looks like a 3D fighting game, it still plays the same. There's no jumping. No sidestepping. No parrying. There's not even any grappling (which is a glaring omission since, in the anime series, some characters specialize in grappling attacks). The only extra thing you can do here is a power move -- the command is the same no matter which character you're using -- that shreds the opponent's clothing. The power move also splatters some fancy text across the screen. 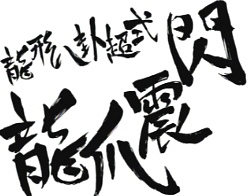 I suppose exploding clothing is an interesting perk, but it was more interesting when SNK did it. In addition to bursting shirts, Art of Fighting had fluidly-animated sprites that actually bruised, neat lighting effects, and distinct movesets for each character. It wasn't the world's greatest fighter, but at least it demonstrated some effort. Shining Dragon, which has none of those things I just mentioned, is an effortless anime cash-in that doesn't show even an ounce of the heart or spirit that went into the long lineage of brawlers and fighters that came before it.

Now here's the ultimate question: will this game's target audience be satisfied? I suppose that depends on who the target audience is. If we're talking about Romance of the Three Kingdoms fans, then they're already playing Dynasty Warriors. If we're talking about people who want to see scantily-clad females, then . . . no. No, Shining Dragon's target audience will NOT be satisfied. After a girl's clothing is knocked off, there's no replay feature, picture mode, or anything else to take advantage of the whole "shredded clothes" concept. The only way to get a good look at skin is to:

1) Let the enemy beat you up until their rage bar fills.
2) Let the enemy perform their power move on you, therefore shredding your clothing.
3) Hope you survive.
4) Have a miraculous comeback and win the battle.
5) Electronically record your victory animation and the ensuing picture, because a bunch of text is about to cover it up.

I've generously done all of that for you. -> CLICKIE <-

Ikki Tousen: Shining Dragon is a terrible game about a bunch of DD-cup ladies running around beating people up, and it doesn't even do a decent job of showing off their DD cups. If you're looking for a decent import brawler, I suggest you buy Berserk instead.

If the main game isn't enough pain, then you can purchase the limited edition and get something even worse!

If you enjoyed this Ikki Tousen: Shining Dragon review, you're encouraged to discuss it with the author and with other members of the site's community. If you don't already have an HonestGamers account, you can sign up for one in a snap. Thank you for reading!

© 1998-2021 HonestGamers
None of the material contained within this site may be reproduced in any conceivable fashion without permission from the author(s) of said material. This site is not sponsored or endorsed by Nintendo, Sega, Sony, Microsoft, or any other such party. Ikki Tousen: Shining Dragon is a registered trademark of its copyright holder. This site makes no claim to Ikki Tousen: Shining Dragon, its characters, screenshots, artwork, music, or any intellectual property contained within. Opinions expressed on this site do not necessarily represent the opinion of site staff or sponsors. Staff and freelance reviews are typically written based on time spent with a retail review copy or review key for the game that is provided by its publisher.