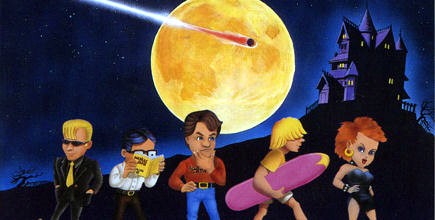 Every fan of awesome graphic adventures knows that Maniac Mansion is one of the all-time classics of the genre and that it cant possibly get any weirder than it already is. However only one of these statements is actually true! While 1990 saw an excellent NES conversion that was developed in-house by LucasArts themselves, publisher Jaleco had actually created their own Japanese-only version two years before. And as we all know, whenever you get Japanese programmers and tentacles together, mayhem is sure to ensue. 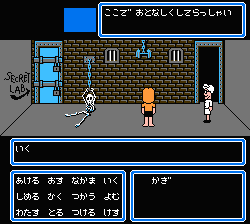 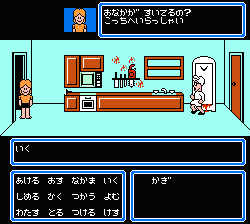 Unfortunately, when I say mayhem I mean it in a completely negative sense. The once large and impressive graphics have apparently been exposed to a Diminuator Ray, as both the house and its inhabitants are relegated to a small window. There isnt any scrolling either, so the larger rooms and halls have either been greatly condensed or broken up into multiple screens, while Dave and friends have been reduced to cute little munchkins with giant smiles plastered on their faces. The same cutesy makeover applies to everything else as well, whether its the bleached skeleton chained up in the dungeon, the man-eating flytrap, or intergalactic peace officers. Their apparent good humor never fades, either; kill everyone off and we find the group floating in the heavens complete with little halos. Perhaps most baffling of all, Dr. Fred is now a kindly-looking old man whose captive Sandy, the formerly cheap-looking cheerleader, wears pigtails and a black jumper. I blame the Japanese education system.

I also blame the sound team; despite a respectable take on the opening theme, the rest of the music is incredibly out of place. In addition to the ever-present sounds of scuffling shoes, your partys explorations are accompanied by three sluggish, repetitive tunes that I suspect of containing subliminal messages to mess with the nuclear reactor in the basement and blow the house to kingdom come. Pausing the game, on the other hand, strikes up a cheerfully annoying ditty that conjures up images of being put on hold after calling the Nintendo company hotline. Maybe the various computer versions didnt have much in the way of music, but thats no excuse for slapping together a cluster of mismatched cues that sound like they belong in a completely different game  preferably one far, far away. 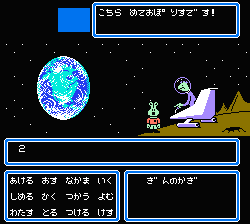 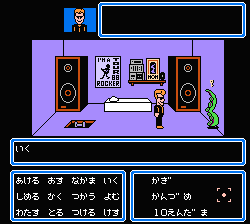 Thats not to say that everything has changed. Most of the risqué material cut from the NES has been left intact; squint hard enough and you too can be offended by classical nude sculptures and ancient Egyptian swimsuit calendars! Of course it just wouldnt be Maniac Mansion without microwaved rodents, yet ironically enough this scene is actually less graphic than the censor-approved American version. Unfortunately the cursor doesnt automatically pick up on hotspots unless you click on them first just as in the original, which makes navigating the mansion a lot more cumbersome. And speaking of cumbersome, instead of springing for battery-backed memory Jaleco harkens back to the good old days with a password system thats a whopping 104 characters long. Take out your pencils, children  I hope you remembered your scrap paper!

Starting to feel a little scared? At least the language barrier neednt frighten you; the text consists entirely of hiragana and requires little effort in translating the command verbs and inventory that make up the heart of the game. Well, unless you have absolutely no understanding of Japanese; I guess that would kind of suck even though the solutions are all the same other than a minor difference with the Japanese postal system. But ultimately theres very little reason to play this unless you want to see the inexplicable results of an American adventure game being completely reprogrammed for a very different audience  and not very well. Otherwise your experience is probably going to go over something like this: 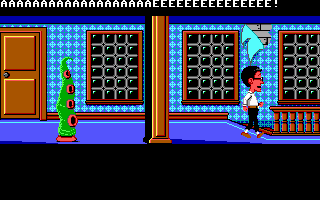 If you enjoyed this Maniac Mansion (Famicom) review, you're encouraged to discuss it with the author and with other members of the site's community. If you don't already have an HonestGamers account, you can sign up for one in a snap. Thank you for reading!

© 1998-2021 HonestGamers
None of the material contained within this site may be reproduced in any conceivable fashion without permission from the author(s) of said material. This site is not sponsored or endorsed by Nintendo, Sega, Sony, Microsoft, or any other such party. Maniac Mansion (Famicom) is a registered trademark of its copyright holder. This site makes no claim to Maniac Mansion (Famicom), its characters, screenshots, artwork, music, or any intellectual property contained within. Opinions expressed on this site do not necessarily represent the opinion of site staff or sponsors. Staff and freelance reviews are typically written based on time spent with a retail review copy or review key for the game that is provided by its publisher.