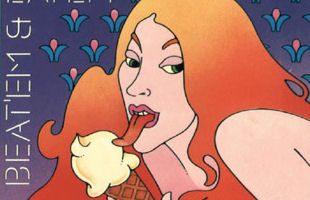 Ah yes, Beat Em & Eat Em. I remember well the day I took this cart home: gathering up five of my bravest warriors, we pulled out the longboat and set sail for the local Gamestop. The rather shady-looking clerk indicated that this was an excellent choice as he revealed its sordid leather case from beneath the counter, so I kneed him in the ghoulies while my crew put the remaining men to the sword. After emptying out the register, ravishing the women, and proceeding to set fire to the building, we left naught but flaming wreckage behind us, eagerly anticipating a long night of drink, dance, and hot Atari porn. Then we realised that wed forgotten to take the game along, so we had to head back in search of another store. Oh how we laughed. Unfortunately the joke was ultimately on us, as Beat Em & Eat Em totally sucks  and NOT in the way we were hoping. 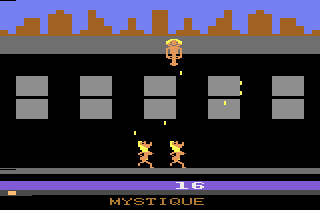 Taking control of two blocky blondes in the nude, youre supposed to gulp down falling drops of semen being spurted from the freakishly endowed man lurking in the rooftops. Of course this is on the 2600, so his mammoth member actually looks more like a giant nose complete with itty bitty eyes; but while the graphics might have been good for their day, youre not going to find them the least bit arousing unless youre an utter twat. After catching all that mangoo in their dirty smutgobs, these lustful ladies then lick their lips in appreciation of a job well done, revealing FIVE OCLOCK SHADOWS? I certainly hope those are just collagen injections gone horribly wrong, or the smiling cumcannon up there is going to go through life awfully confused. 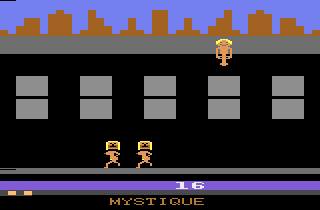 Perhaps even more disturbing is the fact that this so-called seed appears to consist of tiny yellow little droplets. I dont know about you, but whenever Im ejaculating onto a busy street it resembles a gushing MENS BEAM of justice, not the pooped-out pecker of a man who just drained his snake when no one was looking. But lets ignore the disgusting premise for a minute and get down to the all-important GAMEPLAY. Catching these dubious droplets is almost instantly impossible because the game speeds up to ridiculous levels within minutes, ensuring that the sky will crack with thunder as God gets quite irate. Each oh-so-brief round also begins with the theme from the 2600 version of Pac-Man, proving once again that Atari forged that port in the bowels of Hell itself. 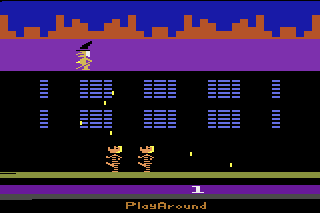 CONCLUSION:
While on one hand (haha) Mystique is promoting godless onanism and shall burn in the lake of fire for all eternity, I must commend them for avoiding their usual mix of copulation, rape, and dick-devouring alligators. It is a well known fact that oral sex doesnt count as intercourse, so kudos to these nubile nymphs for retaining their maidenhood. Perhaps in the hopes of reaching out to a broader audience, the developer later released Philly Flasher, a role-reversal in which two naked men choke down the lactations of a haggard old witch, causing their penii to dribble in victory. Oddly enough it failed to bring in the ladies. It is therefore this reviewers opinion that youd be a lot better off playing a far superior game that Mystique is failing miserably at ripping off, Activisions Kaboom! But then youd be better off playing with practically anything besides this, including yourself.

If you enjoyed this Beat 'Em & Eat 'Em review, you're encouraged to discuss it with the author and with other members of the site's community. If you don't already have an HonestGamers account, you can sign up for one in a snap. Thank you for reading!

© 1998-2022 HonestGamers
None of the material contained within this site may be reproduced in any conceivable fashion without permission from the author(s) of said material. This site is not sponsored or endorsed by Nintendo, Sega, Sony, Microsoft, or any other such party. Beat 'Em & Eat 'Em is a registered trademark of its copyright holder. This site makes no claim to Beat 'Em & Eat 'Em, its characters, screenshots, artwork, music, or any intellectual property contained within. Opinions expressed on this site do not necessarily represent the opinion of site staff or sponsors. Staff and freelance reviews are typically written based on time spent with a retail review copy or review key for the game that is provided by its publisher.