She undid the zip and my excited penis popped up

It may lack all the gratuitous features that youve come to expect from modern-day wankathons, things like animated insertions, yelping Chihuahua girls, and running in Windows without being spat out like a mouthful of manseed  but True Love is universally hailed by perverts across the globe as a bona fide classic.

A stunning departure from the norm!

My penis is already big and throbbing, wanting a place to settle

And its only natural that Daisuke (said nerd) should be hung like a French landmark, because hes a college student in his senior year. Of college. Theres nothing hed enjoy more than a quick roll in the hay with his fellow college students, because when youre in college its okay to do wacky college things. Things like studying for exams so you can get into a good . . . university. It certainly is reassuring to know that theyre not teenagers in high school because that would be morally WRONG, especially since Daisukes principal hobbies seem to consist of hiding dirty magazines under his bed, peeking into the girls changing rooms, and getting hot for teacher. All we really need to know about our heros education is that he has Miss Yumi for Biology, but hes more interested in the topography of those rocky mountains. Im talking about her breasts.

I stimulated the berry and glided my finger into the opening below it, which was filled with love juice and expectation

But dont let go of your pencil just yet, because theres still nine more stereotypes to satisfy your depraved needs including:

Unfortunately while each girl is interested in certain attributes, a large portion of this setup is essentially dumb luck. Time and time again youll also have to choose a certain activity at a certain time of day within a certain time frame to trigger various run-ins with that special someone; and not only is your success rate seemingly random even if you meet these requirements, there arent any clues to help you out either. That said, with a FAQ you could manage to squeeze virtually every one of these ladies into a single playthrough, so its not like this game is complex or anything  but I did appreciate the secret reward for loafing around all day:
Im the patron saint of lazy bums. Who gives a shit about being serious? Do your best to be as lazy as ever! Dont make an effort to live a life, just relax and take things as they come. Im gonna give you a special power! Keep up the good work.

From the rolling hills down to her valley, her secret place was already wet

Oi luv, hows about coming down to the flat for a bit of the old humpnbump on me creamstick?
Wanker! Do us a favour and jump in front of a lorry, cheers. (Oi oi oi, we are in college!)

No no, wait. I have a confession to make; the above isnt a very accurate depiction of in-game social intercourse at all. I used punctuation in it.

Of course just because its actually playable and called true love doesnt mean that the perversion merely extends to the text  the whole game is filled with tasteless degenerate 640x400 FILTH. Our heros dates always suffer from low self-esteem and feelings of dirtiness, so obviously he has to lift their spirits by extending his alien object into their glistening pearls. All these tawdry encounters follow pretty much the same script: sucking on a dainty pair of nipples, inserting his tongue into her honeypot, introducing her perfumed well to his well grown part after she takes a few paragraphs to admire it, and then onto the MONEY SHOT. Oh, and despite all this flowery prose about forests and valleys, everyone is completely hairless down there.

I do have to give them credit, though  theres absolutely no rape, sadist humiliation or shadowy alternate personalities that love enemas, just good old-fashioned splurting cockmonsters like Mom used to make. Too bad that slackers never up to finishing the job; hes always pulling out at the last second to spray steaming hot manchowder all over his partners face and chest. Thats just impolite. 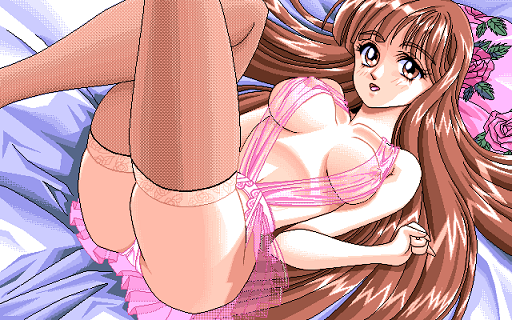 I still want to feel you all over me

If you enjoyed this True Love review, you're encouraged to discuss it with the author and with other members of the site's community. If you don't already have an HonestGamers account, you can sign up for one in a snap. Thank you for reading!

© 1998-2021 HonestGamers
None of the material contained within this site may be reproduced in any conceivable fashion without permission from the author(s) of said material. This site is not sponsored or endorsed by Nintendo, Sega, Sony, Microsoft, or any other such party. True Love is a registered trademark of its copyright holder. This site makes no claim to True Love, its characters, screenshots, artwork, music, or any intellectual property contained within. Opinions expressed on this site do not necessarily represent the opinion of site staff or sponsors. Staff and freelance reviews are typically written based on time spent with a retail review copy or review key for the game that is provided by its publisher.