As their only Famicom Disk game that wasnt released on cartridge for the US, Capcoms Samurai Sword has the potential to be one of those awesome lost gems that are always being discovered thanks to the horrors of emulation. Personally I recommend that you just look at all the screenshots and keep on thinking that, because whatever crazy scenarios your imagination comes up with are almost certainly going to be a whole lot cooler than the real thing. 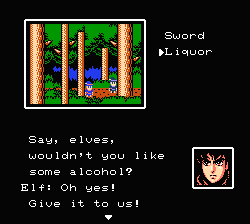 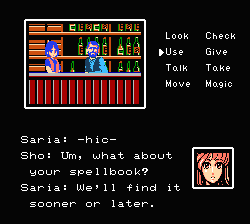 Even if you dont mind the fact that its a traditional Japanese graphic adventure  you look at everything on the screen until the descriptions repeat, then check them, and then usually look at them some more until a new option opens up  this is still a pretty weak example of one. The bland graphics are tucked away in a practically microscopic window, and other than a few humorous situations like plying the local elves with booze, for the most part youre on an utterly generic fantasy quest to kill some big bad foozle over the course of four very brief chapters.

The puzzles are just as dull; not only are the solutions pretty obvious, but theres really little else you could even try since each area is so tiny and linear. The fake combat sequences arent much better since your weapon typically breaks in the first round, forcing you to either look at the enemy a bunch of times for a weak point, run away to go solve another straightforward inventory puzzle, or have your wizardly companion cast one of her three spells. That said, if you do find yourself stumped its usually for a really stupid reason. 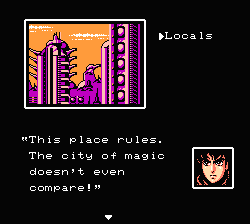 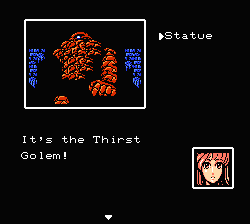 At one point my hero got stuck in the desert because every time I told him to head east he would instead pick up a nearby lens (except that it wasnt actually added to my inventory), because apparently I had to go back and notice that my alcoholic wizard was paralyzed with fear and unable to lend a hand against a zombie wed already unsuccessfully battled earlier. Getting past the guard to the City of Technology required me to just sit there and do nothing until he simply got up and left (!), allowing me to wander aimlessly back and forth between the next three screens until eventually a dragon decides to show up. Man, faced with excitement like that the City of Magic DOESNT EVEN COMPARE!! But the worst was that infinite corridor to nowhere that I had to walk down before thoroughly examining one of the nondescript pillars in the previous room until it finally turned out to be a MAGICAL nondescript pillar.

As if all that wasnt bad enough, Capcom even had the gall to make a game called Samurai Sword that features absolutely NO appearances of samurai, ninjas, or hot babes in bikinis wielding Japanese steel. Such a supremely dishonorable act is no doubt what really kept this game from our shores in favor of the way better and even more psychotic Princess Tomato in Salad Kingdom. Well, that and presumably because someone at Nintendo of America enjoys peeking at anthropomorphic oranges in the shower. 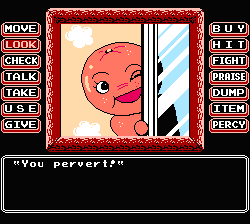 If you enjoyed this Samurai Sword review, you're encouraged to discuss it with the author and with other members of the site's community. If you don't already have an HonestGamers account, you can sign up for one in a snap. Thank you for reading!

© 1998-2021 HonestGamers
None of the material contained within this site may be reproduced in any conceivable fashion without permission from the author(s) of said material. This site is not sponsored or endorsed by Nintendo, Sega, Sony, Microsoft, or any other such party. Samurai Sword is a registered trademark of its copyright holder. This site makes no claim to Samurai Sword, its characters, screenshots, artwork, music, or any intellectual property contained within. Opinions expressed on this site do not necessarily represent the opinion of site staff or sponsors. Staff and freelance reviews are typically written based on time spent with a retail review copy or review key for the game that is provided by its publisher.