Whether hes being portrayed by Christopher Lee or George Hamilton, one simple fact remains the same: Count Dracula is historys greatest pimp. Sadly, most games are so fixated on silly things like drinking blood or getting whipped by men in leather that they overlook our heros slick sophistication, excellent dancing skills, and long, hard . . . fangs. Fortunately Brides of Dracula corrects this grievous error by not only letting you play as crotchety Dr. Van Helsing, but also the Bodacious Bloodsucker himself as he prowls Transylvania looking to pick up chicks. 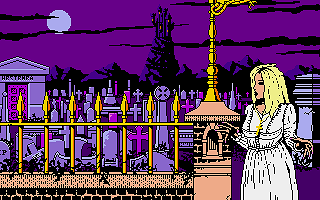 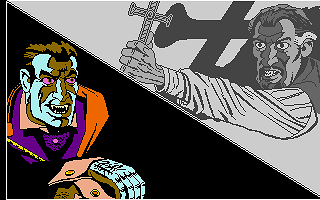 Hence after watching the stylish Hammer-style introduction its time to decide whether youre going to champion the forces of good or sell your soul to Satan in exchange for tawdry thrills  then once you say yes Satan, please accept my soul, youll rise from the crypt in search of innocent maidens to condemn to an endless existence in darkness. Of course if you should accidentally choose the good doctor, youll instead wander about the local village gathering up such traditional anti-vampire paraphernalia as crosses, holy water, and garlic toast.

Yet despite the presence of nude statuary, pentagrams galore, and a torture chamber complete with bladed pendulums slowly descending towards their helpless victims below, this game feels rather more like a Monty Python sketch than straight horror. Perhaps its the way Van Helsing marches along with a ridiculous slouch, or Draculas habit of sproinging into the air with a series of acrobatic flips. Maybe its the giant caterpillar smoking a hookah. No, its probably the high-tech laboratory filled with laser-wielding robots thats going to convince you the developers werent taking things overly seriously when they penned this particular chapter of vampire lore.

What they did take seriously was the gameplay: the screens always split in two because your rival starts on the opposite end of the map, simultaneously attempting to find all of his own objectives. Yes, even as Van Helsing is busy raiding churches, taverns, and toasters for his tools of the trade, Dracula is getting busy with nubile blondes and turning them into his vampiress slaves! Since theyre scattered across the entire map, as the game progresses youll both have to stray increasingly far from your own side and frequently cross paths (and possibly fists). And while theyre pretty small with the playing field cut in half, the graphics are still pretty cool  the waning light of the sleepy village gradually darkens into a gloomy swamp complete with a robed ferryman until you finally reach an army of zombies and wolves prowling the tombs outside Draculas castle. 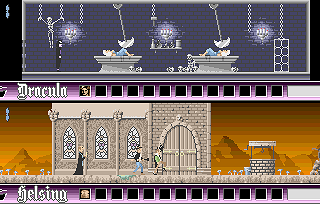 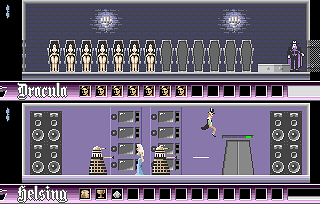 Unfortunately this gameplay also gets old pretty quickly. Once you pick up an item or undead bride, you have to walk all the way back to your starting point and drop it/her off before you can get another, simple enough at first but increasingly monotonous the further you have to go. Other than a strictly one-way portal that takes you deep into your enemys turf, theres only one basic route linking the village with the castle, so theres no variety in between locating your next objective other than avoiding the swarms of brigands, monsters, and vampire hunters that litter each leg of the trip. On that note, its not uncommon for the computer to lose all its lives right in the middle of the game, which is certainly fair but not particularly climactic.

Yet as straightforward as it is, the humor and cheeky premise of this little outing make for a fine midnight snack  not unlike a stupid monster movie at one in the morning, or a comely lass in an underwired nightdress.

If you enjoyed this Brides of Dracula review, you're encouraged to discuss it with the author and with other members of the site's community. If you don't already have an HonestGamers account, you can sign up for one in a snap. Thank you for reading!

© 1998 - 2022 HonestGamers
None of the material contained within this site may be reproduced in any conceivable fashion without permission from the author(s) of said material. This site is not sponsored or endorsed by Nintendo, Sega, Sony, Microsoft, or any other such party. Brides of Dracula is a registered trademark of its copyright holder. This site makes no claim to Brides of Dracula, its characters, screenshots, artwork, music, or any intellectual property contained within. Opinions expressed on this site do not necessarily represent the opinion of site staff or sponsors. Staff and freelance reviews are typically written based on time spent with a retail review copy or review key for the game that is provided by its publisher.