I, Damiano is a text adventure  and not a very good one. But even if the graphics are rudimentary CGA, the sounds are ear-piercing bleeps, and the parser is dumb as bricks, they have nothing on the fact that this harmless little adventure is actually writhing beneath the sinister coils of SATAN.

For instance, youll note that the cover displays a muscular, broadsword-wielding barbarian locked in combat with a snarling dragon whilst a helpless maid sprawls at their feet. This is somewhat interesting because the titular protagonist is in fact a frail, homely witch who flings unholy hellfire from his staff, and you dont actually kill the dragon per se; you give him a book of love poetry so he can put the moves on your ex-girlfriend. Such base deceit can only be the work of Lucifer, Prince of Lies! 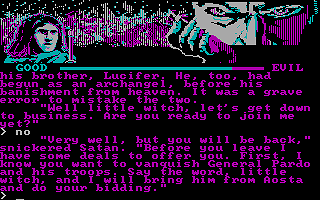 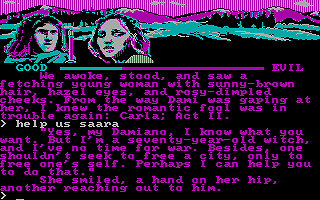 But if you want something a bit more concrete, theres the fact that in order to win you have no choice but to repeatedly type ADES SATAN and conjure up Beelzebub himself, carelessly tarnishing your immortal soul in exchange for forbidden knowledge in the dark arts! That is, when youre not otherwise occupied slaughtering puppies or bedding thy neighbors wife, which technically isnt adultery since first you have to kill thy neighbor. Somewhere in the midst of all this frivolity are cheery themes like wholesale genocide, illicit sex, and an epidemic of the Black Death; this is of course followed by folk dancing, because Damiano is a very complex individual.

Hes so complex that the game keeps track of his spiritual wellbeing with a handy meter thats constantly changing based on your actions  typically for the worse. However its not as if you have much control over this; since these shifts are actually mandatory due to the puzzle solutions, its really just a convenient way to force you into having to start over a lot. The game ends instantly if you ever fall too close to the dark side, and while youll sometimes regain some goodness by successfully overcoming a puzzle, most of the time youll find yourself being dragged back towards the edge.

Thats because most of these puzzles are solved by casting one of Damianos three spells: the power to wield fire, the power to inspire terror, and the power to damn innocent souls to an eternity of suffering (which apparently hurts but otherwise doesnt seem to faze your victim all that much). Besides wasting a turn, casting the wrong spell is always considered an evil act, which is incredibly frustrating since its often unclear or illogical which of the three to use. This is especially true in the combat sequences, but why does damning a cow terrify it into producing cheese? The real kicker, though, is that its not uncommon for even the correct one to shift you towards evil, so a duel that requires multiple spells can really come back to haunt you later if you didnt get them right the first time. 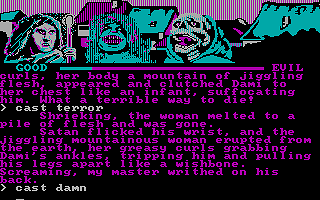 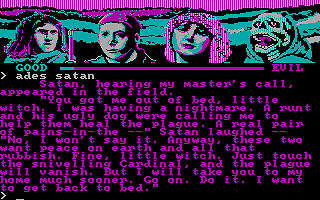 Adding insult to injury, saving the game punishes you with a slight evil shift, so you cant even rely on Sierras Save Early, Save Often mantra. And it would have been nice to have the option of saving regularly, because every time you travel to a new location youll stumble into a series of random encounters that can either salvage or destroy your chances of ever making it to the end. Perhaps an old priest on the road offers to bless you  allowing him to do so might give you back a chunk of goodness OR cause him to suddenly transform into a gloating Prince of Darkness, who then steals even more of it away! And then there was that time a bunch of ruffians threw me in a hole because none of Damianos magic did anything (besides the usual alignment penalty, of course) and Satan had to dig me out. How very embarrassing.

Or how about the way that fork-tongued liar Satan will offer you the Terminus spell on several occasions, which actually results in your immediate death  except for the last time, when you can and must accept it, with no explanation given. Even the rare inventory puzzle can lead to ridiculous situations like when youre trying to help the aforementioned dragon with the ladies and merely type give book, which causes Damiano to hurl it over a cliff.

While having to rub elbows with demonic servitors plucked from the bowels of Gehenna is certainly unique enough to merit a glance, sadly the gameplay of I, Damiano pales in comparison to better mature interactive fiction like Leather Goddesses of Phobos, The Lurking Horror, or even Hound of Shadow. If youre going to have your soul devoured by the undying forces of darkness, youd probably be better off having your ankles licked by scantily-clad succubi  but if youre an old-school adventure fan with a taste for the occult (and masochism), by all means:

If you enjoyed this I, Damiano review, you're encouraged to discuss it with the author and with other members of the site's community. If you don't already have an HonestGamers account, you can sign up for one in a snap. Thank you for reading!

© 1998 - 2022 HonestGamers
None of the material contained within this site may be reproduced in any conceivable fashion without permission from the author(s) of said material. This site is not sponsored or endorsed by Nintendo, Sega, Sony, Microsoft, or any other such party. I, Damiano is a registered trademark of its copyright holder. This site makes no claim to I, Damiano, its characters, screenshots, artwork, music, or any intellectual property contained within. Opinions expressed on this site do not necessarily represent the opinion of site staff or sponsors. Staff and freelance reviews are typically written based on time spent with a retail review copy or review key for the game that is provided by its publisher.