Every gamer has this part of them that compels them to find an obscure game and hoist it out there for the world to see. "This is my special find," we seem to say, "You haven't played videogames until you play this game, which, in your ignorance, you haven't yet played or even heard of."

The problem is, most great games aren't secrets. So we often absurdly boost weak titles that have for us some idiosyncratic appeal, and we swear that the appeal is universal.

Import shooters represent the most common and extreme example of this illogical treasure hunting. There are stories of blind children gathering in clandestine circles to worship Darius Alpha before towering and crumbling obelisks. Ginga Fukei Densetsu Sapphire is another one of the most fiercely hunted treasures. Here's where things get interesting: Sapphire actually is great. 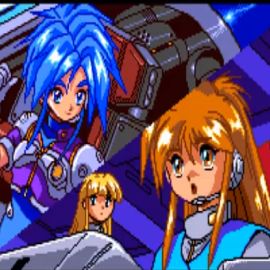 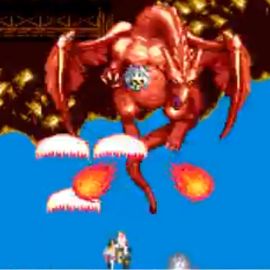 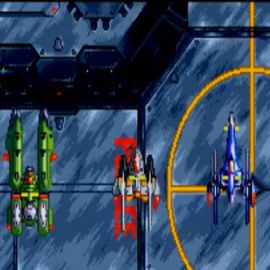 Forgoing the very worthless and very Japanese story, Sapphire's got four anime police babe pilots to choose from (this isn't unique, but it's an early sign of greatness!), each prepackaged with her own ship. On the pilot select screen, two of them are angry, one is sultry, and one has the helpless, 'I want to be raped' face common to most stars of hentai. But she's the one who does the raping--her ship is super fast, and its weapon set has the best coverage. Selecting her makes the game play fast, but too easy. This flaw isn't exactly fatal though--luckily for us we can simply select a higher difficulty level if we want to use her.

Playing with the other girls (:D) reveals that the game is paced relatively slowly, like most 16-bit favourites, and not at all like today's arcade bullet-tempests. Sapphire's outstanding music is another hallmark of shooters of its time. But what really elevates the game above your everyday Super Star Soldier is how hard the music rocks, and how well the rocking music works with general weirdness of the game.

Oh, and one other thing. 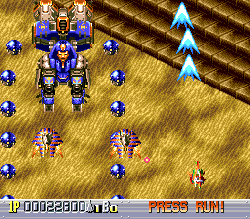 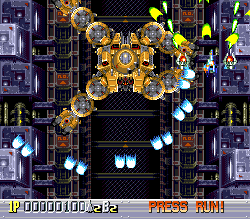 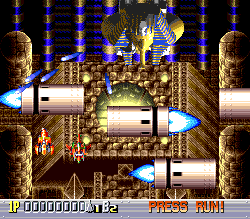 First, to what is admirable. Expect bosses to be weird, and wonderful: from a spinning Sphinx to a whirling spacecraft-cum-crab. Expect bosses to rock your screen and moisten your controller with multiple forms and attacks to the tune of blazing guitars, percussion, lasers, bullets, beams. When bosses die, they are consumed by hellfire, exploding in red rage, burning your screen scarlet.

My personal favourite is the face which emerges from the quiet background to exfoliate polygonal debris on your ship and whip tentacles of white fire and transmogrify into a skull before flashing death. Sapphire's boss encounters achieve a rare synaesthesia when the screen's energy seems to swell before raging, and the stirring song furnishes for us an anthem by which to remember the moment. Later, it is these moments that will come to your mind, by which to remember the whole.

Unfortunately (here comes that inconsistency), the Sapphire experience also includes weirdness which isn't so exciting. There are 'enemies' which are just shapes that hurl themselves at you, as if from the pages of a child's geometry textbook. But, to be fair, most of the oddball cast of enemies are actually cool, ranging from heavily armed dirigibles, to dragons bursting out of paintings, to a giant turtle careening around the screen tucked away in his shell.

My more serious gripe and argument for inconsistency would be that the overly ambitious graphics give the impression of taking in most of the game play, voyeur style, through your neighbour's dirty window. On one occasion I played Soldier Blade--a completely sprite-based game which is graphically much more typical for the time--directly after playing Sapphire, and it was like putting glasses on. 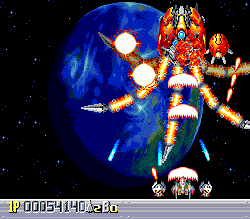 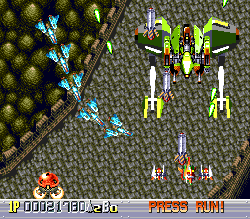 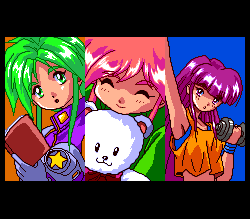 But despite the slightly grainy look and the cast of hit-or-miss enemies, there's not much to complain about here, and a whole lot to love. The mid and endboss encounters offer more than perfunctory connectedness to the regular level parts which lead in to them. They give the game real, meaningful intensity. There is passion in these meetings to culminate and mark each step toward finality; it's not often a game, especially in this simple genre, can evoke this kind of genuine emotion.

For a select audience. For those shoot-em-up treasure hunters willing to sell their Ford Focus to finance their latest 'find'. I would be remiss if I didn't point out that this game will disappoint: it won't drive you to work or school. But I know of few shooters that are better.

If you enjoyed this Ginga Fukei Densetsu: Sapphire review, you're encouraged to discuss it with the author and with other members of the site's community. If you don't already have an HonestGamers account, you can sign up for one in a snap. Thank you for reading!

© 1998 - 2023 HonestGamers
None of the material contained within this site may be reproduced in any conceivable fashion without permission from the author(s) of said material. This site is not sponsored or endorsed by Nintendo, Sega, Sony, Microsoft, or any other such party. Ginga Fukei Densetsu: Sapphire is a registered trademark of its copyright holder. This site makes no claim to Ginga Fukei Densetsu: Sapphire, its characters, screenshots, artwork, music, or any intellectual property contained within. Opinions expressed on this site do not necessarily represent the opinion of site staff or sponsors. Staff and freelance reviews are typically written based on time spent with a retail review copy or review key for the game that is provided by its publisher.