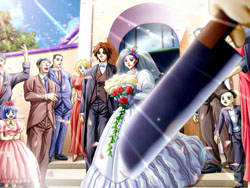 The Official Game Booklet for Gibo: Stepmother's Sin warns us that the fictional relationships in the game "do not necessarily demonstrate the full range of sensitivity, communication and intimacy necessary to sustain a real life interpersonal relationship." That disclaimer seems unnecessary to me. Even though he disrespects most women and thinks of them as nothing more than sperm receptacles, the hero -- Yusuke Yagami -- is very complimentary towards his new mother.

I'm being sarcastic, of course. Not only does the game lack sensitivity, but it explicitly goes out of its way to be the exact opposite.

Gibo only focuses on four characters. There's you (Yusuke), the titular stepmother (Misako), your new younger stepsister (Shiina), and your cousin who you regularly have experimental sex with (Mio). Your father is conspicuously absent due to his business travels, which gives you plenty of opportunities to put the moves on your new mother . . . or just shame her mercilessly. It's your call, really. Unless you don't want to do anything with her at all. That's simply not allowed.

You see, poor Yusuke had to experience that moment no one ever wants to experience: coming home and finding his mother in bed with another man. Well, actually, she was up against a wall . . . but she was enjoying it and drooling all over the place. Yusuke's father didn't much like this either, so he divorced her. Since then, Yusuke's basically grown up on his own, since his father is so often away on business. And he spends a lot of time nailing girls, especially his cousin Mio.

When a busty 37-year-old lady moves into Yusuke's house claiming to be his new mother, it's a bit of a shock for our hero. How can this woman suddenly arrive and pretend to be part of his family? It must be a trick! So, 20-year-old Yusuke sets his mind to an ignoble task: he will turn new mother Misako into his sex slave. He might do the same to his new 18-year-old sister, too, because Yusuke believes innocent young girls are actually sluts in training. So, when little Shiina gets all shocked by your morning wood, don't hide it! Spread your legs and proudly show off your erection -- that's Yusuke's way!

Yusuke: "See this erect penis? It's yours. To put in your mouth or in your pussy... whatever you like."

The whole situation is unfortunate because she's trying so hard to be understanding and friendly to win Yusuke over (like any good step-parent would), but Yusuke's just behaving like a total dick. He even makes Misako watch a video you recorded... of her DAUGHTER taking a shower and playing with herself!

You're pretty much condemned to follow this path even if you're a sane human who realizes that Yusuke is one totally sick and twisted individual. You'll always try to make Misako into your sex slave . . . your choice comes in whether you wash her back, or ask her to scrub yours. Or whether you force her to give you a blowjob, or convince her with words. The end result is the same, but the method to get there alters the course of the story by influencing Misako's LOVE and LUST meters. These all-important attributes affect whether you earn the "Happy Wedding" or "Dead Stripper" finale . . . or any of 12 other endings.

At first, I was quite put off by Gibo -- no matter what choices I made, I witnessed the same (or very similar) events that consistently treated sex as something two people do for simple animalistic pleasure. Call me a hopeless romantic, but I'm a fan of relationships based on love.

As I played more of the game and uncovered some of the harder-to-find scenes, I started to get Gibo's dark, twisted humor. It's hopelessly deranged, but it's obvious that the writers and translators are self-aware and playing the entire adventure up for laughs. If you go too far with your depravity and earn the "Size Matters" ending, there's no attempt to make a deep philosophical message about the evils of mistreating others. Your stepmother simply runs away and leaves a letter explaining that "you're just too big, and it hurts."

"What the hell? She left because my dick's too big?"

The art is all drawn quite nicely and the dialogue is translated with a bare minimum of grammatical errors. This is important because it's hard to take a game seriously when the translation is fraught with spelling mistakes and incorrect word usage.

If you enjoyed this Gibo: Stepmother's Sin review, you're encouraged to discuss it with the author and with other members of the site's community. If you don't already have an HonestGamers account, you can sign up for one in a snap. Thank you for reading!

© 1998-2021 HonestGamers
None of the material contained within this site may be reproduced in any conceivable fashion without permission from the author(s) of said material. This site is not sponsored or endorsed by Nintendo, Sega, Sony, Microsoft, or any other such party. Gibo: Stepmother's Sin is a registered trademark of its copyright holder. This site makes no claim to Gibo: Stepmother's Sin, its characters, screenshots, artwork, music, or any intellectual property contained within. Opinions expressed on this site do not necessarily represent the opinion of site staff or sponsors. Staff and freelance reviews are typically written based on time spent with a retail review copy or review key for the game that is provided by its publisher.