CHOMP.
We interrupt your regularly scheduled hentai review to bring you this special bulletin: giant monsters are cool. Hence the NeoGeo cult classic King of the Monsters made something of an impact when it stomped onto the scene with a cast of titanic rubbery horrors all pounding each other into submission over which one of them gets to eat Japan. Lets face it, who can honestly resist the sight of an overgrown fire-breathing lizard as it roars in triumph from atop the still-smoldering ruins of downtown Tokyo? Whats that  you can? Wow, it must be awfully rough to go through life without a soul.

Even so, had you seen this game in action during its prime you probably would have found it to be a flashy and impressive one. Armed with an array of punishing attacks and an appetite for destruction, SNKs six fearsome freaks of nature get to duke it out one-on-one right in the thick of sprawling Japanese cities from Kobe to Hiroshima. Vivid colors, rumbling music and booming sound effects all pump up this infectious carnage as once thriving populaces are reduced to charred wastelands of raging fires and thick smoke. Yes, the tiny buildings that dot these once peaceful landscapes are soon crunched flat as you tread about with barely a thought, while more sturdy structures like the skyscrapers, ferris wheels, and ancient snow-capped castles of Kyoto erupt into satisfyingly hefty explosions whenever someones sent careening through them. Meanwhile the entire Japanese military swarms about ineffectually; while fighter jets screech all around both combatants, you can snatch ruined vehicles off the ground or even pluck them out of the sky and then hurl your new toys at an unwary opponent. Go on, show them the little-known power of sharing with the horn-blasting bullet train that just wrecked itself upon your scaly feet, those cute little army tanks, or even suspiciously phallic laser cannons. 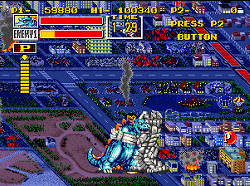 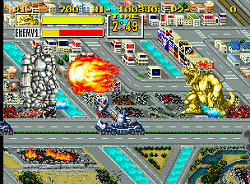 And in addition to the snarls and roars, each of the rampaging beasts that oppose your rightful dominance has its own distinct musical theme, whether synthesizer-laden rock or a dire-sounding chant set to pounding drums  or a liquidous musk of swamp creature funk. Im not totally sure what that last phrase actually means, but it (like the music) sounded pretty sweet. And who, you might ask, are the monsters in your neighborhood? Well besides the expected inclusion of Geon  regulation flame-spewing dinosaur as required by Japanese law  you can contend with the likes of a towering gorilla named Woo, the crusty fists of a Rocky stone golem, or the oozing slime-covered body of Poison Ghost. The aptly named mutant insect BeatleMania was always an arcade favorite, but we cant forget Astro Guy, this spandex-wearing spoof of Ultraman having been transformed into his current state by a megaton or two of radiation. Any of these behemoths await your choosing, but only one ridiculous cliché may emerge triumphant  or perhaps . . . two? Drag a friend along for the ride and the pair of you team up for a frantic four-monster melee and an even greater promise of excitement!

Until you cease merely looking and actually pick up the controls for yourself, anyway.

For that is when the other shoe drops. The fun you might have been expecting stumbles and falls flat on its toothy face thanks to a sloppy fighting engine that employs a variety of pro wrestling holds  and a seemingly random chance for success. Lets not even get into how dumb it is for Godzilla and gang to achieve world domination via the WWF playbook; I can think of plenty more relevant things to pick apart here. Like how very monster plays virtually the same: advance towards your foe, repeatedly tap one of the attack buttons and then hope for the best. Okay, so this does mean that anyone can play without needing to know any special moves or complex combinations, but it also means that theres little to no actual skill involved. One minute youre triumphantly punishing your opponent with a series of monstrous suplexes and skull-cracking piledrivers, perhaps briefly gnawing on his arm for good measure, only for the computer to suddenly break out of nowhere and proceed to dominate your every subsequent tie-up before sending you crashing to the continue screen. You can punch and kick without grappling, but such attacks do a negligible amount of damage and the computer usually wins such slapfights anyway, so instead players end up button mashing as they attempt to get their chosen character to stop sucking. But button mashing doesnt actually work  when youre winning it seems as if its all about the timing of your moves; the rest of the time youll claim that the AI is just plain cheating. 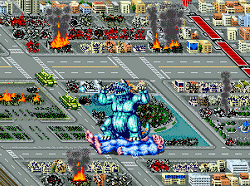 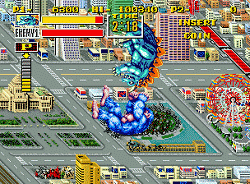 But I will give the game this  in the early goings things are decently entertaining because the AI cuts you a break. Its completely haphazard, but you can probably get through the first three or so bouts on a single credit and before you realize that you really dont want to play any more. The computer get increasingly annoying with each new battle, though, and since there only five opponents followed by a mirror match, the game then sends you off to fight even stronger versions of them all over again. Gosh, now theres a tantalizing incentive to continue playing and assume your place as the king of the quarter-munchers.

Ah yes, nothing like adding insult to injury. SNK obviously designed KOTM to fleece its audience of their money as quickly as possible  rather than merely ending with a depleted life bar, you have to pin the opposing monster for a three-count. Too bad your opponent isnt going to stay down even after losing all his health, not until youve attempted to pin him repeatedly and prolonged the fight to sometimes painful levels in the later rounds thanks to the wonky grappling system. Oh, and each battle lasts a quickly depleted three minutes; run out the clock and youll need to produce another coin yet the fight will continue with both monsters health partially refilled. Speaking of which, the amount of energy you recover after a successful victory is completely dependent on the collateral damage inflicted on your surroundings since your last continue, meaning that you could conceivably start the next face-off with practically no health.

So in the arcades this game is a money pit. Thats nothing new for a coin-op, but in its own way the home cart is even worse. Plunking another coin when youre defeated lets you resume the fight with the timer reset and your health fully restored, but the home version only gives you six credits total. That would be fine for a *real* fighter, but not this  especially since it also fails to give you access to any of the dipswitch settings, namely the time limit and difficulty level. Considering that AES carts are expensive as hell and intended to bring the arcade home, this is total bullshit.

Giant monsters are cool. Giant monsters who beat you to a pulp and take your lunch money are not. Yet hard as it is to believe sometimes, King of the Monsters was indeed quite popular in its day, which I think we can safely attribute to an imaginative premise crushing its very questionable execution underfoot. At least it did until the sequel mucked things up even worse and utterly killed the series momentum. Its worth pissing away a quarter or two in exchange for some mindless destruction, but it gets old fast; Monsters all too evident flaws simply dont stand up to prolonged or repeated play no matter how awesome the concept might have been. And you hardcore NeoGeo fans will want to think twice before adding this one to your collections, lest you find that those fond memories of noisy arcades and greasy pizza parlors of long ago have been generously smeared with the treacherous haze of nostalgia. For then youd be left much akin to the city of Tokyo: depressed.

If you enjoyed this King of the Monsters review, you're encouraged to discuss it with the author and with other members of the site's community. If you don't already have an HonestGamers account, you can sign up for one in a snap. Thank you for reading!

© 1998 - 2022 HonestGamers
None of the material contained within this site may be reproduced in any conceivable fashion without permission from the author(s) of said material. This site is not sponsored or endorsed by Nintendo, Sega, Sony, Microsoft, or any other such party. King of the Monsters is a registered trademark of its copyright holder. This site makes no claim to King of the Monsters, its characters, screenshots, artwork, music, or any intellectual property contained within. Opinions expressed on this site do not necessarily represent the opinion of site staff or sponsors. Staff and freelance reviews are typically written based on time spent with a retail review copy or review key for the game that is provided by its publisher.