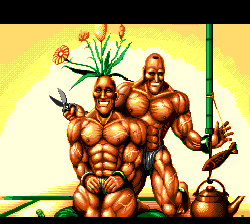 Take Arnold Schwarzenegger. Careful, don't mess the hair. Dress him in full tough-guy Terminator regalia: cool shades, black leather jacket, and even some pants -- unless of course you want some major manliness flopping about. Hand him a gatling gun (loaded), some manner of experimental jetpack, then toss him into a sidescrolling shooter and let him wreak havoc with burly Arnold gun and brawny Arnold fists. Sounds pretty cool, right? Toss in a twin brother (no, not Danny Devito) for some two-player simultaneous action. If you've played Forgotten Worlds, you have some idea what I'm getting at here. Basically, I'm talking an airborne Contra, with multi-directional attacks and hand-to-hand combat.

Nice idea, but that's not quite what NCS-Masaya, the folks behind the fantasy Strategy-RPG Langrisser (aka Warsong), had in mind. What was their idea? First, tear off all Arnold's clothes -- even the jetblack shades. Go ahead and slip on a dainty thong: no need to anger the prudish censors. Next, break out the electric razor, shaving away ALL of his body hair! Don't let Arnold hide his bone-bald head (the one atop his shoulders) in shame, because you'll be needing to drill in there. Grab the power tools, bore a gaping hole straight through his skull, and Voila! From the closet to your console, meet SAMSON and ADON, the bold and beautiful masculine, ripped, hole-headed protagonists of Love! Super Big Brother (Ai Cho Aniki).

Now, if you had a huge gaping hole in the top of your head, what would you do with it? Would you adorn it with an attractive beret? Or perhaps even cram a brain somewhere in there?

HEAVENS NO! Stop thinking for yourself and just let the Langrisser people do their thing. The buff, empty-headed twin bodybuilders in Love! Super Big Brother use those holes for a variety of far more useful ends than as mere braincases. First and foremost, the (upper) head's orifice serves as a point of discharge for blazing balls of light, the heroes' primary means of eliminating phallic fish and Bare Naked Men.

Another use for the hole? As shown in the opening cinema, one of the bodybuilders (Samson, he's the one wearing the thong) attentively prunes some flowery houseplants, sprouting from his loincloth-clad partner's cranial vase.

The shrubbery has nothing to do with the game. It's just there. The major use for the odd little orifice is as an implement of destruction. However, the homing orbs of light that drip from the hole are rather slow and puny, often requiring three or more blasts to take down opponents. That's where strength comes in -- there's a reason that Adon and Samson are ripped to the limit!

Flex to the right, flex to the left, flex up, flex down, flex flex flex! With each showcase of steroid power, enemies will EXPLODE in awe of such muscular magnificence. Pump those pecs to build up testosterone, and eventually you'll release a climactic stream of pure, white . . . light . . . incinerating walking venus mantraps, butterfly-men, and airships (operated by naked engineers), while capricious carnival medleys and fast-paced dance numbers pipe through the speakers.

With eight or so special Flex Attacks, there are plenty of methods for mayhem. At first, some of these seem a bit difficult to manage. To launch a Stream of Shooting Stars to the right, you have to press Left, Right, then Button II. Nothing too complex (just like Guile's sonic boom, if he were wearing nothing but a thong), but not a sequence that lends itself to repeated fire. But the developers must have caught this during playtesting, because if you hold Button II, you can then just tap left, right, left right, et cetera -- and launch stream after stream of Shooting Stars! The instruction manual doesn't mention this trick, so the game seems a bit unwieldy at first. But as you discover such nuances, things become much easier to handle. 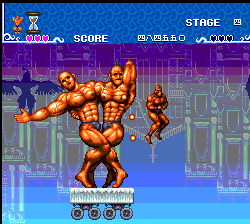 But if you still have trouble taking down the enemies, don't fret! Samson and Adon aren't just bodybuilders -- they're trained in nude ballet! Tap the other button, and your adept alter-ego performs a pirouette. While twirling, any bullets or oncoming enemies will simply slide off your oily, naked body. This might sound simple: "Just spin through the whole damn game." WHAT?! You're still questioning the Langrisser people?! No, there's a time limit, you see -- you have to kill a certain number of foes (otherwise the stage won't end), and if you waste that precious time tra-la-la spinning in circles, you'll never get anywhere. You've got to be offensive -- but being able to dodge adds a lot of strategy to the game.

Take the Cosmic Ballroom, for example. See those two naked men holding hands on the rolling iceblock? Yeah, you could try to shoot them down with your Sexy Shots. But being fairly large, the Masters of the Nudie-Dance can take a lot of pounding before they collapse. However, if you shoot the lovers as they approach, then spin as they crash into you, and fire a Shooting Star up their backsides -- that way you can beat them down Big Brother style. And all while listening to an eclectic, CD-audio soundtrack.

Carnival and techno ditties are only the beginning. Fly through the parallax-laden Redwood forest (trees with faces!) and listen to Gregorian chants in the background ("Aaaaa-ni-kiiiiii"). The mid-boss is the fancy type of foe you'd expect to see in a Treasure title: a Robin Hood lookalike, surrounded by a spinning sphere of greenery. Twirl to avoid his vicious Autumn-colored leaves, and lash back with muscular spasms -- accentuated by sharp, masculine grunts (a stark contrast to the vocal operatic piece flowing from your TV set). There's track after track of excellent, diverse music here, and it's surprisingly fitting in the game's context.

And of course, there's no shortage of skin. There's enough flesh here for a thousand fantasies! ...not that I fantasize about men's flesh, or anything. However, even though each level is decked out in steroid-buff graphical, musical, and creative glory, Love! Super Big Brother comes up a bit short, weighing in at only four power-packed levels. To its credit, each level is comprised of three stages, and it took me several days to succesfully finish the game. But still, it would have been nice to visit a few more locales -- not that the underwater swim, the city streets, and the asteroid belt left me unsated. 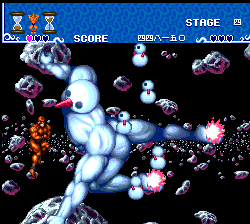 But one logical question remains:
"WHAT THE HELL IS GOING ON???"

Well, think about it. It would be easy to chalk this up as just another one of those quirky Japanese games (although this one makes most others pale by comparison). But there's more going on here. The heroes themselves are phallic (bald, with hole in the top of their head). But don't let that stop you from enjoying the game! In fact, the over-the-top sexual imagery makes it all that much more exciting! ...not that the phallus (human or otherwise) excites me. In fact, nothing would bore me more than to see male genitalia everywhere I turn, be it mixed in with the supermarket zucchini, flopping across the boss's desk, or subliminally inserted into mainstream motion pictures. But here, it's cool, funny, and even refreshing.

Refreshing? Yep. Quirkiness and innuendo aren't what Love! Super Big Brother is about -- it's a celebration of male beauty, disguised as a beat-em-up/shooter hybrid. Sure, that sounds a little strange. And it's definitely funny to see in action. But that's because we're not used to seeing it -- especially not in the sexy-babe, big-breasted world of video games. This time around, it's a hunky-dude, big-chested world. The final verdict? Well, it's certainly not boring, and it's even good. Ai Cho Aniki is absolutely one-of-a-kind (there's really nothing else quite like it), and that alone gives me reason to hang onto it. That and the "Happy Headlock" cover art of Samson and Adon holding each other . . . just don't let your friends see it.

© 1998-2022 HonestGamers
None of the material contained within this site may be reproduced in any conceivable fashion without permission from the author(s) of said material. This site is not sponsored or endorsed by Nintendo, Sega, Sony, Microsoft, or any other such party. Ai Cho Aniki is a registered trademark of its copyright holder. This site makes no claim to Ai Cho Aniki, its characters, screenshots, artwork, music, or any intellectual property contained within. Opinions expressed on this site do not necessarily represent the opinion of site staff or sponsors. Staff and freelance reviews are typically written based on time spent with a retail review copy or review key for the game that is provided by its publisher.