You
(yes  you!)
have been selected for a fabulous three day weekend amongst the virginal beauty of Crystal Lake! Yes, its time to enjoy the sweeping magnificence of nature by way of hearty constitutionals through the secluded forests and the consumption of suspicious herbs! Amenities include private cabins with hot running water for those steamy soapy shower scenes, complementary edition of Strip Monopoly, and hideously deformed undead psychopath looking to carve up sex-crazed teens with his axe. See you (or at least the remaining bits and pieces) on the trails!

In reality the NES adaptation of Friday the 13th takes this laughably awful (and sometimes merely awful) saga full of campy dialogue, bloody hatchets and lacy perfumed underthings, only to cast them aside in favor of an awkward mix of action and strategy. And while it initially appears to offer a bit of depth over the usual run-and-jump mayhem, sadly the end result is a game thats just as inane as it is unconventional. Then again, if you look at it from just the right angle (lopsided), I suppose it could be considered an early glimpse into the genre of survival horror  an extremely early glimpse.

Speaking of early visuals, the first thing youre going to notice is that the graphics are a hearty slice of blah consisting of the same dirt trail and a dull horizon that idly scrolls by as you jog around in circles. Our signature antagonist resembles nothing so closely as a massive purple blob  an unusually deadly purple blob perhaps, but a blob nonetheless. Meanwhile your misadventures will be accompanied by bouncy music thats incredibly out of place. Better take a moment to let that tune  all eight notes of it  sink in, because youre going to be hearing it loop over and over again seemingly without end until you simply cant stomach it anymore and reach for the mute button, only to realize its haunting melody has burrowed deep inside your brain and you cant get it out, the notes constantly haunting your sleepless nights until you cant take it anymore and you think that you just might  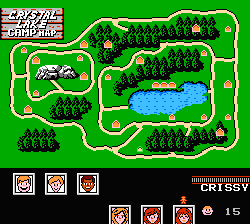 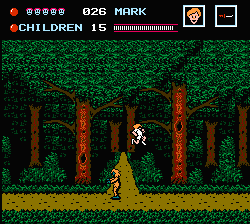 Oh, the reason youll be running around in circles is because:
a.) the campground consists of a few circular trails that are nestled within each other, in addition to a cabin filled with precious children at the lake in the center, which you can probably better visualize if you think of a really demented dartboard, and
b.) theres really nothing much to do in this game other than gradually wearing down your blobby plum-colored nemesis whenever he decides to drop in and attack you.

Well, thats not entirely true  the trails are crawling with orange zombies for no apparent reason other than to drain your health, so youll have to best these menaces by throwing rocks at them. Slow, clumsily lobbed rocks that feebly strike their target to inflict barely perceptible damage despite producing the most annoying sound effect Ive ever heard. Fortunately you can get better weapons (like a slow, clumsily tossed dagger) as well as items (like medicine to heal your many wounds) by jumping around wildly like an idiot, whereupon they randomly spring into existence above your head. And just when you least expect it, youll wander right into the loving arms of Jason Voorhees!

After striking this masked killer a dozen or so times, hell flee back into the shadows to lick his wounds . . . for the time being. But despite being little more than a shambling corpse, Jason isnt always going to just sit around and wait for you to idiotically soar into his clutches; no, surprisingly enough his artificial intelligence is actually fairly logical. Instead hell frequently go after those children moronically tucked all the way in the center of the map, or even ambush one of the other camp counselors youre not currently playing as. Hold on, did I neglect to mention that there are six playable characters? I did, didnt I? Its probably because theyre all the same, other than the four who are so slow, un-athletic and generally crappy that it actually pains me to recall their existence. Good thing you can have your more able types pass along weapons and items to their nerdy brethren, even if it wont help the losers embarrassing lack of speed and jumping ability on the trails. In any case, you can freely switch between these sluggish chunkmonsters by entering any of the cute little cabins dotting the landscape, which admittedly does introduce a bit of planning into the mix. 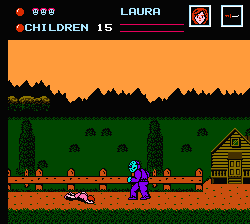 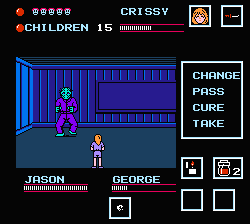 See, everyone has split up so they can cover more ground, or something equally brainless, so theyre situated all over the encampment. What with your being instantly alerted to an unseen attack all but assured thanks to the persistent whining of an obnoxious siren, you can quickly switch over to them as soon as possible. Or, if the endangered teammate is a weak defenseless coward (very likely), you can dispatch your closest real fighter over there pronto  because if the timer overhead runs out before you get there, youll be scraping them off the walls. Apparently anyone youre not controlling directly wont put up even a token effort to defend themselves; Jason also seems programmed to go after the injured characters first, no doubt to finish them off and leave your remaining forces dwindling, which is actually pretty smart  if exasperating.

But should this gruesome ghoul be after the little ones, youd better hope somebodys in place to reach the lake before its too late, as their already puny numbers will slowly begin to decrease even before the clock runs out! Youll have to hurry so your would-be rescuer can (slowly) row across its deadly waters and take a fair amount of unavoidable damage before finally confronting the fiend  just remember that axe beats machete, torch beats axe, and bloody everything beats rock. Hunting Jason while hes mauling someone in their cabin also changes to the screen to a pseudo first person view that forces you to navigate through its empty twists and turns in search of his hiding place, which is pretty unnerving . . . when youre eight. Its still a pretty cool thought when coupled with his sudden appearances; even when stepping into a random cabin to switch characters, you may find Jasons health meter greeting you at the bottom of your screen.

When youre not busy with the constant rescue attempts you can also become hopelessly lost in the forest or the local caves, but the weapons you can find there arent remotely worth the trouble of battling rabid wolves and disembodied heads when you discover similar arms right on the trails. Generally speaking, if youre going to program a sprawling maze into your game, you should probably subsequently program a good reason for me to actually go there. Unfortunately, thats about all there is to the experience: sprinting (or plodding) around in search of supplies while making repeated side trips to fend off your relentless uninvited guest  who suffers only minimal damage with each appearance and draws things out for far too long.

Should you manage to outlast Jasons health bar youll find that he predictably revives not merely one but twice, each time growing noticeably stronger as well as far more vicious in the frequency of his attacks. Pair that up with your teams overall pathetic ineptitude and things certainly become extremely difficult  not to mention aggravating and tedious. Its no wonder the box boasts of its Power Player status; most normal people arent dedicated enough to creep across a lake thirty times and fling rocks at zombies for an hour, only to have their one decent character abruptly slaughtered by a pissed off, machete hurling undead linebacker and start all over again.

Honestly though, the thing about this game that really strikes me as being the most notable is the fact that it managed to get approval from Nintendo of America despite its themes of teenage counselors and even helpless children being mowed down by a homicidal maniac. Far from beating around the bush, they even blatantly state the obvious by breaking the most sacred of all Nintendo edicts:

No one ever dies in Nintendoland  theyre either defeated or fall. Oh sure, occasionally people may fly up to heaven or spontaneously transform into bouncing currency that you can spend on a delicious pizza, but here they just slump to the ground a lifeless hunk of meat! Theres no blood and the death scenes are nothing compared to the Atari 2600s Halloween, but just the same I suspect more than a few budding NES gamers were scarred for life during their formative years. Dont scoff; remember that were dealing with the same group of sissies who hid under their beds and cried to mommy just because Nintendo Power stuck Draculas severed head on the cover.

© 1998 - 2023 HonestGamers
None of the material contained within this site may be reproduced in any conceivable fashion without permission from the author(s) of said material. This site is not sponsored or endorsed by Nintendo, Sega, Sony, Microsoft, or any other such party. Friday the 13th is a registered trademark of its copyright holder. This site makes no claim to Friday the 13th, its characters, screenshots, artwork, music, or any intellectual property contained within. Opinions expressed on this site do not necessarily represent the opinion of site staff or sponsors. Staff and freelance reviews are typically written based on time spent with a retail review copy or review key for the game that is provided by its publisher.